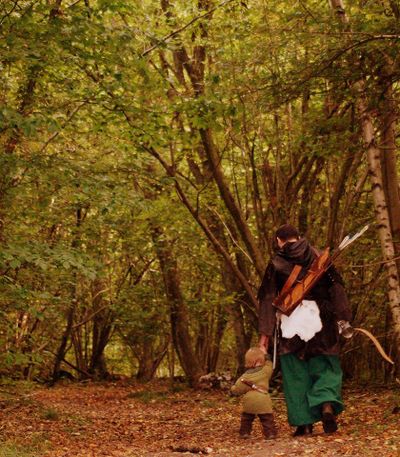 Everyone who walks the trods with a striding knows they are fighting the Vallorn.

The counterpart to the Steading is the Striding. These are travelling groups that largelly follow the established routes of the trods around the Empire. Walking the trods is necessary to weaken the vallorn to allow the Navarr to attack it. The trods pass through all nations of the Empire, so now many travellers prefer to use the Navarr trods as trade routes and roads, and villages and resting places have grown up over the years near those routes.

Stridings vary significantly in size and make-up. In a normal striding, most participants are on foot, usually with a few narrow wagons pulled by oxen or similar beasts to carry essential supplies. Others take the opposite approach, using larger covered wagons which can serve as living quarters, especially if they are transporting tools such as books or smithing materials over great distances. Many Navarr are comfortable walking for days on end, and the power of the trods supports them and enhances the endurance of newcomers.

The stridings support themselves in three ways: they carry staples with them; they contain hunters who range to either side of the Trod staying alert not only for food but also potential dangers; and they trade with the people they encounter en-route. For some Imperial citizens, the Navarr are the only regular contact they have with the Empire. Navarr stridings are usually welcome, as they bring messages and news of events elsewhere in the Empire.

As well as the dark forests that Navarr now think of as home, the wild places between towns, burghs, fortresses and temples are hardly safe and the Navarr are practical about these dangers. They travel in well-armed groups and set regular watches. As they travel they remain alert for danger, and it is often Navarr who bring word of potential threats to their cousins in the other nations.

A new Navarr striding is created when an individual chooses to go in a new direction. They generally become leader for a new striding formed of those who choose to follow them.

Navarr stridings are fluid things, with individuals and families moving from one to another as the mood takes them. The Navarr encourage individuals to choose the striding that is travelling in the direction they want to go, a philosophy that underpins their approach to life. In theory, this choice is made anew each time a Navarr comes to a crossroads although in practice most stay with the same striding for years.

You can learn about some of the more prominent stridings currently active in the Empire here.