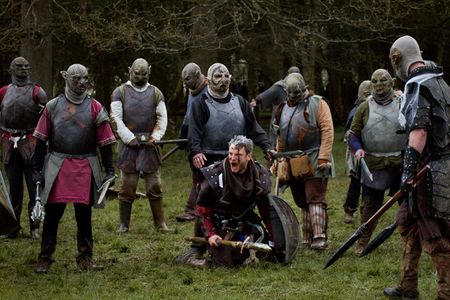 Thorns stand ready to make sacrifices to serve their people.

Thorns are the professional warrior caste of the Navarr. Like brands, Thorns make an active decision to commit themselves to their chosen course; they literally swear to be ready at all times to fight in the defence of their community. They mark their oath, usually with a tattoo but many also choose to don warpaint each day. This ritual ensures that they remain focussed regardless of where they are. By marking themselves out in this way they make their identity and pledge clear and remind others that they are ready to fight.

The Navarr consider surprise to be one of the most effective weapons to use in battle, so they are particularly wary of being caught unawares. The Thorn philosophy is one of constant preparedness. They are practical about the actual level of risk involved, they don't set guards when none are needed, but they strive to maintain a vigilant readiness and ensure that they are prepared to defend themselves when the time comes.

Most Thorns are warriors, but anyone who can wield a weapon - even magicians who are skilled with battle magic - can take the Thorn pledge. The purpose of becoming a Thorn is to ensure that you remain vigilant and ready for battle, to devote yourself to fighting for your community and to make your purpose plain to other Navarr so that they can find martial help when they need it.

There is a great deal of similarity between the oaths of the Thorn and those of the brand or the Vate. As a result those Thorns who feel they are best placed to lead their fellows are usually Brands as well and many Thorns with some mastery of magic choose to become a Vate.

Thorns are not known for their timidity and reserve. Their military doctrine, known as the Irrevocable Blow, states that war should be fought swiftly, without mercy or doubt. Isaella, the most infamous Thorn in Imperial History, murdered mad Emperor Nicovar in 209 YE. 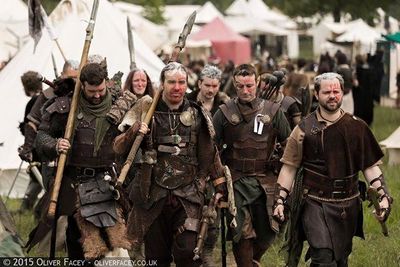 Thorns band together to face threats that would defeat a lone warrior.

It is rare that a problem can be solved by a single Thorn; cooperation between many Thorns is usually required to defeat an enemy. The Thorns in a large steading or striding will usually fight together, alongside the other warriors from the community. But when preparing for battle, lone Thorns from smaller communities often band together under a single banner.

These groups are called Thornborn, and most have an identity and history of their own. They are often at the forefront of important conflicts and many members are proud of their group's reputation for skill and ferocity. Most are led by a Thorn who is also a Brand, but not all. Thorns regard themselves as having taken a vow equivalent to that of the Brand, so their first requirement is that they follow another Thorn.

Die today? By Ambition, I hope not! We are the Thorns of Navarr, and my story is not yet finished.

Brynn Mourne, Brand, before the Battle of Gulps Deeps
Retrieved from "https://www.profounddecisions.co.uk/mediawiki-public/index.php?title=Thorn&oldid=65665"