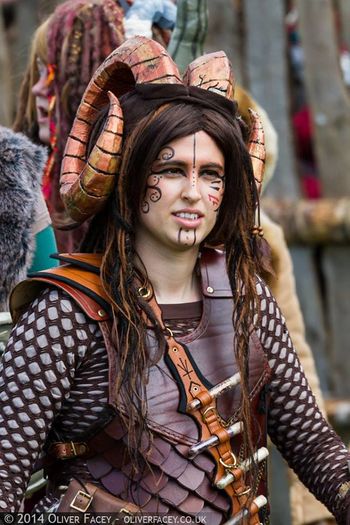 Leadership is as much about knowing when to listen as when to speak.

Throughout their history the Navarr have always adapted and followed the most suitable people required to meet the challenges of the time. It is expected that their leaders will be Brands. The Navarr see leadership as an important but onerous responsibility, with the leaders viewed as servants of the community. Although not all Brands are leaders, Navarr who persistently try to offer leadership to others who haven't become Brands are regarded with suspicion. The purpose of leadership is to give direction to the community- it should be for the benefit of everyone in the Striding or Steading - in the Navarr eyes you can't be a fit and proper leader unless you have become a Brand first.

Rather than formally appoint their leaders, the Navarr follow those Brands whose leadership seems wisest and most effective. The Navarr have no need of mechanisms to remove their leaders; since their leaders have no formal authority their importance comes from the people who elect to follow them and do what they say. If a leader makes unwise decisions, if people have become so unhappy with the current leadership, then they are expected to find themselves a new leader.

In theory the leadership of a Striding or Steading is totally fluid - in practice the Navarr are not gadflies. They understand that leadership is difficult and arduous and that leaders must often make unpopular decisions. Most Navarr strive to give their leaders as much support as they can and it is relatively rare for them to leave a Steading or Striding simply to follow a new leader. The fact that they can do this at any time, however, underpins their social system; the Navarr feel it ensures their leaders stay focussed on serving their community but also helps to prevent grumbling or whining about decisions that have been made. Individuals are expected to either support their Brand's leadership or move to follow a different Brand.

It is common for a larger community of Navarr to have more than one Brand providing leadership, each with an area of responsibility or specialism. Such communities operate either through the informal co-operation of the Brands, or employ a system where the Brand whose responsibilities apply most appropriately to the current crisis takes the lead. When Navarr groups meet, the Brands usually cooperate or choose to follow one of their number who seems to offer effective overall leadership if that is required.

The Navarr appoint the Senator for a territory by communal agreement. Those who would speak for the territory step forward; the candidate must be Navarr but may be from any territory. Once the candidates are clear, the Navarr present choose who to stand behind. The process is very fluid, it is common for individuals and groups to move to coalesce support where it appears to be most effective. Once it is clear that everyone has made a choice, the individual with the most support becomes senator for the territory.

Only Navarr whose personal resource is located in the territory may participate in the vote. Although Stridings travel around the Empire, individual resources are always in a territory, so this is the legal basis for determining where you may vote. The law means that Navarr whose personal resource is in a non-Imperial territory such as Liathaven or Brocéliande cannot vote in a senatorial election (although they can still volunteer themselves as candidate for the title of senator).

Anyone who has recently taken part in choosing a senator who then moves territory is forbidden from voting in an election in their new territory until a year has passed.

Navarr Senators have a reputation for tactical voting. They accrue political capital with Senators of other nations which they use on key votes, either for the good of Navarr as a nation or for the Empire as a whole.

The current Navarr senators are listed below - see the individual territory pages for a full election history for each position.

Senator Jonquil. You would interdict the passage of Ivawr's Striding through Dawn because of what? Some nascent ill-founded fear that our journeys beyond the borders of our glorious Empire will bring a barbarian horde in its wake?

Your Imperial Majesty, it was Riordan who risked all to bring news of the Scaled Host’s march on the Brass Coast. It was the bravery of Pwyll of Therun that lured the Black Byter into the embrace of the Vallorn and it was the Thornborn of Mourn – the like of whom we shall never see again – who defied the Swarm of Vasseir to see your Lord Husband safe to this assembly.

We have walked the Trods of these lands since the Sun and the Moon began their heavenly dance, we have witnessed the deep places and we have guarded your hearth. We leave behind the light so you can rest behind stone-walls. We have earned our place in this magnificent endeavor and we shall claim our birthright. Come, walk with us, noble Jonquil. We have no fear – let us banish yours.Transcript, Senate Meeting

A list of well-known steadings and stridings who have attended Anvil in recent years can be found here.