Centuries before the Empire was formed, humans already lived in the fertile plains around the Bay of Catazar. They built cities, organized themselves into loose kingdoms, and formed alliances with one another. Even then the humans were threatened by the orcs. At the heart of these kingdoms was the flowering of civilisation that served as the forerunner of the Navarr. Navarr stories call this nation Terunael and record that its cultured cities were run by its magicians. 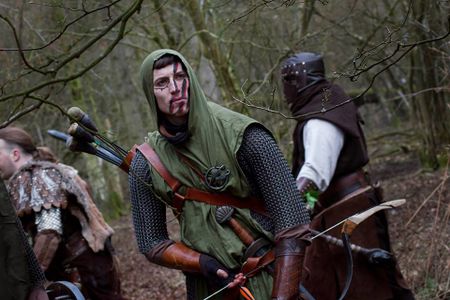 In the ongoing war against the orcs, Terunael increasingly relied on magic. Over time the stresses of constant magic use took their toll, and without warning the rituals around Terunael unwound catastrophically, creating or summoning the Vallorn into the heart of their kingdom. The cities were consumed by spreading forest, their people attacked by monstrous insects and deadly plants, and though they tried everything to fight it, in the end they had no choice but to abandon their homes.

The Navarr are descended from those who followed the eponymous heroine Navarr and her lover Thorn who swore an oath to restore the civilisation of Terunael. Bound and branded by their oath to regain the cities, they fought desperately to destroy the Vallorn. When it became clear that their enemy could not be defeated by force of arms alone, a magical solution was sought. Navarr and Thorn gave their lives to set in motion a powerful Ritual that would eventually allow the Navarr to defeat the Vallorn.

The Ritual required the Navarr to walk paths of magical power, called Trods. These migrations drew off the life-energies of the Vallorn, weakening it. The further the Navarr travelled, the stronger the effect. Once the Vallorn was sufficiently weakened in an area, then the Navarr were able to attack, reducing the spread of the Vallorn. 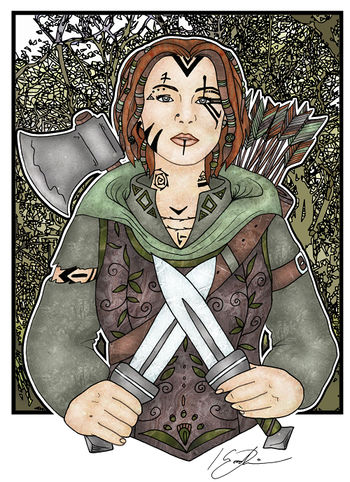 The arrival of humans from across the sea drove the orcs from the fertile lowlands. Initially the Navarr viewed the newcomers with suspicion, but they soon realised that these people were potential allies. They made contact, seeking to ensure the safe passage of their stridings, and encouraging the new humans to focus their attention on the orcs rather than engage in costly squabbles with each other.

During this time, Navarr traders introduced the Highborn to Vinum. Vinum was a sap that could be cultivated to a chewable gum which was relaxing, aiding with restful sleep. Highborn chapters experimented with Vinum and one - the Scions of Atun - learned how to process it into a new form. This form which they called liao, possessed many unique mystical qualities, including the ability to unlock visions of past times and places.

A Navarr Striding were among the first people to hear the Empress' message of unity. Its leader, Myfanwy of Hercynia, was one of her earliest companions, protecting and guiding her through human lands. After the historic encounter, the Navarr carried her message to anyone who was prepared to listen. They helped arrange the initial meeting at which the foundations of the Empire were laid. The goals and philosophies of the Empress struck a resonant chord deep in their hearts. The Navarr Stridings became the standard-bearers for the Empire, carrying its message to the divided human nations.

Most Navarr could see that the Empire represented a great opportunity for them; a chance to drive back the barbarian orcs meant that their stridings could travel further than ever. The more perceptive saw something deeper, that the proposed Empire was not just a tool to help them regain their cities, it was the first glimmer of the civilisation their ancestors had once enjoyed.