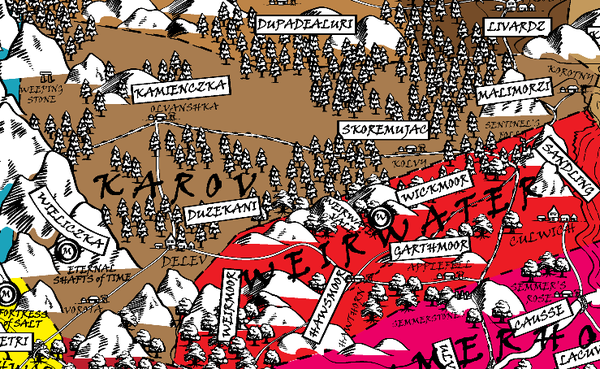 The rich heartland of the nation, and the wealthiest territory in terms of timber and amber, this is where most outsiders think of when Varushka is mentioned. The vales here exist among rich forests, where they have not been cleared to make way for small farms. Karov has the largest towns in Varushka, and the majority of its boyars come from this relatively civilised territory. A great deal of trade happens in Karov, with wagon trains and river barges carrying raw materials south to Temeschwar or Weirwater and north to more isolated valleys who are in need.

Despite its settled nature, it would be a mistake to think the land is entirely tamed and great tracts of wilderness still remain, often home to particularly malignant – if quiescent – sovereigns. These creatures awaken or emerge from time to time with often tragic consequences - so the wise ones take care to ensure each generation remembers the warning stories about creatures whose last depredations may have been in the times of their grandparents or great-grandparents.

Karov was one of the first places settled by the Vard during their early conflict with the Ushka. They ruthlessly cleared areas of forests to build their settlements and some of the oldest towns show clear influence of their shared heritage with the Steinr of Wintermark, especially in the west. Indeed, there are several old battlefields in western Karov where Vard and Steinr, and later Varushkan and Wintermark, clashed in the distant past long before the foundation of the Empire. A number of very old tales from Karov include two siblings who romance a stranger; the former represent Vard and Steinr, the latter the Ushka. Invariably the elder sibling wins the affection of the stranger, and the younger angrily retreats to the west. This is a highly stylised and historically dubious version of the founding of Varushka, but it is popular nonetheless.

On the whole, the folk of Karov enjoy many of the finer things in life - good food, good drink and regular festivals. Many towns and villages in Karov employ Stzena, local musicians who perform at local civic events and celebrations; there are several vales here dedicated specifically to the training of Stzena, and recording and preserving the music and songs of the Varushkan people.-

Karov is perhaps the most peaceful of the Varushkan territories. Until Karsk fell to the Thule, they had enjoyed three and a half centuries of peace. In 372YE the Thule attempted to push through Malimorzi and briefly occupied the settlement of Korotny, but they were driven back within a season by the combined forces of the Northern Eagle and Golden Axe. Raiding parties still creep across the border from time to time, but for the most part Karov has been unmolested. 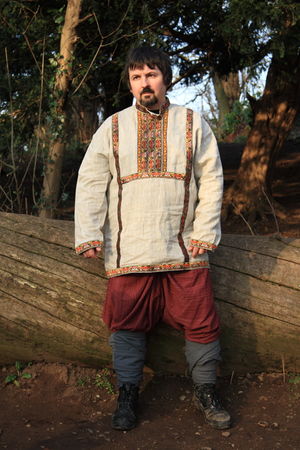 The oldest and proudest of the vales that guard the road from the Semmerlak to Seren and the south, Delev is a hub for the many smaller vales dotted around southern Varushka. It has a complex rivalry with Temeschwar, which outgrew its parent and then left the family to join the League. Delev is again the foremost trading town in Karov, which suits it well. Despite the intervening centuries, there is still some bad blood between the citizens of Delev and those of Varushkan descent in Temeschwar. A particular bone of contention are the Eternal Shafts of Time, which the Temeschwari attempted to "take with them" when they seceded. Several Karov families at least keep alive tales of treachery, ingratitude and attempted theft.

In early 377YE a sequence of fortified watchtowers and walled camp sites was erected around Delev, and in various strategic points along the road to Seren, serving as secure bases of operation for bounty-hunters and wardens concerned with both bandit and wolves alike. Overseen by Henry Ward (senator for Upwold) as part of a larger Senate initiative to provide protection to towns throughout the Empire, the defences are not sufficient to qualify Delev as a fortification but have already helped reduce casual outlawry throughout the territory. They have also prompted some discussion about further work, and the value of building a complete system of forts and castles in the vicinity of this vital trade hub.

Shortly before the Autumn equinox 380YE, work was completed on the offices of the Overseer of the Westward Road, a ministry dedicated to coordinating trade between western Varushka and the orcs of Skarsind. It forms the eastern arm of the Northern trade network.

This is a great standing stone atop a mound in Kamienczka near the border with Wintermark. The stone appears melted, like the wax of a candle, as if it once stood in a limestone cave. No grass will grow on the mound, and there are several stories of unnatural disappearances in the vicinity. According to legend, roads built in the vicinity of the Weeping Stone fall into ruin with preternatural speed, and any building that can be seen from the stone is likewise doomed to fall apart. The tales say that within three years no two stones will still lie side by side, and there are enough stories of collapsed bridges, unexpected raids and disastrous fires to support this belief.

In legends this locale is sometimes associated with the Sovereign known as the Tallowman, although this connection might simply be based on the way the "melted" appearance of the stone.

The Eternal Shafts of Time

The Eternal Shafts of Time are a Bourse resource located in Vorota. Custodianship of the Shafts is an Imperial Title that brings with it a Seat on the Imperial Bourse. It produces 27 Imperial wains of mithril every season. The seat is allocated during the Autumn Equinox, to whichever Varushkan candidate receives the most support from Varushkan owners of mine and forest resources.

This lightly wooded region is where Delev - one of the major Varushkan trade hubs - can be found. Duzekani is well-known for the fine quality of its bees, as well as for some of the best forests for finding iridescent gloaming in Varushka (the land is often too cold for the butterflies that produce the rare material to truly prosper). For the most part, however, the woods of Duzekani have been cleared or tamed - this is the civilised heart of the most civilised territory of Varushka.

The least settled region of Karov, Kamienczka has a reputation for being an unfortunate place to be born. Most of the blame is aimed squarely at the Weeping Stone which stands in the foothills to the west. The only vale of any great size is Olvanshka, home to several Warden fellowships standing guard on the Sovereigns believed to sleep in the hills to its north and west - and who keep a watch over the Weeping Stone for good measure.

The easternmost of the regions of Karov, and the one most in danger of invasion when Karsk was in the hands of the Thule. A great deal of trade comes through Malimorzi from other settlements along the shore of the Semmerlak. Much of that trade comes through the bustling port of Korotny, built on the north-western shores of the great freshwater lake that allows trade with Dawn and, at one time, Holberg. It is also known for one of the largest fishing fleets in Varushka.

Some of the more entrepreneurial minded inhabitants of Korotny dream of how their fortunes might rise if the Barrens was brought into the Empire and their vessels could trade the length of the southern rivers to Therunin. From time to time, exploratory expeditions set forth to the eastern shore, scouting lands believed to be under the thrall of the Druj or perhaps exotic foreigners. Some return with goods, tales, and a measure of pride. Most do not.

Quality: Forest
Forested Skoremujac is a centre for fur-trapping and the production of both ambergelt and dragonbone. Much of this industry revolves around Kolvy. The locals know well that wealth attracts wolves and the hunting is done subject to great care, attempting to leave as little disturbance to any slumbering horrors as can be. Today, Kolvy is primarily known outside of Karov as the site of the "last" major engagement between the Varushkan armies and the ex-slave orc forces during the Orc Rebellion, and is said to be where the agitator who started the revolt lost his life

Quality: Hilly
The people of Wieliczka have the closest ties of any Varushkan to the people of the League. The fortified settlement of Vorota was once a vital guard against the people of the south, and its folk consider themselves the last vale of true Varushka on the road south. It is home to some who chose to leave Temeschwar rather than leave Varushka, and many don’t have the warmest of feelings towards the prodigal city. Indeed, when the Temeschwari ejected their criminals during the notorious Night of a Thousand Torches some of the most organised made it as far as Vorota and laid siege to the town. The settlement has been fortified of late due to the Jotun incursions in Wintermark, and the guards are even more suspicious of travellers than usual.

As an Imperial territory, Karov is represented by a senator elected in the Summer. This title is currently held by Vuk The Wolfeater; it will be reelected at Summer Solstice 384YE. The table to the right shows the citizens who have been elected to hold this title in the years since Empress Britta died.