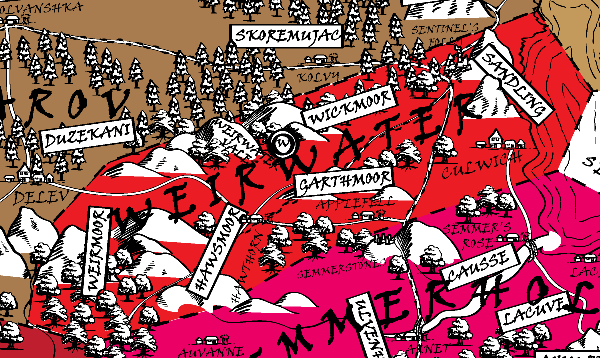 The craggy hills of Weirwater are home of many weavers, and the noble houses here seem to have more than their fair share of witches. The territory itself is scattered with deep forests, maintained untouched by the noble houses and inhabited by Eternal Heralds, exotic beasts and an abundance of rare herbs. The caves of Weirwater have a dark reputation with the people of Dawn, and are said to contain mysterious magics.

Legend has it that long ago the Earl of Sedaret pursued a crusade against several cabals of weavers who refused to recognise her authority. At the height of a great banquet, thrown by the Earl to celebrate her apparent victory over the weavers, a great bell began to toll and the castle and its surrounding village was drowned beneath great waves and unrelenting rain. It is said by the people of Culwich that on Winter nights of the new moon when the sky is clear one can still hear bells ringing in the depths of the great lake, and see lights that are said to be those of the drowned Earl and her noble household, still celebrating in the depths.

During the reign of Empress Varkula, a significant force of Druj crossed the Semmerlak from the east and invaded Weirwater. Fighting under the banner of the Shadow Wasp, the Druj invaded Weirwater with a flotilla of great rafts launched across the Semmerlak. The Druj were lead by a powerful Ghulai and her coven, who wielded the power of Spring magic against the Imperial defenders. With the aid of the Navarr - especially Megan Black Blood - the Druj were defeated - but not before they raised the oldest forests of Weirwater against the Empire. Since then, there has been no significant incursion across the Semmerlak ... but the folk of Weirwater remember.

A large town with a few outlying villages. Culwich has a long tradition of farming and is said to produce some of the best flax and wool in the Empire. The local merchants have influence with the weavers, who in turn offer them fine woven goods to sell to mutual profit. It was here or hereabouts that the first humans to live in Dawn landed. Culwich is now a rich port: goods and trade come to Dawn from Varushka through Culwich. There’s some trade to far-off Highguard, though to get there ships have to pass the shores of the Barrens.

A sprawling hill town in Garthmoor, surrounded by small farms. The people have a reputation for standoffishness, even with the merchants who pass through on their way to and from Karov and Semmerholm. While the area is known for its apple orchards, it is also known for “ ground apples” - a type of mushroom with an almost spherical head - which can be quite dangerous to those who mistake them for wholesome fungus. They grow on the ground, in rings, and the wise do not consume them without great care. Rumour has is that those who know the trick to preparing them can see into the Labyrinth, converse with ghosts, and perhaps more importantly avoid a lingering death.

The Weirwater Vales are a Bourse resource located in Wickmoor. Custodianship of the Vales is an Imperial Title that brings with it a Seat on the Imperial Bourse. It produces 23 Imperial wains of weirwood every season. Control is allocated to any Imperial citizen by open auction during the Summer Solstice.

In the centre of a small weirwood forest in Weirmoor stands Spiral Castle. Built in pre-Imperial times, it lies at the heart of a strong Summer regio. The earls of Spiral Castle have always been enchanters, and usually possessed of a strong changeling lineage. The household has been controlled by scions of the de Cassilon family, and many of the nobles who live there are descendants of Empress Richilde. Over the centuries, the inhabitants have become more and more insular, spending less and less time beyond the boundaries of their manor. Some members of the Imperial Synod have even expressed concerns over whether they are entirely human any more.

During the height of the Sun Queen's reign, the Imperial Senate agreed to a request that the resources of Spiral Castle be dedicated to the support and upkeep of the armies of the Empire, and of Dawn in particular. They created the title of Castellan of Spiral Castle to oversee the procedures needed to turn the weirwood and expertise of the castle's inhabitants into emergency support for Imperial armies camped in Weirwater.

For several decades, Spiral Castle was not reachable by outsiders; following the death of Emperor Hugh in 368YE the castle and surrounding forest abruptly disappeared behind a wall of swirling, chaotic mist. Attempts to communicate with, or reach, the inhabitants of Spiral Castle proved unsuccessful. Recently, however, contact was re-established with the deCassilons and the wall of mist brought down, leaving the house free to rejoin the rest of their nation - and providing the Dawnish people with a valuable new resource.

The Castellan of Spiral Castle was an Imperial title within the Bourse appointed annually by the captains of Dawn.

The town of Applefell stands in Garthmoor. Known for lightly wooded hills, Garthmoor has a reputation as an odd region, and many Dawnish ghost stories take place on the roads and in the woods here.

Hawksmoor is a land of wild hills and twisted woodlands. The only settlement of any size is Hawthorn, a small town of lush gardens in a hollow near the road to Delev. Hidden behind a forbidding hedge, it is home to a circle of witch weavers well versed in the intricacies of Spring magic. Their coven accepts only those who vouched for by a herald of Spring - although which eternal the herald owes allegiance to is not common knowledge. The hedge around hawthorn grows thick and tall, and those not welcome feel its thorns if they try and push their way in.

Best known for the town of Culwich, and for the fisherfolk that live in villages along the banks of the Semmerlak, the wide fields of the south slowly rise into the low wooded hills of the north. Atop one of these hills, overlooking the lake, stands the Sentinel’s Folly. The remains of this ancient, shattered stone tower rise high above the trees and are attributed to the paragon known as the Sentinel. The four storey white granite structure is weathered, but the remaining floors are reasonably sound and it is used variously as a reference point or beacon for sailors in the western Semmerlak, as well as a look-out post for keeping an eye on the woods of Karov to the north.

Quality: Forest
One the least settled regions in Dawn, the rolling hills of Weirmoor are largely covered by an old and tangled forest. In the north and south, well maintained roads link Weirwater with Delev and Astolat, but the heart of the region is wild and untamed. There are said to be trees in Weirmoor that were old before the Dawnish ever came to the Bay of Catazar. The local Dawnish nobles prefer the forest primaeval - Weirmoor is prime hunting ground and not only for game. Forest lions roam here, along with occasional packs of dire wolves or bears, and the occasional wyvern. The handful of noble houses in Weirmoor have a reputation for standoffishness, and several have a grim reputation.

The eerie Weirwater Vales stand in Wickmoor, between the extensive estates of the feuding House deCourney and House Seerkan. Their presence gives the entire region a reputation for strange events, usually blamed on whatever it is that haunts the weirwood trees.

As an Imperial territory, Weirwater is represented by a senator elected in the Summer. This title is currently held by Lady Eve Orzel; it will be reelected at Summer Solstice 384YE. The table to the right shows the citizens who have been elected to hold this title in the years since Empress Britta died.