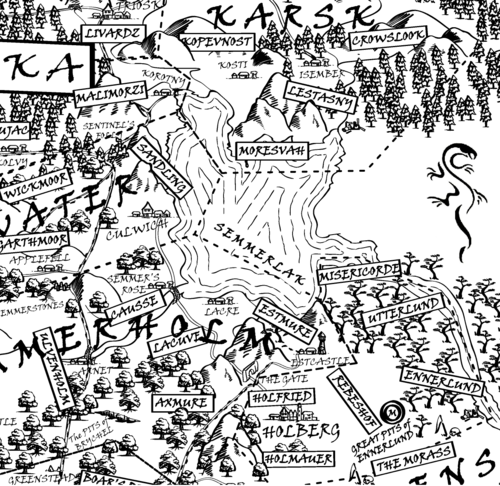 The Semmerlak is a great freshwater lake bordered by Dawn (Semmerholm and Weirwater), Varushka (Karov and Karsk), the League territory of Holberg and by the Druj lands of the Mallum. Rivers rise in Varushka, and in Ulvenholm, and flow down into the basin; a navigable river flows south along the borders of Holberg towards the distant Barren Sea in the Barrens. While it is believed to be navigable, the presence of hostile orc forces means only the bravest captains are prepared to risk the journey. The lake is shallow around the shore, but drops off very sharply. It is surprisingly cold, and in winter it regularly freezes in great chunks - though rarely does it freeze completely and the ice is treacherous and breaks easily under the weight of an armoured human.

Dawnish enchanters know that there are several places around the southern and western shores where regio connected to the Summer realm can be found. They tend to be within a stone's throw of the lake, or even within the water itself - there is at least one regio in Weirwater that exists entirely in shallow water and is said to be inhabited by comely youths who leave their magical realm when the moon is full to frolic in the shallow water. The nymphs are friendly to those who approach them with respect, but are capable of creating armour and weapons of sparkling water to defend themselves from anyone who addresses them rudely.

It has always been a little more unpredictable than it should be as a lake - prone to storms and odd tides. Islands appear and disappear from time to time. Seabirds avoid crossing it from north to south or east to west. There are several stories of fat fish pulled from the depths that speak in human tongues, promising riches or hidden secrets; stories of poached salmon that when cut open are discovered to contain magical rings or odd metal coins.

A legend from Weirwater suggests that the lake has expanded at least once since the foundation of Dawn. it claims that there was once land to the east of Culwich, ruled by the Earl of Sedaret. Long ago the last Earl of Sedaret pursued a crusade against several cabals of weavers who refused to recognise her authority. At the height of a great banquet, thrown by the Earl to celebrate her apparent victory over the weavers, a great bell began to toll and the castle and its surrounding village was drowned beneath great waves and unrelenting rain. It is said by the people of Culwich that on Winter nights of the new moon when the sky is clear one can still hear bells ringing in the depths of the great lake, and see lights that are said to be those of the drowned Earl and her noble household, still celebrating in the depths.

The Varushkans tell their own stories of the dangers presented by the Semmerlak. While the waters teem with fish, sailors in Karov and souther Karsk say that the water is truly part of Varushka and exacts a dangerous price from any who take its bounty for granted. They speak in whispered terms of Dho'uala, a terrible siren that lures fisherfolk into its cold embrace and drags them beneath the waters - it rarely waits for them to die before it begins to feast. They claim it is a sovereign, and that it must be avoided at all costs.

The Dawnish scoff at these tales, claiming no such horror exists in their lake ... but even they cannot deny that sailors sometimes go missing - experienced sailors, who should know better than to fall for the charms of submarine terrors.

To the east of the Semmerlak lies the Mallum - the lands claimed by the Druj - specifically the territory of Ossium. In the reign of Empress Varkula they attacked across the Semmerlak in a fleet of weirwood rafts. While they were driven back, they did extensive damage to the Dawnish territory before they were defeated. There has been no repeat of that attack - but from time to time opportunistic Druj will raid the shores of the Semmerlak looking to spread chaos and discord.

The Druj are poor sailors, however - their boats are crude and they seem to have little respect for the lake. It is rare to see more than one or two of these raids in a ten-year period.