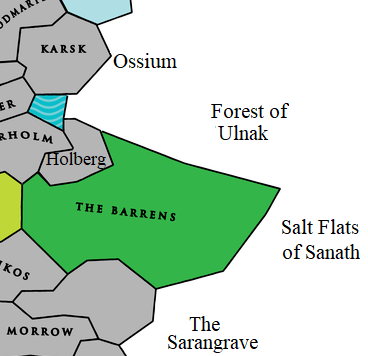 A very rough,speculative map showing the extrapolated locations of the four territories believed to surround the Barrens.

"The Mallum" is the name given to the land claimed by the Druj orcs, east of the Empire. What little reliable information the Empire has about the Mallum has come from the orcs of the Great Forest. There are at least four territories considered to form part of the Mallum, and the Barrens is often considered to represent a fifth.

These are only the lands of the Mallum that the Great Forest Orcs know about. They cannot say with certainty if they represent all the lands of the Druj or not - but they are all the lands that border the Barrens. They also stress that there are more than just Druj living in these lands - the Druj have subject tribes who do most of their menial labour - but warn that the spirit of rebellion has been all but snuffed out. Each of these territories is infused with the same miasma that apparently hangs over Ossium, eroding the will of those who are weak in the face of Druj oppression.

During the Winter Solstice 382YE the Great Forest orcs offered an opportunity to map the Mallum in more detail. The Imperial Senate declined the offer.

The Empire already knows a great deal about the Barrens. The Druj as a nation have always coveted this territory and at various points through history have controlled all, some, or none of it. This sprawling land represents not only great wealth but also allows the Druj to move their armies quickly and efficiently between the various territories they control - and the Imperial territory they covet.

The territory on the far side of the Semmerlak from Dawn is called Ossium. East of Karsk and north of the Barrens and Holberg, it has recently been conquered by the Empire and as of the Winter Solstice 382YE is now a Varushkan territory. Despite the conquest, the presence of Varushkan settlers, and the navarr walking the trods here, large swathes of the territory remain unknown to the Empire. Part of the territory - the northern Bonewood - is under the control of the Thule of Otkodov.

In Autumn 382YE, the Empire invaded Ossium. The armies of Dawn and Varushka took the Druj by surprise, and with the aid of Thule allies, quickly conquered much of the territory. The Empire actually knows more about Ossium than the Great Forest orcs. They know it only as a distant land composed of dark, ancient forests. According to the orcs, the Druj intentionally kept them out of Ossium for some reason.

East of Ossium lies the Forest of Ulnak, another heavily forested region that covers the land at the base of the great mountains that touch the sky. The Druj clans here are less insular than those of Ossium, and according to the Great Forest orcs there is a great and terrible mine cut into the roots of the mountain where thousands of slaves toil ceaselessly to provide stone for the orcs to build fortresses to protect themselves from some threat they fear to the north. The woods here are also rich in weirwood, according to the Great Forest orcs.

When the Druj became aware of their skill at working the precious material many of their elders were forcibly taken to the Forest of Ulnak to work in the weirwood groves. Their information is a little out of date, but according to the orcs there is an immense fortress here at the foot of the mountains with terrible dungeons beneath it said to be the home of a powerful buruk tepel whose mastery of the herbal arts of poison and fear is unparalleled.

The Salt Flats of Sanath

To the east of the Barrens, are the Salt Flats of Sanath. The woodlands in the north give way to broad plains crisscrossed by dark waterways. The ground is damp, and the further east one travels the more water there is. Eventually, one reaches the port of Leen - the Great Forest orcs believe it is the largest settlement in the Mallum, controlled by a powerful clan who also dominate the shifting islands to the east of it. The Grendel are known to visit Leen regularly trading mithril for weirwood.

Finally, south of the Barrens is the Sarangrave. Much of the land here is marshy, or wooded, but the great forest orcs believe it is the most fertile of all the Druj lands. Great plantations worked by slaves and fed by the many rivers and streams provide large amounts of both food and herbs. As with the Forest of Ulnak, they believe the Sarangrave has a great fortress - not quite the match of that in Ulnak but certainly larger than the Towers of Dusk in the Barrens. It was built centuries ago, according to the orcs, and thousands of slaves died bringing the white granite that served as its foundation south across the breadth of the Mallum.

The Great Forest orcs speak of the Sarangrave in dark tones. They say that there is something corrupt in the marsh, a malignant presence that the Druj commune with. Some speculate that it is perhaps related to the terrible spirit that occupies the great ruins that lie along the northern river - the river that feeds into the Feverwater in Therunin.

Further information about these territories could be secured with the aid of a spy network built in each territory.