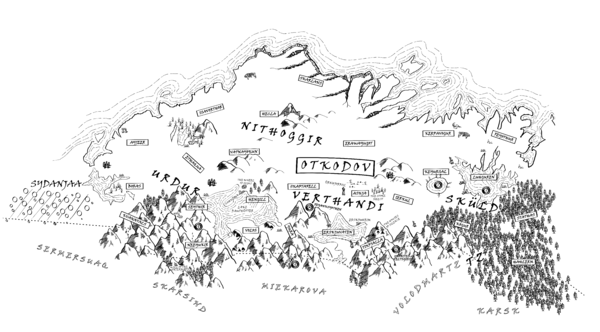 Otkodov is a cold barbarian nation dominated by the Thule. It consists of four territories: Urdur in the south-west, Verthandi in the south, Sküld in the east and Nithoggir in the north.

Much of Otkodov is chilly plains and tundra, with a massive sprawling coniferous forest that covers half of Sküld and a wide range of hills and mountains that covers the southern border with Wintermark and Varushka.

The environment seems more "active" in Otkodov than in the Empire. Naturally occurring bodies of hot or even boiling water are common, as are springs, pools and even lakes whose waters are undrinkable due to concentrations of toxins and minerals from deep underground. . A number of sites are also marked by irregular geysers of boiling water that explode upward without warning. In some places, viscous black tar bubbles to the surface creating a hazard that combines the horror of drowning with the agony of being boiled alive In a few areas, vents in the ground release clouds of choking sulphur or boiling steam. The earth, water and air of Otkodov themselves can be a threat to scouts and spies attempting to avoid more populated areas.

This information was gathered through the use of a spy network constructed by the Imperial Senate in 377YE. Much of Otkodov remains unknown. 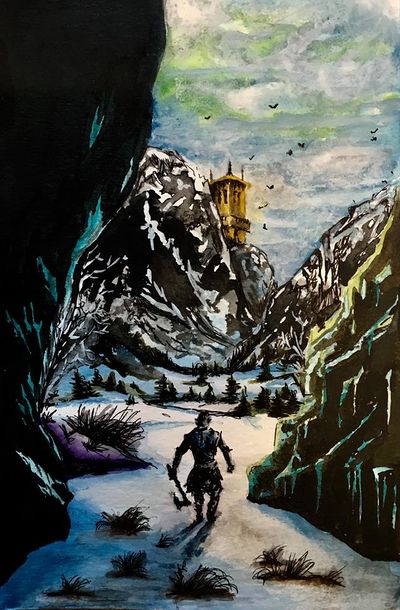 Despite years of peace with the Thule, most of Otkodov is still unknown to the Empire.

Scouts and spies in Otkodov have been able to put together a very basic map of the four territories that compose the northernmost barbarian nation. This information is sketchy at best; more detailed information will require more action by Imperial forces. To date the scouts have compiled information about the major physical features of each territory, and the basic terrain of each region within that territory.

Cold plains, broken by rugged hills and the occasional mountain. As with Urdur, volcanic hot springs are common and in some places plumes of black smoke appear to rise naturally from beneath the ground. The northern coast drops away in great sheer cliffs – there is no easy access to the frigid iceberg-haunted sea. Parts of the coast are marked by great cracks of chasms that reach many miles inland and seem to be where much of the population is centred.

Roughly half of Sküld is dominated by an ancient coniferous forest; a massive fresh-water lake dominates a further quarter of the territory. The territory, along with Verthandi, appears to be where much of the Thule “civillian” population is found. There is a small outpost high in the mountains of Kógur which serves as the Imperial Embassy to the Thule. A repurposed watchpost, it is a drafty and foreboding place and civil servants are forbidden to leave the embassy to travel into Skuld without an escort.

There is a vallorn in Sküld, in the southern forests near Varushka. Little is known about this area in the Empire, but it is believed that the vallorn surrounds the lost Terunael city of Emrys. Recent negotiations between the Navarr and the orcs of Otkodov have allowed the creation of trods connecting the vallorn to the wider network that criss-crosses the Empire but the Thule permit few stridings to visit the area and none are welcome farther north than the edges of the vallorn regions.

Böras, Seythis, Ethaqua, Ayjeer and Volos are cold plains; Kvantal and Neeyukir are rugged and hilly. A great cold lake sits across the border with Verthandi to the east. The territory is sparsely populated, with the barbarians primarily focused around fortified villages with wooden and (in some cases) stone pallisades being the primary defense.

The most populous of the territories of Otkodov, with many settlements huddled around the banks of the large shallow lake in Erskjuvaten. The lake freezes over from late autumn through to mid-spring; it is more often traversed with sleds and skates that with boats. The cold plains are home to a sizable population of mammoths, cultivated by some of the orc tribes here.

The Empire previously maintained a spy network in Verthandi before it was decommissioned by the Senate at the Winter Solstice 381YE.