Any yeofolk who learns magic is formally referred to as a weaver. This old title refers to the time when they would weave magical banners to sell to the noble houses. Many weavers still perform this vital role, but over time the role of the weaver, and in particular the weaver cabal has grown significantly. Weavers now represent the single biggest crack in the Dawn social system - neither noble nor fully yeofolk, they are to some extents outside the hierarchy.

To complicate matters further some nobles have joined the ranks of the weaver cabals. Noble houses can be notoriously competitive, with individuals striving to outdo each other, whereas most cabals are built around skilled ritual teams and have a strong emphasis on cooperation. Learning is shared and everyone is encouraged to grow their skills together. Nobles who see magic as a route to power and glory strive to join a noble house that has a strong team of witches and look to become an enchanter. But they all find they have a lot to learn from the weaver cabals and those who enjoy magic for its own sake sometimes find they enjoy the more relaxed lifestyle they offer.

Mixing nobles and yeofolk can cause tensions - some cabals allow nobles to retain their title and position - others require that everyone in the cabal treat each other as equals. Those nobles who try to move between the two worlds of the noble house and the weaver cabal especially can find it difficult. Those who acquiesce to the egalitarian attitudes of the cabal may well find themselves suffering the disdain of their fellow nobles.

A weaver cabal has some of the qualities of a noble house. Like the noble houses they replace the family unit, adopting children from other cabals and from yeofolk and very rarely from noble houses. Some even set tests of aptitude, checking the skill and magical abilities of those who wish to join. They are not a noble house however, so they cannot set a Test of Mettle, they cannot raise a Dawnish citizen to the rank of nobility. 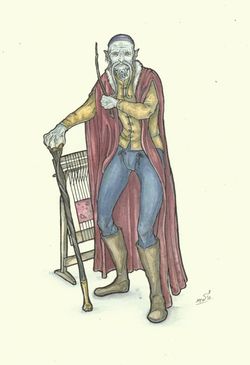 The weaver cabal is intended as the simplest way for a groups of players to create a Dawnish group whose primary focus is performing ritual magic. If you want to play a group of ritual magicians, especially ones that are more interesting in wealth and magical power than in political power and glory than a weaver cabal is a good choice.

The magicians who are members of your cabal - the weavers - will usually be the characters portrayed by the players in the group. Your cabal may include yeofolk who are employed by the cabal work their lands and estates but it is much better to avoid assuming that the cabal includes dozens of weavers who are not played.

Membership of a weaver cabal is usually a much simpler affair than membership of a noble house. There is no requirement for dangerous tests or acts of glory. Some members of your group may wish to play Dawnish nobles who are part of the cabal so they may still have complex background stories, but most members of the group will have been born and raised in it or simply joined as a adult.

You need to pick a territory that your cabal is from, but it is not overly important, so you can choose Weirwater unless you have a good reason to pick somewhere else. Noble houses compete for political power based on their territory, but the cabals are not direct participants in the politics of Dawn so you can choose a territory freely.

It is worth considering how your cabal presents itself to other cabals and to the noble houses of Dawn. The weaver cabals occupy a complex social position, they undermine the basis of the Dawnish noble system but they provide invaluable services which the noble houses cannot do without. If the cabal is too radical and utterly refuses to acknowledge the position of the nobles then you should be locked out of Dawnish society which will likely give you few opportunities to interact and enjoy roleplaying at the event. On the other hand, if you have a powerful ritual team then the noble houses will want your help, so you can afford to demand a degree of respect accordingly.

Most characters in a cabal will be magicians, but there are opportunities for yeofolk, as hired men-at-arms or the spouses of actual weavers. Although most of the character roles presented for yeofolk are suitable for characters who are members of a noble house it is worth considering how a role might be adapted to work with a cabal.

If you are creating a magician, especially a character with an emphasis on ritual magic, then you can choose whether you are playing a noble or a yeofolk. The simple option is to play a yeofolk, the life of a yeofolk is simpler and less tortuous than the life of a noble, so it is the easiest choice. However if you want the additional roleplaying challenge of being a noble, then you should pick. You will need to think about how your character treats other weavers in the cabal - an issue that is worth discussing with your group to ensure that the play style you adopt will be a good fit for the group.

Any characters who are noble should think about what noble house they are formerly part of. Most members of a weaver cabal will have severed any ties with their noble house; they retain their title but have nothing to do with their affairs of their noble family. You can create a minor noble house to fill this role in your background or get in touch with an existing noble house group and see if they are happy to let you play a member of their house. If you want a real challenge you can consider playing a character that is trying to be a part of the weaver cabal whilst remaining an active member of their noble house. To get much play from this option you will also need to be a part of an existing noble house that is played by another group, so it is something to discuss with both groups.

If you are not certain what ritual skills to take then the simplest choice is to spend your skills buying mastery of Summer magic. This is the most common magic in Dawn, and should help your character play a useful role.

Your cabal may have a nominal leader, but there is no common title or particular social role for the head of a weaver cabal. The nature of a weaver cabal is such that most have a fairly egalitarian structure with little need for a clearly identified leader. Most cabals take decisions together, usually by communal agreement of the weavers.