Dawn is home to scores of noble houses which represent the best - and occasionally the worst - of what the nation has to offer. These are not traditional, real world historical, noble families - many of the members are not related to one another by blood. While every noble member of the house bears the house's name - it is the shared experience of the Test of Mettle that truly unites a house.

A noble house is usually led by an earl who has responsibility for setting the house's tests. Some noble houses use traditional, publicly known tests. For example, House Dupon of Astolat traditionally demanded the head of an orc shaman or warlord, taken in battle. Your group may create one or more traditional tests for their noble house if they do not wish to leave this choice entirely to the earl.

The cultural practice of adoption is widespread throughout Dawn - noble houses adopt children from other noble families who are raised as one of their own. Children raised as part of a noble house are usually referred to as noble born, they are expected to attempt the Test of Mettle when they come of age and are given the full support of their house to prepare for that task.

Most noble houses are based around one or more castles, estates or manor houses. They are surrounded by villages and hamlets made up of yeofolk who look to the noble house for leadership and, where necessary, protection. The houses employ large numbers of yeofolk as retainers to work their lands, fight for the houses as men-at-arms and serve in specialized roles such as squires or seneschals. 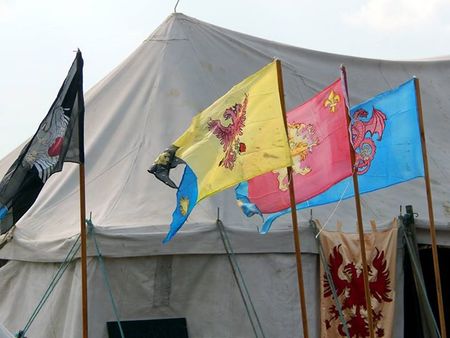 The nobles of House de Gauvain each have their personal heraldry.

The noble house is intended as the simplest way for most groups of players to create a Dawnish group. Dawnish noble houses are in constant pursuit of glory, giving everyone in the house a motivation to get involved.

The noble members of your house will usually be the characters portrayed by the players in the group - you house may include a few off-screen noble members who never attend events, but it is usually better to avoid assuming that the house includes dozens of nobles who are not played. You can assume that there are a large number of yeofolk who help the house to operate and do not attend events, and for whom the noble house is responsible.

Every character is likely to have their own story of how they joined the house, whether they are blood-relatives or fosterlings; newcomers who specifically sought out your house to petition for entry; ennobled yeofolk who won recognition for their glorious deeds; a character from another Nation inspired by the Dawnish way of life to become a noble; a noble from another house who married into the house as the result of a failed Test of Ardour; or some more exotic tale of nobility and glory.

Some noble characters, especially younger characters, might technically be yeofolk who are currently embarking on their Test of Mettle, or are too young to begin one. These characters enjoy the prestige of being part of the house without having the rights - or responsibilities - of a true noble.

You'll want to pick a territory for your house to hail from. If you're having trouble choosing, we recommend picking the territory with the fewest active groups in-game. After all, Dawn has never lost territory to the barbarian forces outside the Empire, and you're going to need to make sure it stays that way.

Each noble house has their own method for selecting their earl, but it is usually a senior member of the family who has already established a glorious reputation. In addition to their formal powers to set tests, the earl is expected to mediate between family members in the case of conflicts. It is rare for an earl to be removed from their position, it is more common for noble houses to split if some of the nobles feel they can no longer accept their earl's authority.

If you are choosing an earl for your group, it is a good idea to pick a player that everyone in the group can get on with and respect. The Empire is not a feudal society and earls have no formal right to the respect of others. But your earl is the embodiment of your noble house - if you want people to respect your noble house then you want them to respect your earl. The best way to achieve that is for everyone in the group to show an appropriate degree of respect for the character. If everyone in your group treats your earl as an important, respected character, then other players will tend to naturally follow suit.

Characters who cannot fight for any reason are a good choice for earl. People should not expect the earl to be leading charges and fighting in tourneys - that is the responsibility of the other nobles of the house, not the earl.

Some houses also have an heir-presumptive - this is another noble character in the house who has been chosen to be earl in the event of the current earl's death. Groups that like to have a great deal of internal politics and roleplay can make this role as political as they want. In groups that prefer a play style where everyone in the group agrees to support each other it is a better idea to have the group choose an heir-presumptive that is a solid ally of the earl, or dispense with this role altogether. Whatever you do, remember that the earl is not an intrinsically hereditary position, so there is no requirement at all to pick one of the earl's offspring as the new earl, if the current earl has been killed. 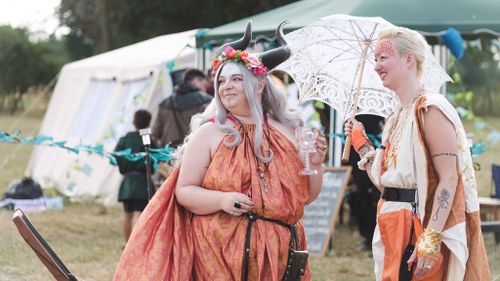 Each noble house has their own method of selecting an earl.

Noble houses can easily include almost any Dawnish character although knights-errant are not formally considered members of the house and questing knights are more usually members of their own knightly order.

Some of the players in your group might want to play a yeofolk. This isn't a requirement - you can represent the house's yeofolk using personal resources - farms and small military units in particular suggest the presence of yeofolk. Most yeofolk characters take subordinate roles to the nobles, but the traditions of service in the Empire mean that even yeofolk should not be taken for granted. Most larger houses have a seneschal, and although this character is a yeofolk, they can be very politically powerful.

Most noble houses will have one or more associated troubadours. These priestly characters help to promote the glorious deeds of the nobles, provide spiritual guidance where it is needed, and may aspire to represent the noble house in the Synod.

Noble magicians are usually called witches in Dawn - they are expected to pursue a life of glory and most are skilled at using magic in battle. Yeofolk magicians are called weavers and are usually skilled at ritual magic. Most noble houses include a few witches and you may wish to create a noble house with a tradition of magical prowess, a house of witches led by a powerful enchanter. If you are interested in playing a ritual group in Dawn, then you should also read about the weaver cabals to see if that interests you more.

Forming a Noble House in Play

Any noble character can form a new noble house in play if they wish. The most common reasons for this to happen is when an existing house becomes too large, or fractures due to internal divisions and several members want to branch out on their own.

Every noble house in dawn has a device that it uses on flags, banners, shields, surcoats ... indeed, practically anywhere it can find a flat surface that will hold some pigment! This device represents your house and should be the focus of much of the pride of the house.

When picking your heraldry, it is probably best to go for something simple and striking. Empire does not have the complex rules of heraldry that exist in the real world, so the simplest way to make a device is to pick a symbol in one striking colour and put it on a background of a contrasting colour. The most common devices in Dawn are mythical beasts - gryphons, lions, unicorns, dragons, wyverns, winged serpents, chimerae and even fantastical beasts that exist only in the imagination - rather than the more mundane beasts favoured by the rival Marches. Many of these beasts have commonly understood qualities which serve as the basis for heraldic magic; a Dawnish house will often use a beast that exemplifies one or more of the traits that their members aspire to.

It helps to pick your heraldry with an eye to your costume (or vice versa). Arranging for your nobles and yeofolk to wear colours that match their device will create a dramatic impact on the field, and can be done relatively easily through the use of surcoats and cloaks.

A short list of prominent noble houses in Dawn can be found on the Dawn groups page.