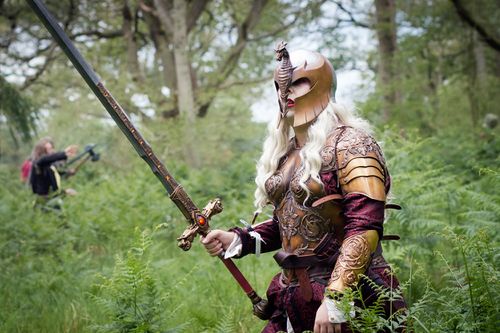 Questing knights are romantic figures in Dawn, knights-errant who continue to pursue an adventurous lifestyle after passing their Test of Mettle, seeking greater glory for themselves and their houses. They travel far and wide across Dawn - a quest isn't just a monster to kill or a people to free from barbarian tyranny, after all, but a long and arduous journey to get there first.

Questing knights strive to embody the high ideals not just of Dawn, but of the quest. If they come to a place where there is a wicked magistrate abusing their power, or a monster snatching children away, or an innocent young fellow about to be forced into a marriage he doesn't want, then it is their right and duty to right the wrong. Questing knights who ignore evil or danger that they meet along the way are no better than mercenaries paid coin for their work. Most questing knights prefer to travel in the company of a troubadour, who can document their triumphs.

If you want to play a noble character who focuses on achieving glory and avoids the politics of playing in a noble house then you should consider playing a questing knight. You should decide what noble house your character is part of - questing knights have already passed their Test of Mettle. If you know a group who are playing an existing noble house then you can ask them but you can play a knight who is part of an obscure minor house that is simply part of your own background.

Although the word knight is usually used to describe a warrior, a questing knight can be any noble character - you might be a warrior but you could just as easily be a witch, a troubadour or a craftsman.

A Questing Knight strives to embody the high ideals not only of Dawn,
but of the quest itself.

If you intend to play a questing knight, it is important to appreciate the large scale of the PD Empire events. You will have epic opportunities for battles as part of a great army fighting the orcs, but you won't be going off on a lone quest to slay a monster. It isn't possible to create that kind of experience for characters at an event where hundreds of players are attending.

A knightly order is an order of questing knights, nobles who have completed their Test of Mettle but elected to continue questing together. A knightly order is similar to a noble house, but is less political and more focused on achieving glory. You will need a name for your order and should think about creating a heraldic symbol that reflects the name.

If you are creating a knightly order, then you can make it as complex and demanding as you choose. Your order may demand complex rules of behaviour or have a religious element, their members strive to uphold Pride or one of the other virtues. It may have a grand quest - something impossible for an individual to achieve - such as conquering a new territory for Dawn or destroying a hated eternal. The more detail you give your knightly order the more interesting it becomes.

Your group can include all kinds of nobles, but it is useful to have a troubadour who can immortalise the order's glorious triumphs. If you have members of the group who want to play yeomen then all the advice for a knights-errant group is also applicable for a knightly order.

You can't start play with an eternal as a patron, but you can try to acquire one in play. An eternal patron helps to add to your order's reputation and romantic mystique but they may also be able to provide you with glorious challenges and quests.