The hero may be afraid, but they master that fear. Death comes for everyone eventually; the hero dies well so that their story lives on.

The Steinr are one of the three traditions of Wintermark. According to the scops, they fell from the sky in a shower of falling stars and have meteoric iron in their blood. Regardless of the truth of this claim, they seemingly appeared from nowhere and joined the Suaq and the Kallavesi to defeat the trolls and claim the rich territory of Hahnmark as their homeland.

The stereotypical Steinr is bluff, bold, and forthright. They wear rich fabrics and adorn themselves with fine armour and jewellery, priding themselves on their prosperity and courage. They attack life with gusto, throwing themselves into whatever it is they are doing whether it be composing a poem, forging a sword, or defending the borders of the Empire. They are the first to speak up, and the last to retreat.

The Winterfolk admire heroism and believe that it speeds your passage through the Labyrinth of Ages. When an Imperial citizen thinks of a Wintermark hero, they often think of the bold Steinr, armed and armoured, making war on the savage orcs to the north and west of their nation. Steinr warriors try to be fearless in battle - seeking a chance to test their skills and their heroism against their enemies. Strong warriors like Inga Tarn and Emperor Guntherm exemplify this archetype, but they represent only a part of what heroism means to the Steinr. 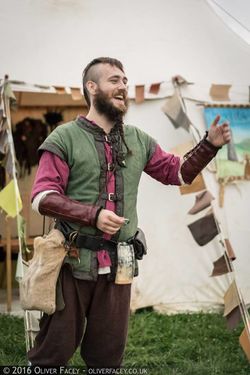 At heart, the Steinr are perfectionists, driven to test their skills to the limit, whether as warriors, artisans, or scops. They are skilled artisans and crafters who treasure beautifully made items. It was a Steinr, the smith Isenbrad, who invented the runes that are used by artisans across the Empire to this day, and the act of imbuing mundane items with a spark of power and magic is a proud tradition among these people.

The Steinr delight in art and beauty. They are skilled poets, storytellers, and musicians who delight in recitals and performance of all kind. They are adept at weaving their performance to kindle emotions in their listeners - whether it is to build courage and rage before a battle, to bring a congregation to tears during the funeral of a dead hero, or to end a ruinous conflict as in the tale of the famed scop Theodric Mooting. Likewise, they are passionate priests who seek to inspire everyone to stay true to the Way of Virtue no matter how dangerous the path becomes.

More Thanes are drawn from the Steinr tradition than either Suaq or Kallavesi. Their people trust them to listen to advice, but to take bold action when circumstances demand it. As politicians and senators, Steinr express the virtues of forthright directness and honesty - they put their cards on the table and inspire their peers from the other nations to do the same.

The iconic Steinr hero strives to embrace all these traits. It is not easy to achieve such accomplishments but striving is more important than success. The Steinr vision of themselves is of a people driven to pursue the heroic ideal regardless of the risk, to overcome any obstacle regardless of the price, and to become the greatest regardless of the cost. 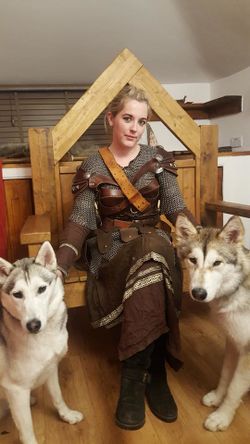 The Steinr who embrace the Way often find that some of the virtues resonate with their tradition more strongly than others. It is easy to see why the Steinr value Courage; they are forthright, open, direct, and follow their hearts in all things. Courage complements this, helping them to find their strength on and off the battlefield. May Steinr are also Ambitious; the drive to gain a name, to achieve great deeds worthy of song and story, comes from ambition.

The Steinr have a love of rich beautiful things but they see this as exemplifying Pride rather than Prosperity. Of course doing deeds one can be proud of is a cornerstone of heroism; but they also show their pride through their fine clothes and jewellery and through the hospitality they offer to strangers. To the Steinr what is important is the Pride that these visual symbols of wealth engenders, rather than the hard work needed to attain them.

Finally, the Steinr favour a particular form of Wisdom. The wise, they believe, listen to the advice and counsel of others to find the right decision, to allow them to act in accordance with what they know to be right. The Hallowing of the Stormcrow is particularly valuable to Steinr thanes. The wise Steinr acts boldly and with confidence but they are not rash - they weighed the advice and the evidence first to ensure they have considered it fully.