The value of a life is weighed in the choices that have been made - and those that have not been made. 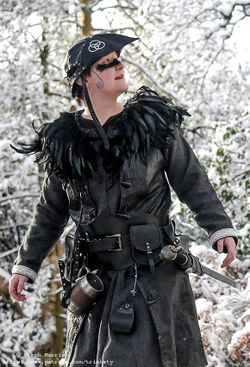 The Kallavesi are one of the three traditions of Wintermark. According to the scops, they were born from the feathers of a flock of crows scattered on the marshes of Kallavesa. Regardless of the truth of this claim, they and their Suaq cousins have lived in the north-west since before written records, perhaps predating even the Terunael empire. They joined with the Suaq and the Steinr to defeat the trolls, and continue to claim the fog-shrouded marsh territory of Kallavesa as their ancestral home.

The stereotypical Kallavesi is mystic, peculiar, and wise. They wear homespun wool, fur, and leather clothing and love to decorate themselves with feathers and semi-precious stones. Their colours are the colours of the marsh - earthen greys and browns, smoke-grey, moss green, and the occasional bright flash of colour. Bedecked with totems and fetishes whose meaning is often deeply personal, they often cover their heads and hide their faces with peculiar masks evoking the power of a favoured animal spirit. They are always watching, considering, weighing, dreaming. They are the last to speak, but their words echo with insight and wisdom.

The Winterfolk admire heroism and believe that it speeds a spirit's passage through the Labyrinth of Ages. When people remember the legendary figures of Wintermark history they often think of the of the otherworldly Kallevesi, bedecked in feathers, dispensing vital wisdom to those they guide. The Kallevsi believe that heroism comes from the exploration of the skein - from the choices a person makes as they travel through life. Once is a decision is made, one cannot go back and make the choice again, one can only move forward to the next choice. The iconic Kallavesi hero is Tekupala, the Kallevsei shaman that guided Empress Mariika to greatness. 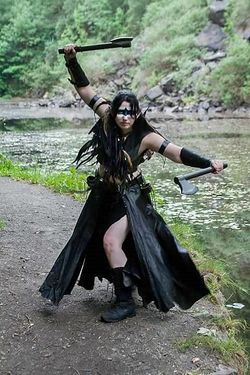 A hero has a name.

The Kallavesi live in dreams. Dreams are the gateway to understanding that reveal truths about the world of which the waking mind is ignorant. They trust their intuition, and listen to their instincts. They are masters of divination, seeking truths that are yet to come to pass or hidden in the past. They do not rely solely on magic, which is just one tool among many. They make use of common tools, casting runestones or drawing cards to unlock their inner eyes to see what is hidden to others. The wisest among them are masters of herbal arts that awaken the mind and allow it to see - the Infusions of Feathers are based on recipes that have been used by the Kallavesi for centuries.

More than any other, this tradition looks to the future. Of all the three people they are the ones most interested in shaping their destiny and the destiny of others. They plan for the long term, seeking meaning from the past and the present to help them to see the wider picture. They are strategists, diplomats, and counsellors - identifying the threads that will fork the skein for weal or woe for a person - or a nation.

They are wise, but they are also passionate. They may take their time deciding on a course of action, but when they have made up their minds they commit themselves to act without reservation. The archetypal Kallavesi warrior may meditate before entering a battle, but once the fight begins they throw themselves into the fray wrapped only in the skin of a bear or wolf, committing themselves fully to the fight. There can be no half-measures for the warrior in battle - but for the Kallevesi hero there are no half-measures in anything - once the path is chosen they do not look back.

More stormcrows and mystics are drawn from the Kallevesi tradition than either Suaq or Steinr. Wintermarkers do not always follow the advice that such heroes given them - but they know that it is always worth listening to. As guides, both spiritual and practical, Kallevesi drive those who hear them to confront new ideas and consider new perspectives on how they can solve their problems. The best are able to inspire their peers from the other nations to do the same.

It is rare for an individual to personify all these traits, but striving is more important than success. The Kallavesi vision of themselves is of a far-sighted people for whom heroism is born in equal parts of wisdom and passion. They value the wisdom that comes from within, but they also value decisive action that twists the skein towards newer, better paths. 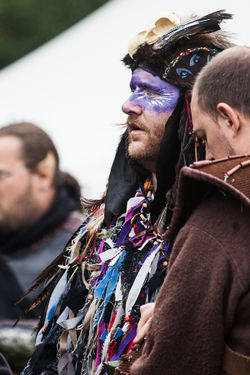 A hero's tale ends with a good death.

The Kallevesi are a deeply religious people, believing fundamentally in the power of faith and the spirit. While most of them embrace the Way, they are often at odds with more orthodox priests. The virtues provide power, it is true, but they are not the only spiritual forces that the Kallavesi honour. There have been repeated accusations that in private the Kallavesi talk about the inspirational power of the ancestors of the Winterfolk, more than they do the recognised paragons and exemplars. They are said to commune with the spirits of the dead in a manner more suited to orcs than Imperial citizens, and to make use of dream quests, trance-like meditation, and drugged inspiration to receive inspirations that have little to do with the doctrine of the faithful.

Wisdom is the pre-eminent virtue of the Kallavesi, and many dedicate their lives to seeking it. Unlike some Imperial citizens, they are more likely to look for wisdom internally through meditation than externally in books or the counsel of others. They also seek to share their wisdom and understanding - Tekupala, who served as an advisor to Empress Mariika (and, if stories are believed, a great many other Wintermark heroes through the centuries), is an inspiration to many Kallavesi people.

The Kallavesi are also Vigilant, keeping their eyes peeled for threats to themselves and their people. The Kallavesi urge the vigilant to listen to their instincts, and heed their intuition - if one has a bad feeling or a nightmare about someone or something, they often argue, it is a sign that there is something to be worried about.

Courage is greatly valued among the Kallavesi. They believe that once a decision is made you should commit yourself utterly to that path and hold nothing back. It may take them time to decide what needs to be done, but once that decision is made they strive to act with the irresistible force of an avalanche. The skein teaches that once a choice has been made, it cannot be unmade, and must make the best of it.

Loyalty is especially prized by many Kallevesi - especially those who take up roles as counsellors or guides. They understand that true heroism requires many sacrifices - a hall can only have one thane, but they must be supported by many if they are to rule wisely and well. The Kallevesi welcome the chance to work through others, content to put aside the glory of leading for a chance to guide a great leader's skein.

Regardless of their calling, the followers of this tradition have a preoccupation with spiritual matters. The magical practices of the mystics are well known, but are only one example of the way the Kallavesi weave mysticism into every walk of life. Warriors, thanes, diplomats, artisans, and scops alike draw on the deep well of Kallavesi esoteric understanding to guide their path.

The Wintermark customs surrounding birds and feathers are well known, but they are even more pronounced with the Kallavesi. According to mystic lore, a bird’s wisdom is contained in its feathers. Kallavesi often make a point of collecting and wearing any feathers they find, seeking to gain mystical insight by absorbing the discarded thoughts of the bird that shed them.

Like their Suaq cousins, some Kallavesi warriors choose certain beasts as personal totems, often wearing a beast skull or leather and bone mask as a helmet. The meaning a beast has may be quite subjective drawing on personal symbolism and idealised imagery. One Kallavesi warrior might wear a wolf helmet to draw on the fierce Loyalty of the wolf pack, while another might favour a wolf-skin cloak as a reminder of the bold ferocity the wolf shows against threats.

A few Kallavesi also keep the traditions of ancestor reverence alive among the Winterfolk. Before the Way, the three peoples honoured their ancestors as exemplars of heroism and the right way to live. Since joining the Empire, some Kallavesi have continued to quietly teach the stories of honoured ancestors with the same weight as the stories of exemplars and paragons. There has always been a great deal of interest in having these ancestors recognised as paragons and exemplars by the Imperial Synod.