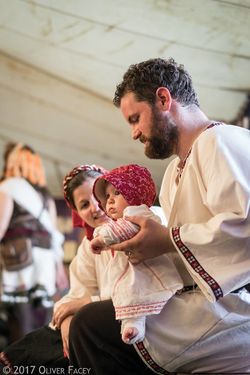 Festivals and feasts are a common feature of Varushkan life; among the most widespread observations are the Feast of the Loom and the Winter Market.

In the remote and isolated vales of Varushka, superstitions and traditions that date from the earliest days of the Imperial Faith -and perhaps before - persist in hearth magics and festivals. One such tradition is the Feast of the Loom, a winter celebration that traditionally begins at dusk on the first night of the Winter Solstice, when Varushkans gather around the hearth to share food, drink, songs and stories (in particular, this song ). Any Stzena present often begin the proceedings by performing, though their role throughout the night is more to encourage the participation of others than to provide continual entertainment themselves.

The Loom after which the festival is named comes from one of the traditional tales told at this festival. Many vales have their own version, which tells of three sisters whose children wander too far from their house and lose themselves in the woods. One sister tries to draw them back by lighting fires on the edge of the forest, one makes noise with bells, rattles and signing, but only when the third sister brings her loom, and weaves the children's names into cloth with scraps of their clothes and hair do the children remember their families and return home. Taken literally it is told as a children's story to warn against the dangers of straying into the dark forests; allegorically the children are thought to represent to lost souls in the Labyrinth. At this time of year, some Varushkans still cling to the primitive superstition that the labyrinth is passing closest to the mortal realm and that songs and tales told of the departed will be heard by the souls of the Virtuous dead, and hasten their rebirth. It is traditional in some vales for a simple loom to be hung near the Hearth, where are all welcome to weave scraps of ribbon, cloth or hair into a rug or blanket over the course of the Festival. 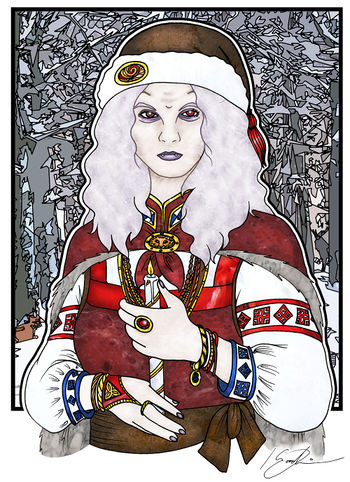 No season in Varushkha can be said to be easy, but for the unprepared, Winter especially can prove fatal. When the air cools and the blizzards begin in the northern territories, it is only a matter of time before the roads become impassible, adding the perils of avalanches, deep crevasses and freezing temperatures to the ever-present fear of Wolves. Travel becomes difficult, and trade near impossible. For that reason, many Varushkans make an annual Autumn journey to the largest settlement nearby, to stock up on all that they need to see them through the Winter months.

Many vales hold a formal Winter Market, and take the opportunity to celebrate with their neighbours before returning to their homes to wait out the season. Traditionally shopping for food, furs, and textiles is done during the afternoon, with entertainment and sweets provided for children and hot spiced wine for adults. One tradition involves giving older children a pouch of money and a shopping list, and telling them they have exactly the right amount of coin for the goods they are to buy. Children quickly learn that the harder they bargain and the more carefully they shop, the more coin they have to spend on themselves, learning valuable skills in the process.

When dusk comes the market usually pauses while the area is warded against the night. Once that is done the children are usually tucked up in bed, and the Shadow Market begins. Some stalls - often those selling hot wine and food - remain open - others close, allowing their owners to devote themselves to revelry. Music and fire breathing are popular entertainments; puppeteers and storytellers change their daytime repertoire to suit darker and more adult tastes. In some vales the celebration lasts long into the night, the guests knowing that this may be their last chance for some months - or perhaps, forever.

A funeral is almost always a sombre occasion in Varushka. The majority of funerals take place during the day, and are restrained affairs marked by eulogies spoken by the closest friends and families of the dead and a blessing from a priest. The body is then buried in a graveyard or corpse garden, wrapped in a shroud traditionally sewn together out of the sheets and blankets from the last bed they slept in before death. Graves are usually dug by the closest relatives of the deceased, rather than by any kind of professional.