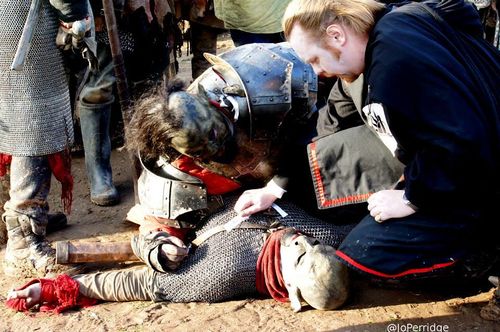 Exorcism is believed to be one of the oldest ceremonies practiced by humans, and elements of its performance pre-date both the Empire and the Way. Exorcism can be used to drive off any unwanted spiritual presence, such as a possessing spirit, ghost, or similar entity. Most spirits will attempt to resist being exorcised so a successful ceremony often requires a team of priests working together - and a significant amount of liao. In all cases, the ceremony must be performed in the presence of the target.

Opinion is somewhat divided on what exorcising a ghost means. Most priests believe that the spirit is returned to the Labyrinth and re-enters the cycle of reincarnation. However, many dedicated exorcists and stewards of the dead view the ceremony as a weapon of last resort when dealing with spirits that are not directly threatening innocent people. These priests claim that when a spirit is exorcised without first addressing its reasons for remaining in or returning to the world, those reasons may impede its progress through the Labyrinth.

Not all spirits are equally vulnerable to exorcism. Some are able to create a special spiritual link to objects or (more rarely) people and places that are usually called anchors. A ghost with an anchor may be driven away for a time, but usually "reforms" near one of its anchors. Only if these anchors are themselves exorcised can the ghost finally be "laid to rest" by an exorcist.

Some spirits are capable of forming (or co-opting) a body to allow them to physically interact with the mortal world. In these cases, it is usually necessary to incapacitate the creature before performing the exorcism so that it cannot fight back or flee. Similar problems may occur with a possession, depending how powerful the possessing spirit is.

Performing an exorcism uses a dose of liao. Performing the ceremony requires at least ten seconds of appropriate roleplaying and the target must be close enough to touch throughout.

You must have a referee to perform an exorcism on an object. The referee will take your liao, and inform you if the effect has been successful.

You will not normally need a referee present to perform an exorcism on a spirit or a character that is possessed by a spirit - in this case you should call "Exorcism Rank X" where X is the rank of the exorcism you have achieved. The player playing the spirit or its host will have have been briefed how to react if they are targeted by an exorcism, otherwise there is no effect.

Exorcism will banish an unwanted spirit, driving it off. It is unknown if exorcism destroys the spirit or merely returns it to the Labyrinth.

Many spirits are difficult to banish using exorcism. They have a strength that reflects their innate resistance to being driven off. You can only banish a spirit if the rank of the exorcism is equal or greater than the strength of the spirit. The minimum strength needed to banish a spirit can usually be determined using the insight ceremony. An insufficiently strong exorcism will still consume the liao used to perform the ceremony.

Some spirits possess anchors, one or more physical objects which tie them to the mortal world. In this case, the spirit will slowly reform at the nearest anchor if it is destroyed. Most anchors are objects associated with the spirit in life. Exorcism can also be used to remove the presence of a spirit from an anchor, rendering it useless. Insight can confirm whether an item is an anchor and what rank of exorcism would be needed to banish the spirit from the item.

You can use true liao in place of normal liao to perform an exorcism ceremony. In this case, the exorcism is automatically powerful enough to banish any spirit, possession, or haunting presence, even when wielded by a single priest.

Theory suggests that a ghost with anchors that is subjected to a true liao exorcism will find it extremely difficult to reform, and is likely to be greatly weakened, but there has been little opportunity for experimentation to prove this one way or another.