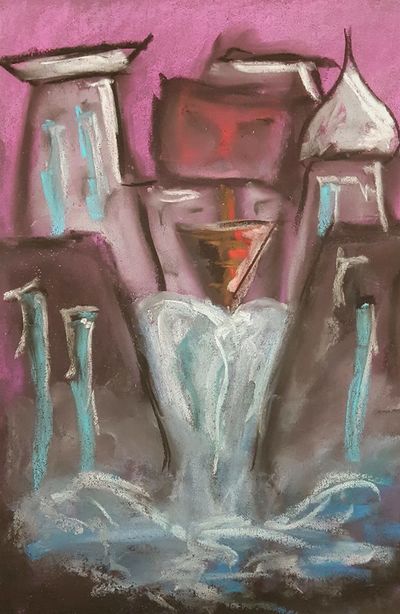 Locks depicts a city of complex interconnecting intrigues and schemes.

Known as the Sovereign Lord of Locks, Basileus Flint is the master of intrigue, espionage and brutal power plays.

While he sometimes appears in female or monstrous guise, Basileus Flint is generally referred to with masculine pronouns, He is sometimes known as the Patron of Spies and Traitors due to his role in keeping people's secrets. Flint is dubbed Prince of the Black Vaults, in recognition of the role that espionage and military defence play in his realm - and of the oubliettes to which those who fail or displease him are consigned.

He is also known as the Keeper of the Weir, due to his interest in fleets and sea trade and to the great canals that run like a web through his eternal city. A mistake over the nature of eternal politics had him known as Nightbane due to the belief that his role in keeping secrets secure put him in direct opposition to the eternals of Night and Sadogua in particular; more correctly he has a great deal of interest in extending his influence to include the eternals of other Realms, especially those of the Whisper Gallery. Several sources also refer to him as Basileus Kade, and reference a confused story that Flint is not the first Eternal to rule the City of Locks.

Basileus Flint has two distinct forms, and swaps between them as he wishes. Most commonly he appears to be a lithe young man dressed in the well-tailored clothes of a professional of some kind. He can also appear as the Beast of the Locks; a monstrous horned creature reserved for the darkest of Flint's moods. He often wears the tattered remains of a fine suit of clothing, and while he rarely carries a weapon in his other guises, as the Beast he may wield a brutal double-edged gladius and a main gauche. When he is encountered in this form Flint is at his most dangerous. All pretence of civilisation is abandoned, and he appears entirely consumed with the ruthless application of power to achieve one's goals. All the scholars agree - deal with the Beast of Locks extremely carefully. The Sovereign Lord of the City of Locks was once known to take the form of a beautiful woman as well, but this guise has not been seen since the ascension of Basileus Flint. 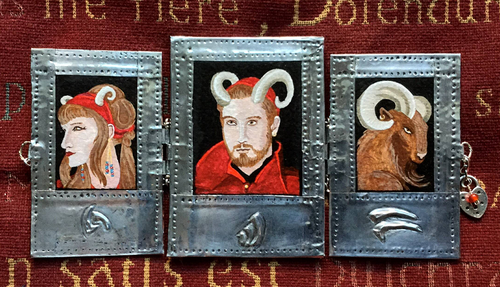 Triptych believed to show servitors of Basileus Flint, intended for use in ritual magic.

It is not common for an Autumn eternal to change shape so freely, and scholars of the eternals theorize that he has access to an item of power, possibly a mask or the belt of locks he wears at all times - a tool that helps to keep those he deals with uncertain and off-balance.

Regardless of form, he wears discreet yet obviously valuable jewelery to reinforce his appearance as a man of station. Regardless of his attire, he always wears a belt with a lock and set of chains chains worn over the buckle. However else he appears, Flint is always wealthy, powerful and in control.

Flint never appears alone. He may remain aloof, allowing his heralds to do the talking for him (especially when he is in the guise of the Beast of the Locks). Other times he plays the gracious host, entertaining his guests with conversation and fine food - but a guest should never forget that this creature is a being of intrigue and power, and that very little he says or does should be taken at face value. 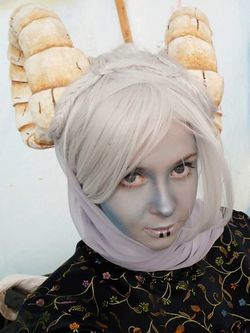 Carolinus Flint, an inhabitant of the City of Locks.

Ultimately, Flint is manifestation of raw, naked ambition and control. He is a power-monger, a figure who decides who will prosper and who will be ruined within his domain. Everything has a place within his grand scheme, and the world is divided into those who support him, and those who are yet to support him.

In his own realm, Flint is concerned with the never ending politics of the charter houses of the City of Locks. These brutal displays of dog-eat-dog politics are continuous and never ending, as the citizens constantly vie for the blessing of their Lord Sovereign. These concerns inevitably spill over into the temporal realm and into the Empire. Flint encourages the charter houses to look for sources of power and influence outside of the Realm of Autumn to give them an advantage in their constant competition against each other.

Flint is always reaching outwards, looking to extend his influence from his centre of power to envelop and encompass everything else. In this regard, he embodies the idea of trade as a tool of control, and many of his heralds function as both traders and spies; gathering intelligence that can be used to extend the power of both Flint and the City of Locks.

While the enmity between Flint and the Night eternal Sadogua is a myth, the Lord of Locks has spent an eternity attempting to master and harness the eternals of the Whisper Gallery. Unfortunately, the Sovereign Lord of the City of Locks seems to believe that every action taken to achieve this goal increases the chances of Basileus' own secrets being used against him by the Whisper Gallery. He has engaged in convoluted schemes to bring them under his control, but dearly wishes to know precisely what they know about him. This goal is further hampered by the various problems that trying to exert influence over the eternals of another Realm present to the Autumnal lord; not least the fact that while he understands the power of secrets to blackmail and influence others, he cannot really comprehend the more mystical and philosophical concepts in the way the Night eternals do. For their part, the Night eternals pretend to neither know nor care about Basileus Flint, and this drives him to distraction - he cannot fathom their wider plans, and until he can understand them he cannot influence them. 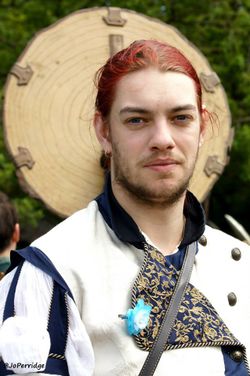 Flint, before his alleged ascension.

The Sovereign Lord of the City of Locks gathers secrets; not mystical secrets like the eternals of Night, but the secrets gathered by spies and agents who watch and record what the people around them are doing. He spreads his influence by influencing those who seek influence and control over those around them - anyone could become a node in his web of power and control. He helps those who want to protect their investments, build on the assets and alliances and increase their share of whatever market they are competing in - all the time ensuring that he increases his own share of that market through the person he is aiding. Magicians prepared to make a strong deal, and willing to accept the risks of a continuously changing foreign and possibly alien market can get access to the incredible resources and assets in the halls and vaults of the City of Locks.

Flint encourages his heralds to make deals with magicians, and those who are clever enough can reap great rewards; but they must be careful not be crushed by the rapidly changing politics of the city. This is especially true when you consider that the magician will not be able to directly get involved in the management of any assets they gain in the city and will have to trust that the Charter House will protect their interests. The most common way of achieving this goal is to have plenty of resources to draw on in the Empire to be used as capital, and to ensure that any agreements are carefully worded. The representatives of the Charter Houses will never break the word of a contract, but they have no regard for the 'spirit' of an agreement - only the actual words on the paper.

Those dealing with Flint should take care to remember that trade is not his primary goal; it is a means to increasing his power and control over the world. While some Autumn eternals engage in trade for the love of the deal and its subtleties, ultimately Flint is concerned only with power over others. Playing the game with the Sovereign Lord of Locks is not for the faint hearted, and although the rewards are great, the possibility of the Lictors - or worse - collecting on debts owed cannot be ignored.

The Truth About Basileus Flint
For most of the Empire's history, the City of Locks was ruled by Basileus Kade. During the Autumn Equinox 379YE, following a significant period of turmoil in the City of Locks, Basileus Kade was supplanted by a citizen of the League city of Tassato. The details of precisely how Flint was able to claim this position are known only to those directly involved. What the political, religious (and legal) implications of this ascension, assuming it is even real, are extremely unclear.
Retrieved from "https://www.profounddecisions.co.uk/mediawiki-public/index.php?title=Basileus_Flint&oldid=70961"