The Brass Coast lineage and species attitudes (Redirected from 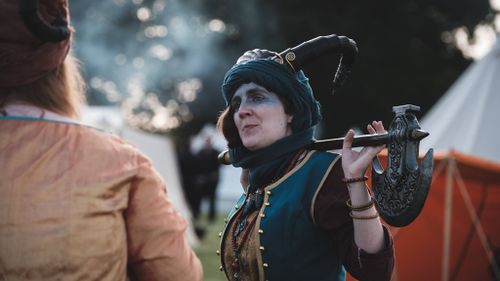 Cambion have a special place in Freeborn society.

Perhaps unsurprisingly, the Freeborn have a relaxed attitude to those with lineage, with two notable exceptions.

Cambions have a special place in Freeborn society, a tradition that dates back to the murky prehistory of the Freeborn. According to legend, a particularly clever cambion (whose origin is usually tied to the teller in some way) convinced the founders to sign a cleverly worded trade agreement. This binding oath is allegedly what has kept the Freeborn together as a people. This story has created a superstition that the blood of a cambion (usually a thumbprint) upon a document of trade will bring good fortune to the signatories. As a result, Freeborn cambion often study to become scriveners.

The calm nature of the merrow is at odds with the fiery Freeborn way of life. Merrow rarely find themselves comfortable in Freeborn society and there are few to be found. Many Freeborn parents of a merrow child will take that child to a spire in Urizen, where the child will find a better life - indeed such a stipulation is often explicit in the parts of a marriage contract dealing with children. There is no shame in this; the Freeborn recognise that a merrow will struggle to find a life in the tribes and encourage the parents to make a decision that is seen as being in the best interests of the child. The parting song Without You is traditionally associated with this custom.

The Freeborn Emperor Ahraz i Contero i Guerra freed the orc slaves and was instrumental in bringing them into the Empire. As a people, the Freeborn have a great deal of time for the Imperial Orcs, encouraging them to make a place for themselves. On the whole, the Freeborn prefer to deal with people honestly - whatever they may look like - and consequently they are amongst the folk most likely to treat a non-human individual as an equal.