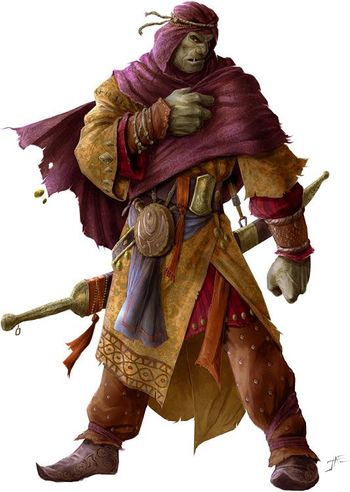 The Grendel prize discipline and order in battle. Most Grendel who take the field are professional soldiers, career professionals who are well trained and well paid, they expect to be given orders and to follow them closely. The ideal of fidelity is drummed into Grendel soldiers - that martial strength is accomplished by working together, by showing loyalty to those you serve, those you fight alongside and those who fight for you.

Most Grendel prefer to remain onboard their ships, but elite units of soldiers will fight on land, alongside the much more numerous barbarian forces of the Broken Shore who make up the bulk of the Grendel armies. Where possible we will try to field Grendel warriors together, especially if they have similar costume, and then inter-space the line with bands of regular barbarians.

As with any barbarian role, PD will provide simple costume that you can use when monstering the Grendel. The following page provide an overview of how you can improve upon the basic barbarian breastplate and soft kit available.

The Grendel enjoy bright colours, especially purple. Purple dyes were once rare in the Broken Shore and only the wealthiest Grendel could afford them. In modern times they have become common-place as a result of trade, but they remain prized for their historical association with wealth and power. Red is also popular, though the preferred shade is a bright rich colour, rather than the dark blood red of the Jotun. Bright splashes of white, yellow, or orange are common as highlights and in accessories. 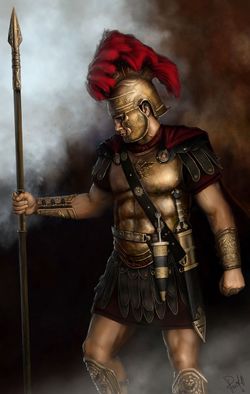 The basic Grendel costume is a white shirt worn over a pair of cotton or calico trousers (baggy or straight). These are worn by all Grendel, with wealthier Grendel having decorated or bejewelled garments fitting to their status. In the colder climes of the Empire, the Grendel will usually wear robes or a long coat that covers the shirt and falls down over the trousers. Cloaks are common in all weather though they are usually shorter garments hung from shoulder clips, rather than full cloaks that hang from the shoulders themselves.

In practice any bright coloured base garments are better than nothing as a starting point if you are volunteering to play a Grendel. 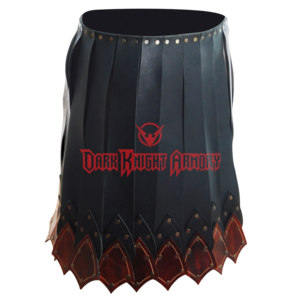 Grendel warriors who are used to fighting on ships avoid mail or heavy metal armour, considering the risks to great. Instead they use lighter materials than steel, such as mithril, leather, or even cotton. Their armour shows considerable Asavean influence. Some units will wear a thick cotton linothorax, while soldiers in other units opt for ornate cuirass made of mithril or cured leather.

Warskirts are ideal, but where most barbarian orcs will fashion a war skirt from rough scraps of leather, the Grendel favour a carefully cut war-skirt of thick leather straps, with ornamentation and decoration where possible.

There is no single favoured Grendel weapon; units armed with spear and shield are common, but swords of all kind are popular, with exotic curved blades, especially prized by the wealthiest Grendel commanders. Grendel rarely go into battle with a single weapon, most carry a backup weapon and those units that avoid the weight of a shield will usually carry a second blade instead and fight with both.

When it comes to ranged combat the Grendel heavily favour crossbows, especially when they can field them behind fortifications such as a fort or the forecastle of a ship. Where this is not possible, bow users will normally deploy in mixed units, protected by soldiers with shields at the front. Javelins and other thrown weapons are widely employed, but are regarded as distinctly inferior to crossbows. 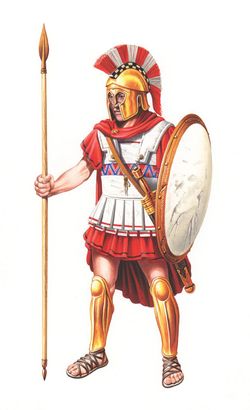 All Grendel prefer to enter battle with a shield where possible, to provide protection from enemy archers. The perfect shield is a large round domed shield, like the classical Greek Hoplite shield. Units capable of forming interlocking shield walls as part of an effective deployment are amongst the best paid of any Grendel soldiers.

Purple is often seen on Grendel war banners war or incorporated into their costume as an under-tunic. Even a small amount of purple can make a big impact: a tabard or sash, scarf (to hide your human neck!), material belt or strips of cloth used as arm wraps or decoration on armour.

Grendel accessories include all manner of jewellry, especially necklaces and bracelets. Anything that expresses the wealth of the Grendel soldier is great. In particular their armour often includes ornamental tassels that hang down over the shoulders or sometimes the waist.

In addition to the Grendel, there are six major tribes that inhabit the Broken Shores - the Salt Dogs, the Stone Gyre, the Iron Gulls , the Black Eels, the Brine Turtles, and the Sand Turtles. These large tribes live in the interior of the Broken Shores alongside numerous minor clans. The Grendel raise their armies from the tribes of the Broken Shores, the subject tribes are effectively mercenary armies in the pay of the Grendel.

Grendel forces will usually have Grendel soldiers commanding them but the warriors of the subject tribes form the backbone of every Grendel army. As such half or more of the forces encountered on battles and skirmishes will usually be orcs from one of the six Broken Shore tribes. These orcs ideally wear a plain breastplate over a simple cut dark tunic and/or a warskirt. As the tribes include a large number of smaller clans, any costume that is suitable for a barbarian orc is useful when playing one of the foot-soldiers of the Broken Shores.

Everyone who is volunteering to monster should turn-up wearing base costume and carrying at least one weapon, preferably a one-handed sword, if remotely possible. However if you are able to bring costume, weapons, and armour that are suitable for Grendel roles when monstering for a Grendel fight, then this is an enormous help in making the battle look as good as possible. In particular, we will try to assign volunteers to groups based on the kit they bring with them; players who have good Grendel kit will be assigned the more interesting Grendel roles, those without will be assigned to play barbarian orcs from one of the Grendel subject tribes. 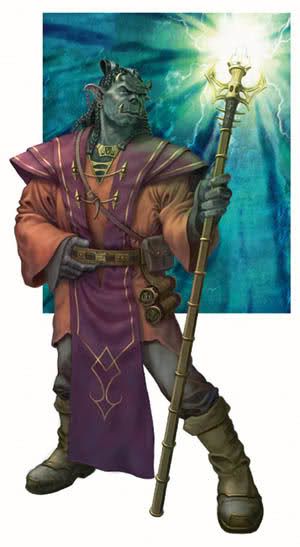 Any of the following kit is ideal when volunteering for a skirmish or battle involving the Grendel.

If you are playing Empire or Odyssey, then some of your personal kit may be extremely useful whenever you are volunteering to monster. Imperial kit that is especially useful when volunteering for Grendel battles is covered below.

The Grendel field significant numbers of magicians on the battlefield, usually including them into other units. We are always short of wands, rods and staves, so if you own a suitable mage implement, then it is helpful if you can bring it with you when volunteering so we can cast you as a Grendel magician. Participants who play Urizen sentinels will hopefully find that elements of their costume are well worth bringing with them when volunteering.

Although most Varushkan and Wintermark armour is not suitable for the Grendel, some costume is still very useful. Tunics especially brightly coloured ones that can be worn under a PD breastplate on the battlefield are ideal as is a white shirt or short robe even if heavily embroidered.

Most Grendel generally avoid heavy armour - with the exception of elite Stone Born units, but some of their soldiers who are trained to fight on land will use a metal breastplate, greaves and vambraces. If you have plate and are able to use pieces of it to produce a Grendel look - especially by combining it with an appropriate tunic underneath or even a warskirt, then you could play one of the Grendel heavy infantry.

Navarr players who are used to fighting with spear and shield are encouraged to bring both when volunteering for Grendel roles. The disciplined Grendel tactics are a far cry from the individualistic approach of the Navarr, and playing a Grendel unit may give you a chance to use both spear and shield in a very different way. The leather armour of the Navarr is ideal for Grendel, provided it does not look too rugged and wild.

Freeborn round or domed shields are ideal for Grendel, especially if they lack any obviously Imperial symbol. Brightly coloured clothes, especially trousers are ideal, if they can be worn with a PD breastplate. 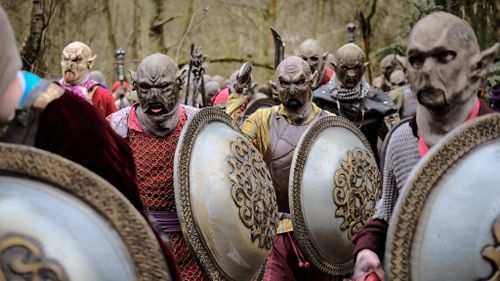 The Grendel adopted the crossbow from the League and any player who has one is encouraged to bring it with them when volunteering for the Grendel. The Grendel do not wear the kind of elaborate garments common in the League, such as slashed doublets or use materials like velvet or jacquard, but a brightly coloured pair of hose or trousers, or similar under-garment is still useful. 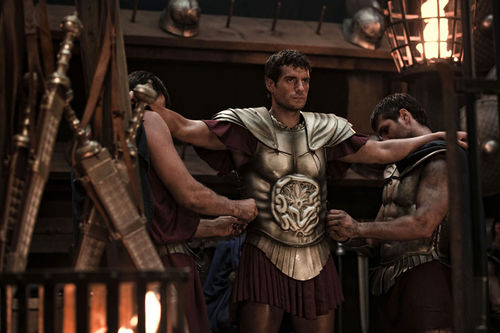 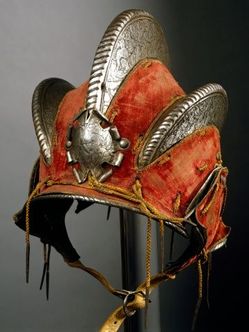 The Grendel costume is partly inspired by the classical nations of the Mediterranean. In particular if you have played Odyssey, then Roman, Greek or Persian costume and armour is absolutely ideal. If you have any kit like this, then please bring it with you if you can. Metal Lorica is best avoided, as are the iconic helmets of the period. A simple round helmet or something ornamental like the one below are perfect for the Grendel.