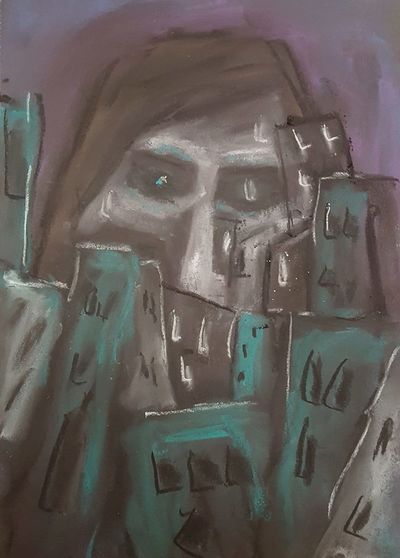 Green Iron depicts the prison where the Lictors take those who break their word.

Most commonly, Lictors are referred to as The Punishers or The Hunters.

They may also be known as The Chainbound, The Binders, the Brass Magistrates and occasionally The Furious Ones. In The League they are sometimes called The Reckoners. Individual lictors bear names such as 'Implacable', 'Inescapable', 'Treacherhound' and 'Wordbinder'.

The Lictors are hooded figures and cloaked, armoured wrapped in heavy iron and green iron chains, with razor-sharp brass claws and horns, and iron face-masks. Armed with scourges, whips, flails, ropes and nets they stalk the dark places of the Autumn Realm, looking for miscreants. Their voices are said to be very quiet, except when they are pursuing their prey when they are said to give voice to deafening metallic cries that chill the blood and may even paralyse a weak-willed target.

The Lictors hunt oath-breakers, and those who refuse to honour agreements, contracts or obligations. In the Autumn Realm they are viewed with some suspicion or fear, and even deadly political rivals think twice before breaking sworn agreements. They can be invoked, apparently, by any of the other eternals of Autumn to officiate over agreements or oaths. Those who break such oaths are mercilessly hunted and either destroyed or carried back to the green iron citadel that the Lictors use as a prison. The Lictors are individually quite potent, but in a group they are almost irresistible, even by the powerful eternal lords of Autumn. Some eternals will simply invoke their name when making a promise, indicating that they consider themselves bound, although to what degree this is actually binding, mortals are uncertain.

Magicians who have studied the lictors disagree as to whether they are an order of eternals, possibly lead by a single powerful figure, or some sort of product of the Autumn Realm itself, an expression of the role that agreements, favours and grudges play in a realm so thematically linked to deception and manipulation.

The Lictors are rarely encountered by mortals, but there are said to be rituals that can summon them to the mortal realm as well as chambers where they can be encountered, or where the outskirts of their green iron citadel can be visited. They can be persuaded to offer boons that deal with binding and holding prisoners, especially oathbreakers and those who have debts to pay. They can oversee mortal covenants, oaths, promises and contracts, placing powerful curses that may fall on those who break their agreements - or even calling down the ire of the Lictors themselves.

They may sometimes accept prisoners; how they transport a mortal prisoner to the Autumn Realm is unclear, and it may be that they simply kill them. They can also allow access to some of those creatures and beings imprisoned in their citadel. They appear to value green iron especially, although they have never explained why and simply ignore questions - it is theorized that they may use it to expand their citadel, or even to craft new Lictors.

They also very occasionally offer bounties - although what someone would have to do to come to the attention of the lictors is unclear and has lead to much nightmarish speculation.