Stories of Jack have been told since before the Marchers seceded from Dawn. Jack was said to appear when words or actions were needed to help common folk with the daily challenges of a life born of hardship and graft. Jack was the farm hand that appeared to help with a difficult harvest, the beater that arrived to assist with local disputes, the Landskeeper that came to lend their wisdom, or the musician who lightened a burden with shared song. A solitary but friendly figure who kept tender watch, revelled in games and lent their voice to a chorus.

With the Brass Coast ritual 300 years back, Jack stepped out of folklore. 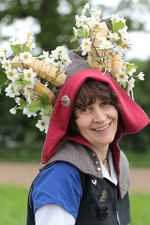 Jack as walks now is Kit the Mummer. Kit travels place to place, bringing news and gossip, plays (invariably magical in nature) and songs and always plenty of tunes to tap your foot to! There is nothing more important to her than keeping the customs and traditions of the Marches alive. This Jack is most at home in the thick of a crowd, whether in taverns, round the maypole on the village green or a town square.

Whether at a rowdy game of foot-the-ball, a jolly Wassail parade or a grim acknowledgement of the shortest days of Winter, she will be there. The more people that are involved in the spectacle, the better. She has a particular fondness for maintaining Marcher magical traditions, including its hearth magic, and is a friend and supporter of the landskeepers.

If you want to find her, look for the horns bedecked in ribbons or seasonal leaves and flowers. You might hear the sound of massed voices raised in song, or the strains of an accordion or fiddle first!