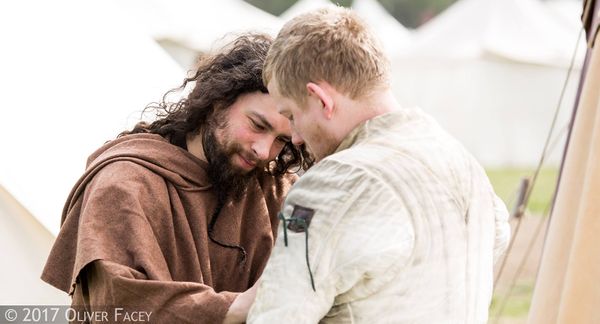 Monks and friars tend to the spiritual wellbeing of the people of the Marches.

A monastery is more than just a religious building - it is a community of priests in the Marches, wielding power in both the Imperial Synod and the day-to-day lives of the Marcher folk. The first monasteries were founded by pilgrims returning from Highguard, and formed the foundation for the Marcher Assembly.

Monasteries are usually surrounded by fertile farmland that is owned and worked by the monks. This ownership of land allows monasteries to wield political power in the same way as a Marcher household. No abbot has yet become the senator for a March – and to date few households have pledged their loyalty to a monastery - but such a development is not outside the bounds of possibility.

A few monasteries are formed purely of scholars who take little part in warfare, but the majority include capable warriors who will don armour when battle is due. “You don't own it, unless you can defend it.” is a Marcher saying that applies even to monasteries, and the abbots have just as much reason as any household to want to protect what is theirs. Some monasteries extend the right of sanctuary to anyone who comes to them, and warriors are occasionally needed to ensure that right is respected.

Monks divide their time between study of the Imperial Faith and working the farmlands claimed by the monastery. Monks minister to the spiritual welfare of the folk around their monastery, largely ignoring Household boundaries. They combine the teachings of the Imperial Faith with respect for Marcher tradition, and are generally adept at employing the custom of shunning to discourage un-virtuous behaviour. Where necessary they may also try to encourage the use of the rough music against an individual who refuses to mend their unvirtous ways, although given the highly informal nature of that custom this can be quite a challenge.

Monks usually refer to one another with familial titles (cousin among monks of the same generation, uncle or aunt when talking to an older monk, nephew or niece when talking to a younger monk).

Monks of any gender wear plain garments, not unlike priestly robes in Highguard, though often simpler and less ostentatious.

A monastery is a good choice for a religious group from the Marches. The costume is highly distinctive, and beside the obvious roles for priestly characters, the power wielded by abbots can make them powerful participants in the politics of the nation.

In addition to priests, a monastery may have martially minded characters who serve as the defenders of the monastery, but unlike the cataphracts of Highguard, these are likely to be armed and armoured monks who have more in common with the yeomen who fight for the Marcher households.

When building a monastery group, there are some difficult choices to make with personal resources. To have influence in the Marcher Assembly and the Imperial Synod, and access to the precious liao which is vital to some religious ceremonies, your group will need characters with religious personal resources. To have influence in the Marches, however, the monastery will need some characters to control personal resources in the form of farmland - which has the advantage that it will also provide money to the monks that own them.