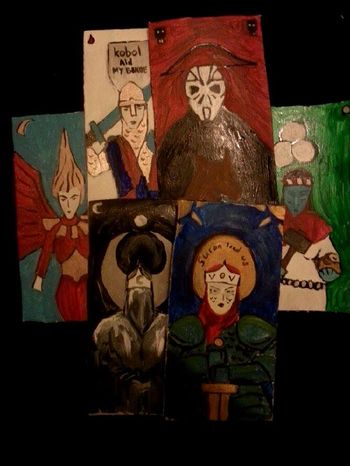 The idols of the Iron Confederacy
:

The Suranni pantheon represent a group of deified Kings and Queens who are believed to watch over the Iron Confederacy. The faithful believe they have great spiritual power which they allow their priests and priestesses to wield on their behalf.

There is some division between those priests who believe that the gods of the pantheon were mortals whose innate strength caused them to transcend mortal existence and become gods through apotheosis (and who tend to believe that other heroes of the Iron Confederacy could in theory ascend in the same way), and those who believe that the gods have always existed and that their mortal incarnations were merely avatars they created to guide their chosen people, the Iron Confederacy. The ascensionists are in the minority, while the incarnates hold the most religious power within the Confederacy. While the two groups argue regularly, they unite immediately in the face of outside interference.

Within the Empire, the worship of the Suranni Pantheon would be considered idolatry, and the beliefs taught by the faith would be both heretical and blasphemous.

Suran, the Queen of Heaven

Associated strongly with the sun, she is depicted as a mature woman crowned with a halo of fire in golden robes or armour. She is the first queen of the Suranni, ascended to heaven. She represents the strength of will, and the supremacy of the Iron Confederacy. As with Kavol, she is also depicted as a great golden dragon or winged serpent, sometimes coiled together with her consort.

Associated strongly with the moon, he is represented as a male figure in silver robes and a crown, his face obscured by a long veil. He is the divine consort of Suran, and seeks out those who would undermine the strength of the Iron Confederacy. Like Suran, he is sometimes depicted as a great silver dragon or winged serpent, sometimes coiled together with his queen.

Arav the Judge, Maiden of Silence

The eldest of the children of Suran and Kavol, Arav is the judge who created the laws of the Iron Confederacy. Usually depicted as male, he is clad in black robes and wears an iron mask. He wields a bow, with which he strikes down the unjust and wicked with disease and misfortune. At his side is a black hunting hound. He judges the dead as well as the living; those who have lived good lives are allowed to pass into heaven, while those who have been weak or cowardly or questioned the ways of the Iron Confederacy are given to his sister Evra to be reforged and cast back into the world.

Kobol the Warrior, Maiden of Battle

The second child of Suran and Kavol, she is the goddess of strength, war and duty. Kobol is always shown in armour wielding a sword. The maiden of battle is the most popular of the gods of the Suranni pantheon, and is said to intercede with her sibling Arav whenever someone dies fighting the enemies of the Confederacy to ensure they are reborn as warriors.

Evra the Smith, Maiden of the Forge

The third child of Suran and Kavol is the goddess of artisans, crafters and merchants. Evra holds a hammer in one hand and is richly dressed, with an ever-full pouch of silver at her belt. She is responsible for forging the souls of the dead into new forms, and is depicted in stories as clever and canny. She supports her brothers and sisters, both by forging their weapons and armour and by spying on their enemies.

Farod the Herald, Maiden of the Dawn

The fourth child of Suran and Kavol is the goddess of messengers and beginnings. She blows her horn to announce the dawn of each new day, and the beginning of spring. She is always shown clad in light red leather, with great feathered wings and bearing a horn in one hand and a sickle-bladed dagger in the other. She has command of the wind, rain and tides and the Suranni see her as the goddess of love in addition to her other roles.

Dumon the Liar, the Wicked One

The worship of Dumon is forbidden in the Iron Confederacy. An ill-favoured, misshapen figure with several orcish features,. Dumon is a traitor and a liar. He has been cast out of the pantheon, and opposes all that is right and good in the world. He gives his corrupt powers to the enemies of the confederacy especially the orcs and those who call themselves 'magicians'. All magic except that of the priests of Surann ultimately comes from Dumon the Liar, and will ultimately destroy the wielders. 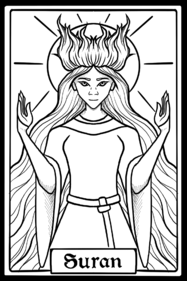 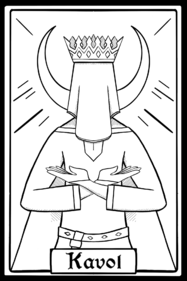 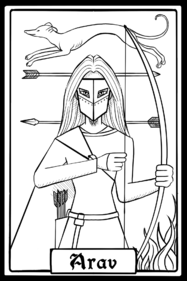 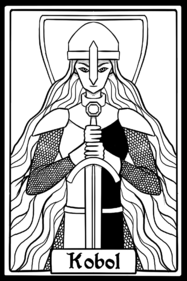 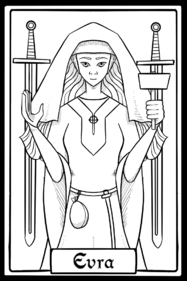 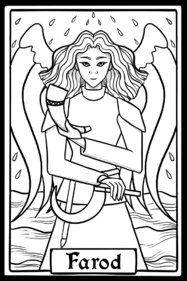 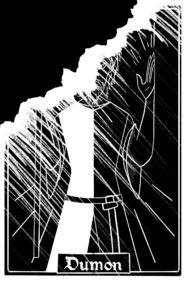