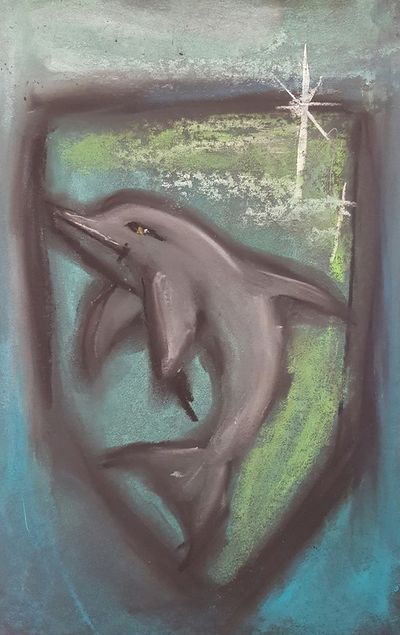 The banners of the Regent of the Eternal Sea invariably depict sea creatures -
both mundane and fanciful.

Rhianos has been called both King Rhianos and Queen Rhianos, but the most common sobriquet appears to be Regent of the Eternal Sea. Rhianos is believed to have relatively close ties with magicians in Asavea and the Sarcophan Delves.

Unknown within the Empire. Foreign magicians characterise them as being somewhat fluid in appearance - "changable as the sea itself". While it is unlikely they are a shapeshifter in the way (for example) the eternals of Night are shapeshifters, it seems that Rhianos slips between masculine and feminine forms with ease, and adopts elements of many different marine creatures as they do so. Depictions in Asavea often include the lower body of a fish, dolphin, or serpent; vivid emerald green or sapphire blue hair and beard; multiple arms; additional octopus-like arms; webbed fingers; and the alien all-black eyes of a sea mammal. Regardless of outward appearance, Rhianos is described as being filled with a bottomless supply of joie de vivre and lust for life and adventure - as well as an endless capacity for wonder at new and exciting things, people, and vistas.

The heralds of Rhianos encountered during the Winter Solstice appeared as blue-skinned creatures with sharp ears and golden markings.

Rhianos appears to be interested in the sea as a place that is full of, or leads to, adventure and opportunities to face and overcome great danger. Unlike many Summer eternals, Rhianos appears to perceive wealth as something that has value - especially if it is gained through heroism or daring - or under conditions of extreme danger. Yet they are not an Autumn eternal - Sarcophan traders have commented that the boons of Rhianos are tricky because they expect that once wealth has been gained it will be "spent" (or indeed "squandered") on fine living, and to create more opportunities for adventure in the future. One Sarcophan ship's mage described the eternal thus "They are always moving, always moving. For Rhianos to stand still is the utmost torment. There is always a new thing to see, there is always a horizon stretching ahead of them. Regret, duty, introspection - these are less than ballast to Rhianos. Anything that weighs them down is discarded in a moment, forgotten before it has entirely sunk out of sight."

It is likely that Rhianos possesses boons related to water, and to both real and fanciful qualities of the sea. Both Sarcophan and Asavean mariners have claimed that Rhianos offers a common boon that ensures any sea voyage will be "eventful but lucrative". This sounds very similar to the enchantment Rhianos offered during Winter Solstice 380YE. The "lure of adventure" presented challenges and treasures to sea captains engaged in privateering and trade during the Winter Solstice 380YE.

According to some scholars, Rhianos also provides martial boons to those they favour, but these boons are always distinctly personal in nature. There appears to be no large-scale enchantment that enhances the ability to engage in warfare for example. More than other eternals of Summer, Rhianos seems to favour the individual over the group, the champion over the soldier.