The object of war is not to die for your country, but to make your enemy die for theirs.

Adelmar was recognised as an exemplar of Ambition by the Imperial Synod in 176 YE. 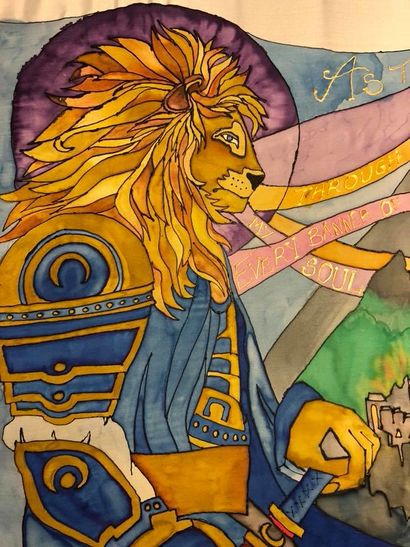 Widely believed to be a changeling, Adelmar is often depicted in art as having leonine
qualities significantly more pronounced than those possessed by any lineaged. Some
priests consider images that depict Adelmar with a lion's head to be blasphemous, while
others defend them as artistic expression intended to bring out the deeper truth of his
fierce ambition.

Adelmar of Arnet, also known as Adelmar the Lion, or the Lion of Arnet, is both the founder of the Academy of Arms and an exemplar of Ambition.

According to the Scroll of Noble Deeds, housed in the Imperial Library, Adelmar was born in 32 YE and grew up as a younger son to a family of farmers residing near the Dawnish town of Weaving.

At the age of eleven his parents played host to a visiting company of Knights-errant. The Knight-commander, Elaine of Faybourne, identified something special in Adelmar and took him under her wing, apprenticing him as her squire but also teaching him the way of the sword and setting him on the path to glory. He proved a quick study and trained hard, improving his techniques until he excelled with both sword and spear. By the age of sixteen he was as skilled as any of the Knights-errant and was granted command of the company's yeomanry.

During this period Adelmar continued to demonstrate a great thirst for knowledge. He befriended an itinerant Urizen scholar named Nicassia, who became a lifelong companion and the primary annalist of his accomplishments. Not content with improving his martial skills and taking part in the many conflicts with neighbouring barbarians, he still found time to learn his letters and with the aid of Nicassia, became a keen student of all aspects of warfare. However, his main area of interest related to the styles and perfection of personal combat. He sought advice from knights that he met on campaign and poured over martial tomes secured for him by Nicassia. Wherever they travelled, wherever they fought, Adelmar was driven by the need to refine and improve his combat skills.

One day the company of knights were approached by a band of foresters. They told the knights about a giant bear that had started preying on their village. They were poorly equipped to deal with such a monster and other knights who had attempted to aid them had fallen before the monster. At his request, Adelmar was granted his Test of Mettle; to destroy the great beast in combat. A grown bear is always a challenge for even the most skilful of knights, especially one that had overcome its fear of humans, but Adelmar was undeterred and relished the confrontation. He followed the tracks of the animal to a cave in a secluded dell. The surrounding area was littered with shards of torn metal armour and shattered spears - the remains of the knights the beast had killed. The bear had caught his scent and as he approached its lair it launched itself at him. The beast had clearly been twisted by foul sorcery for it was enormous even for one of its ilk. Standing four yards high at the shoulder, it was covered in long golden hair matted with the crusted blood of its victims. A row of six large horns protruded from its crown and its claws were twisted blackened daggers, the length of a person's forearm. In the ensuing battle Adelmar breaks his spear against the bear's hide which is so thick that it resists even his sharpest weapon. Not to be beaten, he adapts his fighting style and targets the monster's own weapons and one by one, he hacks the talons from the beast's paws. He then slays the monster with one of its own severed claws which he thrusts deep into its heart. He removes its pelt and fashions it into a golden fur cloak which he retains throughout his career. Some scholars believe this has mistakenly led to the epithet "Lion" when it should in actuality be "Bear".

In 52YE, with Adelmar now a fully fledged questing knight, his company participate in the combined Marcher-Dawnish expedition to liberate Semmerholm from orcish occupation. An early skirmish with orc ambushers leads to the death of Elaine of Faybourne. In her will she expressed her desire that Adelmar take over her personal estate naming him "the most comely of Knights, skilled beyond measure in his mastery of arms". The other knights appear to agree with her statement and gladly accepted him as their new Knight-commander.

During the Semmerholm campaign Adelmar meets with the leader of the Imperial army Empress Richilde, the Sun Queen. He impresses the Empress with his skill and zeal in combat and, when not fighting, becomes a favoured figure among her court. It is believed that he reveals to her his ambition to start his own training school, dedicated to the perfection of combat. Impressed by the young knight, the Empress grants him the right to lead the heavy assault upon Arnet Keep.

Adelmar leads his knights in a charge upon the breached gates of the castle. Witness reports state that the fighting is intense and bloody work but by midday Imperial forces storm the inner fortress and set upon the defenders. Adelmar engages in personal combat with the feared orc warlord Tu'Chak, and slays him before delivering his head on a golden plate to the Empress. Several notable historians mention these actions in their accounts, paying particular note to Adelmar's incredible strength and speed. For his 'distinguished actions and demonstration of virtuous deeds', Empress Richilde rewards him with the Imperial funds required to establish an academy dedicated to excellence in personal combat, naming him her Lion of Arnet. However, in a notably adroit political move designed to prevent any grumblings of favouritism, the Dawnish Empress orders him to establish his academy in the Urizen territory of Redoubt and appoints the Urizen born scholar Nicassia, to support him in a role equivalent to seneschal.

Adelmar's reputation attracts many potential applicants - both as students and teachers. Unfortunately, by its very nature, places within the academy are limited. Although all are welcome to apply Adelmar insists that only those that demonstrate the true determination for self improvement and excellence will be accepted as students. A complex process of physical and mental tests are devised to identify those who possess the characteristics required to become the most deadly warriors in the Empire. This unorthodox selection process results in eager novices mixing with seasoned veterans and weapon masters - each seeking to reach the zenith of their ability.

Over the years the Academy of Arms, and Adelmar himself, become a lure for weapon masters from across the Empire and beyond - what the Urizen refer to as a 'node' among the 'net of heaven'. Throughout this period, Adelmar continues to train others while honing his personal martial talents. Eventually he masters every weapon commonly used within the Empire and stands undefeated among his peers. In the year 77YE, he makes the pronouncement that with no challenges left within the Empire, he intends to travel beyond the borders, seeking and mastering new forms of martial combat wherever they may be. He issues orders that the next master of the academy is to wear his cloak and become the new 'Lion'. After this declaration he simply vanishes and later that year Bryony of Tharn is appointed as the next Master of the Academy of Arms.

Many of those who train at the Academy go on to eventually found their own schools and the practice spreads throughout the Empire. Variations on the original Academy of Arms can now be found in most major cities, many specialising in particular styles or forms of combat.

A few have argued that after Adelmar recognised the perfection of his achievement he transcended which is why he disappeared. However, others have argued that his own statement that there was more for him to learn beyond the borders of the Empire would negate such an assumption. A few claim that Adelmar was poisoned by jealous rivals but there is little to no evidence to support this claim. The most popular theory is that Adelmar simply took the opportunity to leave quietly with the least pomp and ceremony possible, his mind clearly focussed on the journey before him as it had been in so many aspects of his life.

For many citizens of Dawn, Adelmar represents the epitome of the questing knight or knight-errant. He encapsulates the drive and ambition to succeed, to serve the Empire, destroy her enemies and be bathed in glory, heralded as a true hero of the Empire.

There are those, especially from Urizen, who believe that while his ambition must be recognised one could equally argue that so must his courage and loyalty, but that it is actually his pursuit of wisdom that underlays his great success. These arguments tend to be somewhat circular and remain as theoretical disputes to this day.

It has been noted that Adelmar himself was recorded as saying that "The quality of a person’s life is in direct proportion to their ambition, expressed via their commitment to excellence, regardless of their chosen field of endeavour."

During the year 176 YE the Imperial Synod recognised Adelmar as an exemplar of Ambition.

The Assembly of Ambition cited the following signs of Adelmar's exemplardom: