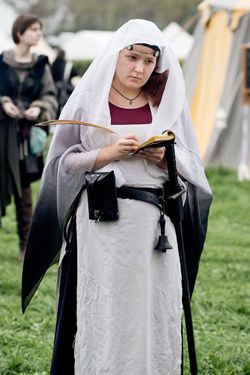 These robes are modeled after the shrouds used to wrap the
dead in Highguard.

The power of this enchanted robe is to grant a devout wearer a great reserve of inner strength; they bank the fires of mortality, helping the wearer to endure pain and suffering that might overwhelm and kill other people. Also called variously a martyr's shroud, a gravedigger's coat and a widow's (or widower's) gown these robes are modeled after the shrouds used to wrap the dead in Highguard and several other nations.

In contrast with many other enchanted robes they tend to be sombre, with limited decoration. The cloth is bleached with beggar's lye, toughened with ambergelt, reinforced with dragonbone and finally embroidered with delicate silver threads. Outside the Brass Coast they are rarely coloured, being commonly left white rather than any other shade.

Among the Freeborn, by stark contrast, they are usually dyed a deep red or yellow colour, and the sleeves and hems are much more likely to be ornamented with tiny gemstones. Here they are called flickering shrouds; while their association with death is not denied, it is celebrated rather than mourned.