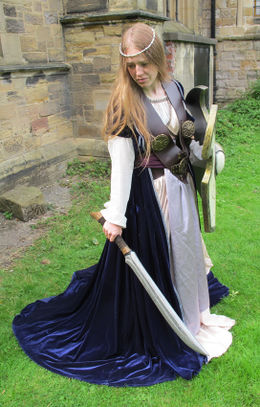 These robes are sometimes considered the pinnacle of the weaver's art. The process of creating them consists of carefully treating the fabrics involved with beggar's lye and colouring them with dyes infused with iridescent gloaming. The magisters of Highguard are particularly fond of these beautiful vestments, and use only the richest dyes to combine with the finest and most subtle decoration. In Urizen the robes are delicately shaded and sometimes simply called Robes of the Magi, although even there the traditional name is used more commonly.

In the Brass Coast by contrast these robes are usually bright, clashing colours and fine fabrics with beautiful dragonbone decorations, while those volhov lucky enough to own an ashen mantle prefer one made from fine waterproofed lamb's wool.

For many magicians an Ashen Mantle and a Staff of the Magi are an obvious combination, greatly increasing their spellcasting abilities.

She leant on the lectern, cleared her throat, and looked down at her notes.

"Dating from the second century of the Empire, the Shroud Empirical is an item of historical, magical and artistic significance, and hence far too valuable to be actually worn except on occasions of national celebration. One of the very first Ashen Mantles constructed (at least to the modern arcane definition), the Shroud was commissioned by Arbiter Layana as her official robes of office.

"A well-constructed Mantle is a challenge to the skilled crafter, but the Shroud was intended as a clear signal of the dominance of Urizen's arts to the rest of the world. It depicts a map of the entire nation in silken threads, picked out with seed pearls and minuscule worked glow-stones. Skillfully interlaced with this are passages from some of the greatest philosophers and magicians of Urizen, some lines written to a scale so small that they are difficult to read with the naked eye. Woven through it all are threads of puissant magical power arranged in a pattern meant to depict the Net of the Heavens itself.

"Those of a conspiratorial bent also assert that Layana left the secrets of many of her most cunning rituals somehow woven into this relic, for those with the wit to decipher them. It is said that more than one archivist has gone insane simply staring at its endlessly complex pattern."

She cleared her throat again and looked up.

"As you can see the item is in excellent condition, despite its sojourn in the ruined citadel of Karos. Two of my agents died recovering this beautiful and powerful artefact from Spiral. It is unique, a priceless example of artisanship and a symbol of Urizen cultural ideals.

"So I believe we shall start the bidding at one hundred crowns, ladies and gentlemen.

"Do I hear one hundred?"
Retrieved from "https://www.profounddecisions.co.uk/mediawiki-public/index.php?title=Ashen_Mantle&oldid=50450"