Staff of the Magi

Staff of the Magi 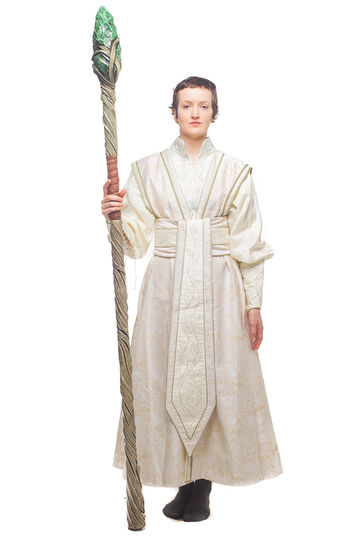 Often carried as a tool of office by powerful magicians, these staves provide potent utility. The staff itself is usually weirwood, shod with orichalcum and embellished with dragonbone and often surmounted by a fine, carefully shaped crystal of tempest jade. The rune Hirmok, which denotes mastery, is often incorporated into the body of the staff or carefully engraved on the crystal. As a consequence some Wintermark artisans refer to this magic item as a Scythe of the Magi (albeit in a somewhat tongue-in-cheek fashion). In Urizen it is customary to lay out the embellishments in the pattern of one of the constellations, and determining which sequence of stars has been chosen can offer insight into the mind of the bearer - indeed some traditional magicians suggest that not binding the staff to a constellation runs the risk that it will become resonant with the Wanderer. The colour of tempest jade used to construct the staff can also have particular significance - for example both Navarr and Freeborn magicians favour red or dark orange crystals when choosing a Staff of the Magi. For the Navarr, it is a reminder of blood while for the Freeborn, it is a reminder of the power of flame.

The power of the Staff of the Magi is straightforward, and easy to underestimate. It allows the bearer to perform the basic magical incantations known to every magician - operate portal, detect magic, and create bond - without tapping into their personal reserves of power. This reserve of magic appears bottomless, which has intrigued magicians and artisans alike down through the ages for obvious reasons. Magical scholars theorise that the staff somehow taps into the same ambient, invisible flows of mana that give rise to mana sites. Rather than store this energy, they serve as a conduit, tapping an infinitesimal fraction of the great ocean of magic power that surrounds and permeates all things. This power can only be harnessed in the service of the most straightforward incantations however - attempts to use a Staff of the Magi to cast more potent incantations simply fail.

This capacity to interact with ambient magical energies is not without potential risks however. There are several stories that breaking or shattering a Staff of the Magi can have unexpectedly dangerous consequences, especially if the staff is being wielded in an area already rich in magical energies. The most substantiated involves a fight between Salios of Endsmeet and the Grendel orc Dughal the Stormlord during the fall of Spiral. While fighting over the Dragons Graveyard, one of the two combatants destroyed the other's Staff of the Magi, apparently resulting in a devastating explosion of magical energy that killed both magicians and several of the warriors fighting near them and produced sufficient concussive force to blast combatants off their feet in a significant radius.

Some philosophers suggest an alternate interpretation of the staff's power, however. In A Destiny of Magic, Teodora of the Risen Sun speculated that all humans possess the potential to "awaken" themselves to the power of magic - that perceiving magic and interacting with the bonds that tie people together were nothing more than a "sixth sense" no more supernatural than sight or hearing. She suggested that magicians were not actually performing "spells" at all when they examined auras or took command of a magical portal - they simply needed the crutch of incantation to allow themselves to access these superior senses that are the birthright of all humans. Her argument was that the Staff of the Magi proved that human magicians did not need to expend mana at all, at least to use the basic spells, and that with sufficient study and self-knowledge, all magicians would be able to harness there superior senses and naturally perform the functions of a Staff of the Magi. She allegedly made some actual concrete progress toward proving her theory - there are scattered references to a ritual she was working on at the Halls of Knowledge that created an enchantment similar to the effect of the Staff. Sadly, something went wrong in her studies and in 249YE she was admitted to the Spire of Twisting Shadows. She never recovered.

The power of the Staff of the Magi is far reaching but has one interesting limitation - despite the facility it offers with magical auras it cannot be used to examine conjunctions of the Sentinel Gate. While there are many theories, none have proved more convincing than that of Eduardi de Tassato who simply suggested that the Sentinel Gate is surmounted by the Wanderer "... and the Wanderer is not in favour of anything that provides anyone with a free lunch."

OOC Note
It's important to note that the Staff of the Magi is a staff, even though it does not actually grant ritual power. This means that a character does not need the battle mage skill to bond to it, and it does not need to be a weapon-safe physrep.
.
“Dearest Morgana, daughter of my heart, the day has come to pronounce you great among Nobles. You have been tested in the field of battle, where you have made a great name for yourself with your graceful rod-work and fine timing, thereby demonstrating fine Courage. You have aided the yeomanry of the land, guaranteeing the bounty of the land through the rituals of Spring and Autumn, and have thereby demonstrated both your skill and your Wisdom. You have been tested by privation as you travelled alone, and your faith has not wavered, demonstrating your unswerving Loyalty to the House.

“You have always been dear to me since the day we met, Morgana, when you were but a child, barely a citizen. You made such a fine scribe that no-one could ask for better, and you studied well at my side. You were so proficient in your magic – and so stubborn, yes, girl! – that I thought surely there was the blood of the unicorn in you, and you never let defeat or hardship sway you.

“My heart and my House both love you as a fine daughter, Morgana, and both advised me equally to commission this gift as we pronounce you Lady of House D’Arnay. With this staff in your hand, your own fearsome talent will flow yet more easily, helping you strive for ever-greater achievements in your name and the name of D’Arnay. It will smite what you command, topple what you command, hold and harm what you command, and restore and strengthen what you command.

“Arise, Lady Morgana D’Arnay, to the service of your House, and take your Mage’s Staff into your hands. Such deeds as yours deserve no less reward.”
Retrieved from "https://www.profounddecisions.co.uk/mediawiki-public/index.php?title=Staff_of_the_Magi&oldid=79880"