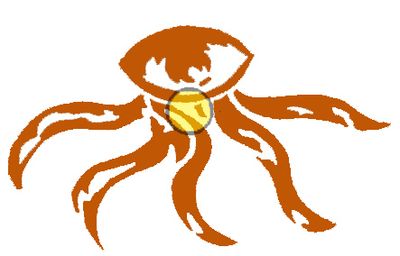 There is a great deal of discussion about what precisely this star represents. The most common interpretation is Things Are Not What You Think, but older texts refer to the law of the Wander as Things Go Awry.

The Wanderer is a reddish star that appears to migrate across the night sky, most recently passing beneath and through the legs of The Stallion during the course of the summer months.

In constellation symbology it is usually depicted either as an octopus with short arms, or some kind of eye with many writhing limbs. The reason for this depiction is unclear but it dates to the oldest depictions of the constellations.

Less a constellation than a single bright point of light that wanders seemingly unpredictably across the sky, almost every culture has its own name for this star. In Wintermark they call it the Kraken Eye; in Varushka Flame-in-the-Dark; and in the League it is the Red Dancer. Dawn calls it the Hand of Alderei; in the Marches they say it is the Bloody Crown. In Navarr it is See-Me-Not; the Brass Coast call it the Octopus. The Imperial orcs call it Outcast; only in Highguard and Urizen is there any agreement; both call it, simply, the Wanderer.

The Wanderer is an ominous star. Many astronomancers predicted a period of instability in the Empire when the star made a close approach to the Stallion; views proven all too true when news of the Empress' death arrived. It stands for fate, chance, disaster and change; to follow the Wanderer is to be in a place without maps. In Varushka they say following the Wanderer will lead you into the country of the bats; you should not tarry there.

While it is generally seen as an ill-omened star, the change it brings and the fates it reveals are not always negative - even if they seem so at first. But make of it what you will - where it passes, the status quo is upturned and thrown down for good or for ill.

There is a secondary association of the Wanderer; during interregnums, the Wanderer is seen as the star representative of the Empress-to-be. Fate calls an Empress to stand; perhaps Fate puts trials in their way too.

The most well-known depiction of the Wanderer is over the arch of Sentinel Gate, which stands today at Anvil since it was transported there when the Urizen joined the Empire. It is the mechanism whereby the Empire sends its heroes to fight in pivotal engagements during each solstice and equinox, and has a number of poorly understood magical powers. The presence of the Wanderer in such an important location, on such a vital item, occasions a great deal of debate among astronomantic scholars.

Invoking the Wanderer in Ritual

A dangerous game not for the faint of heart. The Wanderer is, like the Great Wyrm, a powerful change agent; but where the Wyrm transforms, the Wanderer tears down and rebuilds. It can also stand for destiny - inexorable fate, the kind that cannot be escaped no matter how much you struggle.

Invoking the Wanderer also gives a ritual Imperial connotations; other astronomancers will watch such rites carefully for clues and signs of Imperial ambition.

Alignment with the Wanderer is universally reported to be an unpleasant experience. The cold, rolling inexorability of fate leaves the ritualist shivering and bleak; some have reported watching the red star roll beneath them, until a great, milky eye opened and regarded them, bringing to them a full and terrifying understanding of their own insignificance in the universe.

It is not uncommon for ritualists who invoke the Wanderer to run mad shortly thereafter. The Spire of Twisting Shadows in Urizen was a common destination for such damaged individuals, where they could be cared for quietly. Few returned.