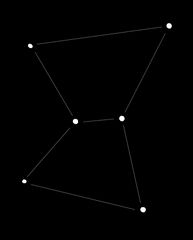 The Chalice travels along the horizon from south-east to south-west from late winter to late spring and is absent from the night sky for the rest of the year. It is sometimes referred to as the ‘Double Chalice’ or the ‘Cup of Choices’ as it is an almost symmetrical constellation of six stars.

The healing cup, or the Monarch's, the Chalice is strongly associated with healing and mending what is broken. It has a second deeper symbolism to do with symmetry, mirrors, reflections, twins, and things that are apart which were once together.

In the Brass Coast, the Chalice is sometimes called the Mirror Cup or the Seeing Cup and has a strong association with fortune-telling, seeing the future and predicting dooms yet to come.

Invoking the Chalice in Magic

Ritualists who become obsessed with the Chalice often seek out pairs of twins, or physically very similar participants for their rituals; others seek to address their participants in matched pairs or otherwise have the mirror each other's behaviours. The Chalice is usually invoked as part of rituals to heal or to mend; the binding of flesh that though once together is now sundered is a common application for the healing cup. Ritualists also invoke the Chalice as a function of sympathetic magic – what was once together is still together spiritually. 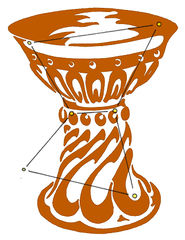 Tulpas of the Chalice

Tulpas of the Chalice always appear in pairs – male and female, dressed in black and white, or sometimes manifesting as merrow and naga. They usually bear cups goblets or some other representation of the chalice itself. Even more enigmatic than the usual run of tulpas, such creatures seldom speak or directly interact with people; they have been known to lead help to those injured and alone or to appear as a warning before an event causing great injury. There is a tale in Dawn of a questing knight who three times refused to follow Chalice-bearers to the injured; when they appeared to him a fourth time they left him with the worst injury of his life to date reopened as if it had occurred that very day.

Ritualists who “brush by” the Chalice report being filled with energy, well-being, and love for life – with an urge to bring together things that have been set apart and mend things that have been broken. Often this will manifest as a kind of hyperactiveness or worse, a tendency to meddle in the social affairs of friends and neighbours. Chalice ritualists have a tendency to become the worst kind of matchmakers.