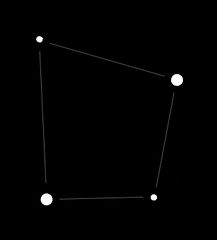 The Door is comprised of four bright stars and is generally found by following the arrow of The Lock’s brightest star. It only appears in full during the winter months.

Portals, transitions, thresholds, moving from one state to another – the Door is one of the most commonly used images in astronomancy. Marking transitions between seasons, years, Imperial reigns, the Door is commonly used to denote the change from one status or condition to another. The Door is invoked in ceremonies to mark the passage into adulthood of children; it is also commonly invoked whenever a new archmage who is inclined to astronomancy is appointed.

The Door is also traditionally strongly associated with Gates – any magical transportation method will usually be done under the auspices of this constellation.

Using the Door in magic

The obvious associations for the Door are of course transport rituals; a more subtle use of the symbology is for rituals where the subject or target is clearly transformed from one formal state into another whether that be willing or otherwise. 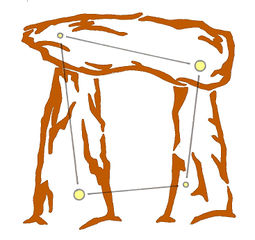 Tulpas of the Door

The Door does not tend to create anthropomorphic thought forms; instead it tends to manifest portals, transitions, or doorways. There is a strong connection between the more esoteric studies of the Door and mirror magic; the Door will sometimes manifest Tulpas who appear to look very much like or dress in a very similar fashion to the ritualist themselves.

To align with the Door brings with it a strong sense of motion and forward travel. Ritualists experiencing this often find it impossible to stay in one place and frequently head off, often with no clear idea of where they're going. The urge for movement and change can be strong; sometimes ritualists abandon clothes or implements they have used for years after a strong Door ritual.