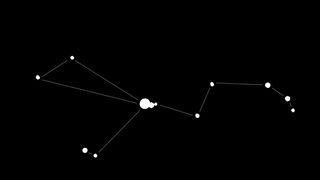 The Stork can be found close to the horizon in late autumn and late spring and is absent from the night sky throughout the summer months. A constellation of twelve stars it is located on the opposite side of The Claw to The Chain. After The Great Wyrm it is probably the next largest constellation along with The Mountain.

The Stork is a curious constellation and many disagree about its precise meaning. To some it is a symbol of precision; the stab of a long beak into the water. To others, the Stork is the freedom to choose – though it could fly away, it remains in the water. If it may be said to have any one meaning, it is that things are important – that focus and concentration are worthwhile when the need is great, that life is not just a pointless procession of accidents one after another. The Stork teaches that there is a purpose and a meaning to our lives even if that meaning is not obvious or clear to us. Not quite fate or predestination – more a sign from the universe to say “Trust me, I know what I’m doing.” And that the decisions we make dictate the life we will lead.

The Urizen say the Stork means making the right choice for the right reasons; in Highguard they call it the Decision to be Virtuous. It is about accepting responsibility for your own destiny, being the master of your own fate. Accepting that things matter, and that the decisions and actions we take in life influence them.

Using the Stork in Ritual

The Stork is the decision-point, the marker in the road where fate turns left or right. Invoking its power in ritual is to take responsibility for your own actions, to accept that the decisions you make will have far-reaching consequences. It is a rarely invoked constellation and often it is only invoked for large, powerful rituals which may have a profound effect on the future fate of the Empire or a large community.

In smaller ways, the Stork is often seen as the patron constellation of the Senate; Senators are hoped to show the traditional virtues of the Stork in their voting. Rituals specifically to do with senators or the Senate might invoke the Stork. 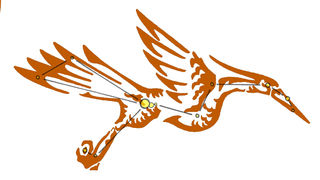 Tulpas of the Stork

“Are you sure…?” are the words most likely to be heard from the lips of a Stork tulpa. Their role seems to be to challenge, to ask rhetorical questions and to tease out of people the true motives and understanding of their actions. The most well-known is the Plague-Hat, a masked figure known in Sarvos for their inquisitive and relentless questioning of those about to embark on a momentous decision.

Coming close to the Stork is a rare feat, for it is not often invoked. Those that do speak of a great grasp of the web of destiny; similar to those who brush past the Web, but more to do with the tide of history and the inexorable march of fate.