Things Are Connected By Blood

The Three Sisters is probably the smallest constellation. A run of three bright stars just outside one edge of The Door they are comparatively close together and only appear above the horizon during the winter months through to mid spring.

There is some disagreement over the naming of the stars. In most of the Empire the stars that make up the Sisters are called Erigo, Riqueza and Guerra by Imperial astronomers, although there is a great deal of disagreement as to which one is which. Older texts refer to them as Suspire, Lachryma and Tenebrae.

Sometimes known as the Three Sorrows, the Three Sisters stand for family and bloodline; kith and kin, belonging, being on the inside rather than the outside. Legend speaks of them being three sisters cursed to carry the sorrows of the world; each of them bearing a different part of the burden. Suspire, the youngest, carries the world’s sighs; Lachryma, the middle sister carries the world’s tears, and Tenebrae, the eldest, carries the darkness in the souls of people.

Knowing as they do all sorrows, it stands within their power in legend to grant surcease from sorrow by gifting it to another; though in the tale their gifts always carry a sting in the tale.

In Navarr, Wintermark and Varushka they are called the Three Mothers, rather than the Three Sisters.

Invoking the Three Sisters in Ritual

The Three Sisters stand for regret, for sorrow and for consequences; they are a popular choice for cursing with, bringing down the sorrows of the three sisters on an opponent is seen as less inherently dangerous than invoking the Wanderer or the Drowned Man. They can also stand for the ties that bind families, tribes and communities together; rituals to affect a specific bloodline or group may benefit from invoking their name. 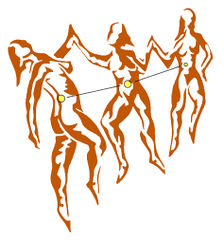 Tulpas of the Three Sisters

Tulpas of the Sisters almost always take the form of one of the Three Sisters themselves; a veiled young woman sighing sorrowfully, a middle-aged woman weeping tears of blood or a night-veiled old woman silent and deadly. Beware Tenebrae.

Coming too closely into alignment with the Sisters brings with it an overwhelming sense of sorrow, woe and regret. Bleak, black depression can fall on the ritualist and be hard to shift; others fall to weeping and woe.