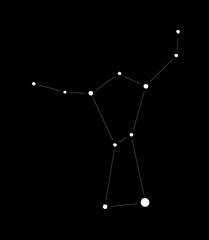 The Drowned Man contains eleven stars, the brightest of which forms the ‘foot’. The ‘arms’ stretch between the head of The Phoenix and the right side of The Mountain.

The Drowned Man is an ill omened constellation especially feared in the League and the Brass Coast. It marks the end of things, but not necessarily as part of the natural cycle. The Drowned Man marks abrupt endings where things are left incomplete; work half done, lives half lived, ambitions unresolved and loves unrequited. Its endings often come through violence or ill fortune – among the Navarr and the Kallavesi it is called the hanged man.

The Drowned Man is a powerful sign of ill fortune, doom, and violence; League sailors cursed under the stars of the Drowned Man commonly refuse to leave port.

This figure is seen by some merrow, especially those of Urizen, as a symbol of hubris: "Just because you have gills doesn't mean all the pearls belong to you." They do not associate it with death and doom as so many others do but instead see it as a lesson – do not overreach yourself and swim too deep.

A large, ancient earthworks in Reikos, named the Sign of Tamar appears to depict this constellation.

Invoking the Drowned Man in magic

The Drowned Man is a powerful cursing tool and like all such double-edged. Invoking it in ritual usually means great misfortune and frequently, death. Ritualists who commonly used the Drowned Man in their rituals tend to be viewed in much the same way as soldiers who take a little too much pleasure in the practice of their art. 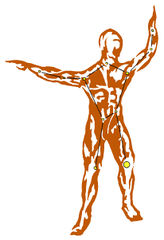 Tulpas of the Drowned Man

The tulpas of the Drowned Man are among the most fearful of all such beings. Sailors speak of beautiful people with voices of surpassing harmony who lure the unsuspecting onto the rocks; others talk of bindweed and see plants that coil unnaturally around the ankles of sailors in the water. Worse still are those that take the form of the drowned dead, staggering forth from cold dark water to give their former friends and lovers a clammy embrace.

In Varushka the merrow speak of Megas Vodyano; the river king who takes the unwary and drowns them in the cold waters of that land. In Urizen they fear the coming of the Spirit of Dark Water, a dripping, icy, thing cowled in pond weed with cold clammy flesh.

Ritualists who come into alignment with the Drowned Man seldom enjoy the experience. They speak of crushing pressure and darkness; of being unable to breathe or see. Some have been known to cough saltwater out of their lungs after a particularly potent ritual. All, though, find themselves fearful of water for several hours afterwards.

Invoking the Drowned Man is not for the faint of heart.