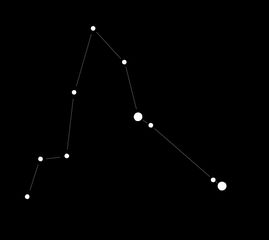 Things are Not Easy

The Mountain is formed of ten stars and appears low to the horizon. Whilst the ‘peak’ is visible throughout the year, the constellation is partially obscured during the winter months, only completely rising in to view during the late spring and summer.

The Mountain can also mean great reward in return for great toil – such as those who work in mines in such mountains. The Mountain tells us there is no easy life or free lunch - anything worth having is worth fighting for.

Invoking the Mountain in magic

The Mountain is often also used to represent the end of a quest; the object, achievement, or outcome desired by the ritualist to reach which requires great effort, strife, and toil. 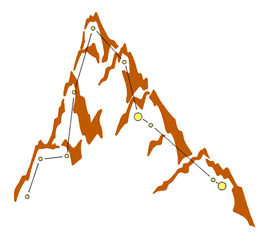 Tulpas of the Mountain

Tulpas of the Mountain take many forms but are often known to appear near bridges, crossroads, or gates. There they will demand any who pass to answer a riddle or perform a small task; only those who succeed will be permitted to pass without further harassment. They do not appear to take any pleasure in their task, regarding it instead as a duty.

Ritualists who come close to the Mountain in ritual report that they are often overwhelmed by a feeling of immobility and obstreperousness. They become awkward, uncommunicative, unfriendly and wilfully difficult.