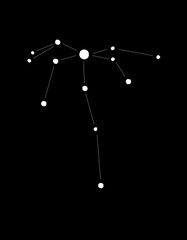 The Oak is usually located by following the final strand of the Web to pinpoint the Oak’s brightest star, which forms the apex of this constellation of ten stars. What is commonly referred to as the ‘Root’ star is obscured by the horizon until late spring, when it rises over the following months. By late summer this constellation is found almost overhead.

The Oak is the tree which has the strength to grow out in defiance of the ground; which stands fast against the buffets of fate and weather. Oak endures; it gains strength as it ages and it stands fast against all comers. It is dependable, reliable, does not blunt or rust, and can be turned to many uses. Barricades and buttresses, shields and staves, the simple homespun stuff of civilisation. In Varushka where the Oak is not a natural tree the constellation is known as the Summer Tree; in the Marches it is referred to as "Our Good Oak".

The Oak can also refer to origin and sense of self; communities that put down deep roots or that have a very strong personal identity often feel the Oak represents them.

Invoking the Oak in Magic

Invoking The Oak is to call on natural strength, on the virtue of good rich earth and the tenacity of that which grows from it. Spells which strengthen, cause people to stand fast, defy other spells, shields the innocent from effects, or are associated with wards all benefit from the implication of the Oak. Some subtler ritualists also use The Oak or more specifically the Acorn as a symbol for young warriors and those not yet passed their test of citizenship; associating them with the Oak is believed to provide them with strong and beneficial auspices for the future.

The Oak also has deep roots; rituals to do with hearth, family, sense of self and belonging all benefit from the presence of the Oak as of course does the national egregore ritual. 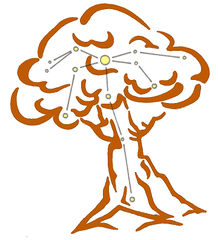 Tulpas of the Oak

The Marches have a long history of Oak tulpas – the Green Man, Puck-in-the-Moss, Hob-Robin and the Antrobus Horse are all thought-forms associated with the Oak. They tend to solitary and are usually only encountered in heavily wooded areas. There are some reports though of a woman in armour all made of wood and leaves who appears to Dawnish knights and Highborn in need of strength and fortitude, especially if they sit vigil during the night. Such people speak only of a silent, warm, reassuring presence; and of being ready, in the morning, for the trial.

Ritualists who invoke the Oak speak of a strong sense of self and identity; of a deep awareness of national and imperial pride. Some believe that invoking the name of the Oak before taking liao can increase the chances of placing one in touch with a past life with a past sense of self. One Suaq ritualist described brushing by the Oak as "feeling like I could see a thousand ancestors stretching before me into the past".