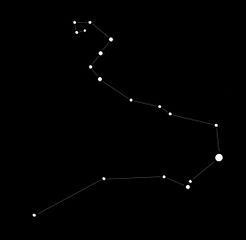 The Great Wyrm is the largest recognised constellation comprising of 17 stars. It begins just to the south-west of the brightest star of The Drowned Man, curves below and behind the tail of The Phoenix to pass between it and The Chain and concludes just to the west of The Web.

The Great Wyrm is the emblem of transformation and transfiguration - not just that change is possible but that it is inevitable. It is often used as an emblem or representation of magic itself; it is especially held as influential in alchemical workings where the process by which substances combine to create something greater is called "passing through the flames of the Great Wyrm".

The touch of the Great Wyrm changes everything, for good or ill; in much the same way that introducing magic to a situation can transform it well beyond the original intent of the magician. The Law of the Wyrm is a nickname for unintended consequences spilling from well-intentioned actions.

Invoking the Great Wyrm in Ritual

The Great Wyrm is a very large constellation and is only invoked by confident or large ritual teams - it is especially common to invoke it in magical rites and processes that deal with magic itself. It also can be used to represent the transformative touch of magic - rites which change one thing into another or in which alchemy plays a large part are commonly those in which the Wyrm is invoked. 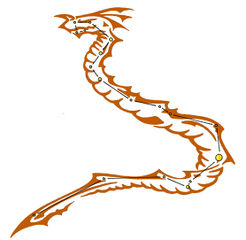 Tulpas of The Great Wyrm

The Great Wyrm manifests thoughforms either as streamer-like, ephemeral snake-like beings that flutter through the air, or as humanoids, scaled in shimmering rainbows. The Feather-Snake of Brass Coast legend and the Mirrorman of the League are all known tulpas of the Great Wyrm. The Suaq believe the shimmering curtains of light that sometimes light the northern night are an aspect of the Wyrm too.

The Great Wyrm transforms everything it touches and that includes ritualists. Mostly these transformations are mental; opinions shift, attitudes alter. There are rumours, however, of a Highborn ritualist who, after invoking the Great Wyrm in a large ritual, found himself abruptly manifesting lineage.