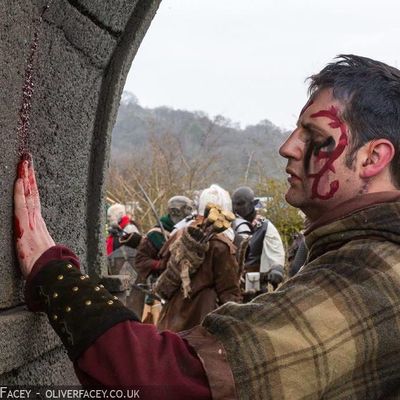 A versatile spell, invaluable to the magical investigator.

This simple divination is invariably the first one that a magician learns to cast. Every magician is able to cast it; along with operate portal and create bond, it represents a shared suite of powers common to everyone who works magic. Being able to perceive magical auras is a key part of learning to cast spells and perform rituals. Once an apprentice magician masters the ability to attune their perceptions to magic, the spell allows them to perform a number of simple functions relating to magical energies.

While many magicians think of magical auras in terms of visual effects, the experience of detecting magic is highly personal. Some magicians, especially those who have studied the music of the spheres, interpret magical effects in terms of musical notes. Magicians with naga lineages in particular are known for their discerning senses and report feeling, smelling or even tasting magical auras through the use of this spell.

For all its versatility, a magical investigator can rapidly deplete their store of personal mana. Anyone who wants to specialise in this kind of divination may want to invest in a Seer's Probe which allows the wielder to cast extra detect magic spells in a day (and, as a bonus, grants access to voice for the dead as well).

Finally, it is worth noting that perception of magical auras is not restricted to magicians - the Magpie Infusion is a herbal preparation that can be used to duplicate the effect of detect magic in a limited fashion.

This flexible spell can be used to perform a number of separate tasks, but only one may be used each time the spell is cast. Each of these uses requires the assistance of a referee.

By casting the spell on a single target that is close enough to touch, you can determine the name of any specific rituals or ceremonies that could be used to discover more information about it. This effect only reveals the name of rituals that are in Imperial lore. Certain rituals (Ties that Bind, Hand of the Maker, the Insight ceremony) will almost always provide information and are only mentioned if there is explicit extra information to be uncovered.

Divination will also name other ways of gathering information. For example, it will reveal whether there is information to be gathered about an item using the Insight ceremony, or whether an arcane projection in a certain realm and of a certain magnitude might be used to learn more about an effect.

By casting the spell on a single target that is close enough to touch, you determine the level and realm of any ritual enchantment on the target. If the enchantment is the result of a boon from an eternal, the spell will reveal this and the realm the eternal is associated with.

You can use this spell to discern the magnitude and realm of a ritual that is being cast if you are close enough to hear the words of the ritual.

You may cast this spell on a single target to determine if they have an Arcane Mark, and whether than arcane mark is the same as your own (assuming you have one). When cast for this specific purpose, it does not discover any other information about enchantments on the target. This use of detect magic is closely tied to the Right of Challenge of the members of the Conclave orders.

Detect Magic can also be used to interact with the Sentinel Gate, the powerful teleportation portal that stands in Anvil and allows characters to quest and take part in battles. When you use the spell in this way, you can ask a referee if a specific conjunction is anticipated. You must specify as exactly as possible the destination you are looking for - it is not enough to just name a territory or region. For example, you might ask if there will be a conjunction to "The shrouded glen, on the outskirts of Mournstead in Liathaven" - it is not enough to just ask if there is a conjunction to Liathaven or Liath's Ring. When used in this way, the referee will tell you if there is a conjunction; when it will open; how many people may pass through it; and any special circumstances that related to that conjunction.

Some effects can conceal information from detect magic, but in that case the presence of the obscuring effect itself is always detected by this spell. There are no enchantments that will cause detect magic to give false information.

If the spell targets an item, and that item is under the effect of Mark of Ownership, then details of that mark are revealed in addition to any other information sought with the specific spell use.

The following are sample vocals you can use to cast this spell if you don't want to make up your own.