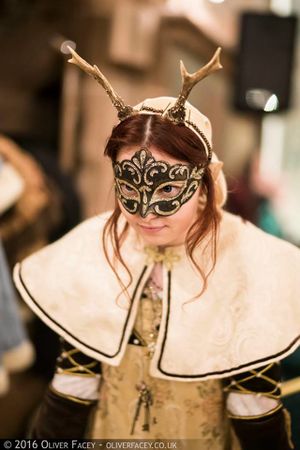 The Doctor is calm, but she is also intensely focused.

The doctor is one of the personae used in dramaturgy. While the character is usually referred to as female, regardless of the gender of the thespian taking the role, within the narrative she may be of any gender; often, as with many dramaturgical characters, the gender is irrelevant to the story as a whole to allow any ritualist to take the role.

Character: The Doctor is calm, reasonable and above all dedicated to the idea that sufficient knowledge can be used to overcome any problem. Confident in her own skills, the Doctor also knows her limits and when to seek aid and outside sources of knowledge. Most often she dispenses aid to others, whether they appreciate or ask for that aid or not.

The Doctor is a woman of peace, and will never willingly causes harm to another; where harm must be caused, she always tries to do as little as possible. The Doctor has often taken an oath or promise by which she is in some way bound. Sometimes this oath causes complications to arise, or leads to her doom.

In street theatre, she is often a sinister figure who possesses secret knowledge. She is rarely the butt of a joke, and she may spell the doom of a foolish or unwise character, or the final punishment of a wicked character.

One widely held theatre myth states that if the Doctor opens his bag onstage, one of the cast will die within the year.

Magical Associations: She is used in ritual where magic is brutal or efficient; despite her apparent profession, she is not necessarily used in magic that deals with healing. More often she is used in divinations or curses, or extracts a binding promise from someone as part of a ritual that deals with oaths, or that punishes the wicked or corrupt. She represents scholars, and the virtues of Wisdom and Vigilance.

Realms: The doctor is associated with day (knowledge, diagnosis) and winter (cutting out infection, death).

Identities: As one of the personae, the doctor usually appears named after one of the four rivers. Her name influences her character, which in turn influences the magical role she plays.

Trappings: Her clothing is well cut but sober, usually in black with white trimmings. Her mask is usually hooked and curved like a beak, and she often wears gloves. The Doctor speaks softly and with an educated tone. she carries a cane and a bag which is never opened.

As with all personae, a troupe is likely to have a specific mask they use to portray the Doctor.

Other Identities: The doctor may appear in a role associated with wisdom and knowledge. For example, she sometimes appears as a sage or scholar, a civil servant, as an apothecary, as a teacher or as a parent. In other parts of the Empire she usually remains a doctor, but she may also appear as a monk in The Marches.

The Doctor may sometimes take on the guise of Death. Although dutiful, Death is usually sympathetic. Her presence is typically ignored by other players, although she may speak from time to time. When she lays hands upon another character, then their time has come. Sometimes she agrees to a contest or game to stave off a character's death, and in rituals of healing she is sometimes vanquished or trapped.

In the Brass Coast Death is a figure of fun, a bumbling idiot and a clown who can easily be outwitted through courage and cunning. In this guise, she is often found in the company of Fortune, her mercurial lover.