The most popular form of ritual magic in The League is dramaturgy - an elaborate form of theatre where a series of characters, settings and items are imbued with symbolic and mystic significance which is used to shape the flow of magic. In classic dramaturgy, there are a set of recognisable characters, situations and items whose shared recognition fuels the magic of the ritual.

Six characters - called the personae - are central to dramaturgy, and at least one of them appears as the protagonist of a piece of theatre. The others appear as part of a supporting cast who may act favourably, neutrally or antagonistically to the protagonist depending on their nature and associations. One character - the Fool - acts as an invisible narrator when exposition is needed, and often represents the ritualists themselves. The fool is a commentator who shapes the drama, and thus the magic of the ritual.

Dramaturgy is sometimes used overtly, but it may also occur subtly. A League troupe will present an entire play or opera in which only one or at most a few key scenes are actually part of the magical working they are performing. They challenge onlookers to guess which elements are significant, and to unravel the magical purpose of their working.

Outside the League, similar principles are used to weave narrative power into rituals. Storytelling has power, whether it comes through the medium of drama or the recitation of a sagas, songs or even the invocation of heroes, paragons and exemplars.

As with all magical traditions, you do not have to use dramaturgy if you don't want to. This is a shared framework that magicians can use to add significance to their rituals, not a prescriptive list of elements that must be included or your ritual will fail. 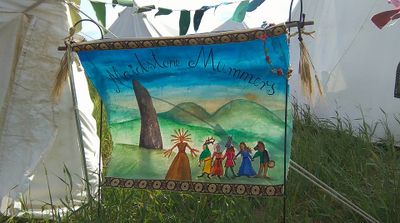 Practitioners of dramaturgy in the Marches are commonly known as mummers.

Dramaturgy beyond the League

This discussion focuses on League dramaturgy, but this form of ritual magic is also used in parts of The Marches, in Dawn and in Wintermark.

In The Marches, dramaturgy is sometimes practiced by mummers. Bands of mummers, maintain an itinerant existence as magicians and entertainers, much closer in feel to the mountebanks of the League than their troupe-magicians. They pride themselves on working magic through improvisation, without scripts but with a strong intuitive feel for the stories they create and the roles they use to work their magic. League troupes look down on mummers, considering them to lack subtlety, finesse or style.

In Dawn, some yeofolk practice rituals almost indistinguishable from their Marcher counterparts, but call themselves guisers to try and distance themselves. These guisers tend to weave more formal dramatic conceits into their rituals, and may sometimes work with a Troubadour as fellow-entertainers or supporters. By working with a priest, the guisers gain a measure of respectability. There is generally little affection between bands of guisers and weaver cabals.

In Wintermark, and to a degree in Varushka, dramaturgy exists more often in the form of storytelling and the singing of sagas, rather than in dramatic productions. A single ritualist, or a small coven will weave a tale through words and voice rather than by taking on the role of a character. A common performance style is for a single ritualist (often a scop or volhov to narrate a story while the other members of the coven take on symbolic roles within that story. Again, the roles are usually recognisable to students of dramaturgy, although as with mumming and guising, they are seen as poor substitutes for true dramaturgy. 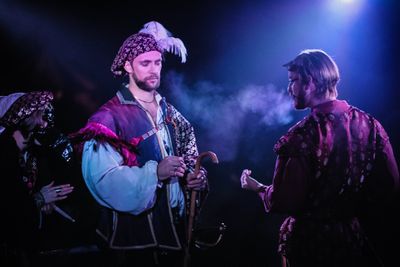 Dramaturgy creates magic through narrative use of specific symbols.

At its core, dramaturgy is the practice of using narrative to create magic. Some troupes revel in the complexity and cleverness of constructing a hidden ritual-within-a-ritual, but this is unnecessary for the practice of dramaturgy. A coterie of mountebanks on a street corner performing an improvised comedic routine with three actors and a small dog are just as capable of enacting Rivers of Gold as a full operatic performance of The Palace of Thieves in a gilded opera house.

Whatever variant of dramaturgy is employed, there are three constants. A tale is told, that has symbolic connection to the magic being worked; a connection is made between the ritualists and archetypal characters or iconic places, things and activities; and an audience is drawn into the ritual, their presence and focus granting additional power to the ritual working.

The Rule of Three

When selecting elements for the ritual, one must include the correct throne for the realm of magic being performed. At least two other elements must be symbolically pertinent as well. You can include as many irrelevant elements as you please, but at least three things that the audience sees must be recognisably congruent with the intention of the ritual. This means that small Troupes with few resources are much more obvious in their intentions, while large and wealthy troupes can put on enormous performances, subtly hiding their magical intentions through misdirection.

But as they Mountebanks are fond of saying, the best way to slip something past an observer is to keep them focused on what your other hand is doing, and even a small troupe can use their wits to fool an audience into putting its attention elsewhere.

The personae are the protagonists, and they form the focus of the ritual. They tend to each have their own mask, and they represent the magic itself - the intent of the ritualists. In the League they almost invariably bear the name of one of the four rivers that flow into the Bay of Catazar, and their identities change depending on which name they are given. Other characters may be named after a river, but this is usually done to obfuscate the intent of the ritual.

Instruments is the term that League Troupes use to refer to their physical props; a collection of specific items which are as much a part of the cast as the players themselves. Many groups have a collection of items which has been handed down through their history, and they are usually stored with great care and reverence - it is not uncommon for one or more of them to be enchanted items that assist with ritual magic.

Many dramaturgists believe that the instruments, through repeatedly being involved in rituals, pick up some of the magic they are used with. They take on a kind of life of their own, becoming members of the troupe in their own right. When an instrument is broken or worn beyond repair, League Troupes perform a funeral with great ceremony for it, attending masked and dressed as dramaturgical characters enacting a tragic play. This is performed with all seriousness; the 'dead' instrument is eulogised in the same way a dead actor might be remembered, buried with great ceremony and a wake is held that night, before a replacement is 'welcomed' to the troupe the following day.

The instruments represent the method of the magic. For example, the cloak represents concealment while the cup represents restoration, enchantment or transfer of power. Subtle and intricate messages can be created by passing an item between characters - as with all things dramaturgical it is a point of pride to many writers to prove their cleverness by the complex interactions of Instruments and characters on stage.

There are six settings for dramaturgical rituals, each one representing a Realm of magic. The throne usually matches the realm of the ritual, but not always; when performing the Autumn curse Like Water Through Your Fingers, some dramaturgy troupes will set the ritual in the counting house (because it is an Autumn ritual),wheras others will set it in the tomb (because it is a curse). Some companies might choose to use backdrops or props to evoke the various settings, while others might simply choose to express it in a minimalist fashion through dialogue and story - if they cannot evoke the throne through their actions, they argue, then they are poor dramaturgists.

The Chorus represents minor characters who move the narrative forward. They represent events in the dramaturgical working - they assist or hinder the protagonist, and they encompass the subtleties of the ritual.

When they are allied with the protagonist they are benefices, and when they are opposed to the protagonist they are malefactors. A member of the chorus with its own agenda is called a fortune, and tends to represent chance or fate. Characterisation and appearance can vary wildly depending on the troupe or the play. They often appear unmasked, and a troupe challenges themselves by making the identity of the chorus obvious through action and dialogue rather than easily-recognisable costume elements.

In theatrical performances, they often end up as clowns or entertainers whose japes serve to amuse the audience while a scene changes or the actors prepare themselves for new roles. Some of the chorus characters reflect lesser versions of personae. Two in particular are worth mentioning however, the Beast and the Fool.

Without subtlety, mercy or indeed any redeeming qualities, the Beast represents villainy in its most profound and horrifying form. It may represent a literal beast; the evil that lairs in the hearts of men; the lurking fear of the unknown; a curse; a hidden enemy; or the threat posed by untamed and unleashed natural forces.

Traditionally portrayed as an orc in many plays, this tendency has fallen out of fashion in recent years, and now generally the beast appears as a human of monstrous appetites and unrestrained desires. There is little subtlety in this character, but the beast may appear not only as a cruel warrior, but as an abusive parent or spouse or a tyrannical overlord. The conquest of the beast is often the climax of a play, or a ritual. Some traditions portray the beast as a nightmarish horror with a mask made from the skull of a horse, hung in ribbons and occasionally bells, representing unknown supernatural forces or malign spiritual energies.

The Fool is technically a member of the chorus, but deserves special mention. The Fool stands apart from all the rest, and is invisible to the other characters. They act as narrator and commentator on the action. The Fool can be likened to the Chorus of Greek Drama, continually breaking the fourth wall and urging the audience to engage with the narrative.

The Fool sometimes pauses the play and walks unseen through the frozen characters, commenting on their pasts, actions and destinies; in some troupes he can move the characters to indicate a change of scenery or the passage of time.

He is the only member of the cast to appear unmasked, and usually wears a simple white robe or tabard. Not all troupes include the Fool - the role is especially unpopular in Holberg where it is considered an example of overly-clever Sarvosan pretentiousness.

The fool might be considered the counterpart of the Blank Rune in the Wintermark runeset. In Tassato and Temeschwar, the Beast and the Fool are often played by the same cast member.