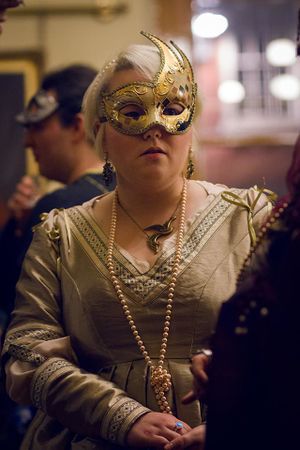 Clad in white and gold, the Bishop symbolises the power of faith.

The Bishop is one of the personae used in dramaturgy. While the character is usually referred to as male, regardless of the gender of the thespian taking the role, within the narrative she may be of either gender; often, as with many dramaturgical characters, the gender is irrelvant to the story as a whole to allow any ritualist to take the role.

Character: While The Prince represents powers temporal, the Bishop symbolises the power of faith and the church. He is a serious and commanding presence, often providing moral commentary on the deeds of the other characters. He speaks about the soul and the heart, and about the motivations that drive people to act. He is often shown dealing with a dilemma of spirituality, faith or duty that leaves him torn between action and inaction. The resolution of that dilemma may form the core of a play in which he is the protagonist. He is often in opposition to the practicality and expediency of The Prince, or the foolish excesses of The Mountebank.

When the Bishop resolves his dilemma, he offers strength to others. His righteousness helps other characters commit to their own course of action - he supports and enhances their qualities once he has overcome his own weaknesses. He often overturns corrupt authority by revealing the weaknesses and corruption they seek to keep hidden, and by giving others the strength to resist oppression. He breaks down structures that are inefficient or powerless and helps people to build new lives.

Although he is spiritual, he is also rational - his mind is often changed, or his central dilemma resolved, through good advice, investigation or discovery of a previously-unknown fact.

He is also the spirit of the family, and often appears in the role of an older relative. Bonds between people that are founded on trust and respect are part of his domain.

Upright, strong and constant, he can be trapped by his own rigidity, and his sense of honour may become his undoing. In street theatre he is often pompous, but even then his heart is usually in the right place - he believes what he preaches even as he is made to look foolish because of the air of self-importance he gives himself.

Magical Associations: He is most used in rituals that deal with magic that strengthens, supports or reveals. He can be used to represent the Synod, faith or rationality. He is associated with the virtues of Vigilance, Wisdom, Loyalty and Pride.

Realms: The bishop is associated with summer (strength, majesty) and day (reason, discovery).

Identities: As one of the personae, the bishop usually appears named after one of the four rivers. Her name influences her character, which in turn influences the magical role she plays.

Trappings: Draped in white and gold, usually with a symbol of the faith. Even when he appears in a less prestigious role such as a beggar or mendicant, the colours of yellow and white recur. His mask is often quite minimalist, appearing more like a human face than anything more stylised. The Bishop almost always speaks the truth whenever he appears; in this regard he is often quite subversive.

As with all personae, a troupe is likely to have a specific mask they use to portray the Bishop..

Other Identities: He often appears as a beggar or mendicant who reveals hidden truths. in roles that include authority and rulership, and often represents off-stage forces outside the remit of the play. wise parent or grandparent, a nurse, or a loyal companion. In Dawn she is an enchanter, and in the Marches she is sometimes a friar but more often the Farmer.

The Servant with Two Masters

As a minor character, the Bishop may appear in the guise of the servant with two masters. The servant usually appears in pied or chequered clothing, or with a cloak split between two colours. At the play's beginning his clothes are immaculate but as it proceeds they become more and more dishevelled. He appears miserable and harried, often mopping at his face with a handkerchief.

The servant is torn between loyalties, often representing a core dilemma in the play that must be resolved (an example might be either lead from Romeo and Juliet who are torn between family and love). In magic, the character may represent a moral or philosophical dilemma that must be overcome to uncover a truth or surmount a challenge.

A popular superstition among League troupes suggests that a person with a guilty conscience will fidget when this character is onstage.

The Bishop may appear as the Wise Councillor. Often played by the most senior member of the troupe, the Wise Councillor is usually costumed in dignified finery, with the trappings of age and status. If male, the player often dons a long white beard, and he usually walks supported by a staff or a walking stick. The Wise Councillor is often a senior relative of one of the major characters, and his role is often to provide key information or help at a critical point in the narrative. Mentally alert but often played as physically frail, sometimes he can be the victim of the Mountebank or Beast.

As with other versions of the Bishop, this figure will often serve to lay out the central dilemma, offer solutions to it, or refuse to be tempted to perform inappropriate action even if the result of doing so is tragic. His advice is often ignored, especially in a ritual designed to lay a curse on a hapless, unwise or foolish protagonist.