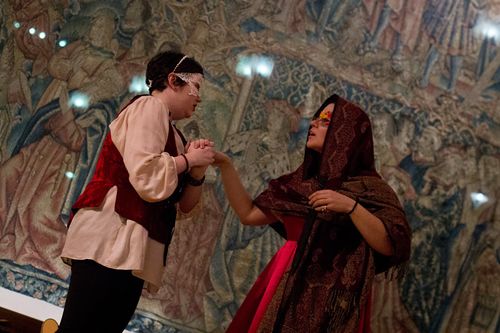 "Have you ever been to Mestra?"

The cloak is one of the instruments of dramaturgy. As such it often represents the method used in a magical ritual. A troupe will often have a specific prop that they use for the cloak whenever it appears, and may in time come to treat the inanimate object a little like a member of the cast.

Appearance: Often a dark coloured or plain garment with a vivid and contrasting lining, the Cloak can add a great deal of drama as it is donned and discarded by various characters. It can be distinguished from the other costumes by the ceremony with which it is handled, and the part it plays in the drama. It is the key instrument in tales of mistaken identity, subterfuge and deceit.

Meanings: The Cloak represents the donning of a role, such as a mantle of authority, and also disguise and concealment. it also represents defence, or defensive qualities; in some cases it is replaced with armour, and in Dawn it is often a favour, rather than a cloak, and is used extensively to enhance and support.

When worn by The Captain, the cloak explicitly represents defence (it is often carried in his off-hand for a duel, for example) and for rituals that grand endurance or fortitude. For The Prince, it stands for secular authority, command of others, and sometimes used with rituals that summon supernatural troops.. On The Bishop it represents religious authority, most obviously with rituals such as Mantle of the Golden Orator or Chasuble of Majesty. For The Doctor it means comfort and protection when given to another, or the authority to deliver punishment or curses. With The Witch it represents transformation, disguise or occasionally magic that misdirects. For The Mountebank it signifies subterfuge, deception or concealment; it is often used to steal or hide another instrument or character