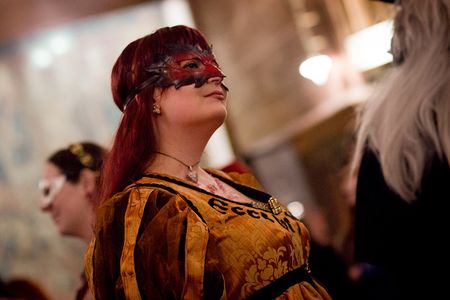 The captain is one of the personae used in dramaturgy. While the character is usually referred to as male, regardless of the gender of the thespian taking the role, within the narrative he may be of any gender; often, as with many dramaturgical characters, the gender is irrelevant to the story as a whole to allow any ritualist to take the role.

Character: The captain is probably the most popular character among League troupes. He is often a truly good character - likable, honourable and brave, ready to dash into danger at a moment's notice to rescue a friend or ally.

His simple and trusting nature is often his undoing, and particularly in street theatre he can become a figure of fun as he is exploited by those around him.

Generally, though, he is assisted by those whose loyalty he has earned, and generally his deeds come to a happy conclusion.

Magical Associations: In ritual the captain is often associated with war and fighting; military endeavour whether armies or champions, and disasters that must be overcome; the virtues of Courage and Loyalty.

Realms: The captain is associated with summer (strength, warfare) and spring (straightforwardness, vitality).

Identities: As one of the personae, the captain usually appears named after one of the four rivers. His name influences his character, which in turn influences the magical role he plays.

Trappings: The captain is usually armed. He rarely wears full harness, but his costume almost always includes a piece of armour - a breastplate, a pair of gauntlets or a helmet.

As with all personae, a troupe is likely to have a specific mask they use to portray the Captain.

Other Identities: In The Marches, the mummers present the captain as The Yeoman - the everyman, the down-to-earth, honest, hard-working salt-of-the-soil. In Dawn the guisers represent him as The Knight, and he is often engaged in overcoming a challenge or a test of mettle, ardour or resolve. In Wintermark tales, he is The Hero (or The Heroine) and as with the Knight is usually involved in a challenge or heroic test of some sort.

The Captain sometimes appears in the guise of the rival. A rather straightforward dark mirror of the hero of the play, the Rival is a direct and open enemy to the Persona. Unlike many of the other malefactors, he is honest and sporting, and while he desperately desires the destruction of his enemy, he is not willing to compromise his principles in order to do so. While often the story calls for his death it is generally done sympathetically and redemptively. The rival is often dressed in a similar costume to the main character of the play.

The Captain and the Rival may both appear in the same ritual; in this case the same ritualist usually portrays both characters, shifting masks as his role in the play changes.

A straightforward, solid and reliable individual, the squire is the right-hand-man of the Persona. Loyal, utterly trustworthy and above reproach, he symbolises loyalty and the bonds of friendship and servitude. Usually soft-spoken and dressed in blue, he often represents a banner or soldier.

In some plays, the Persona is duped into thinking that the Squire is working against them, with tragic consequences; this is especially true if the ritual is intended to damage or steal from a personal resource. Sometimes the Squire gives his loyalty to an unworthy individual, and while such tales are also often tragic, the object of the Squire's loyalty is usually redeemed by the transformative power of that virtue.

The Silver Mask is akin to the Captain, but with hidden depths. She is not as simple and trusting as she seems, and those who would influence her tend to see their own traits reflected in her rather than perceiving her true intent; such would-be manipulators come to a sticky end. She may initially serve a villain or antagonist, whom she later betrays due to her hidden principles. Unlike the Squire, the Silver Mask never redeems an unworthy target of her initial loyalties; she punishes or kills. In her most complex depictions, the Silver Mask does not exist at all - she is a figment or phantasm imagined by the play's real hero, a mirror onto which he projects his struggle to do good in a world that pushes him to act selfishly and immorally.

The Silver Mask is usually masked in character. Unlike many other personae, the mask may be remarked on by other characters in the play. Despite the name, that mask is rarely actually silver - instead, the persona usually bears a small mirror or other highly reflective surface somewhere about her.