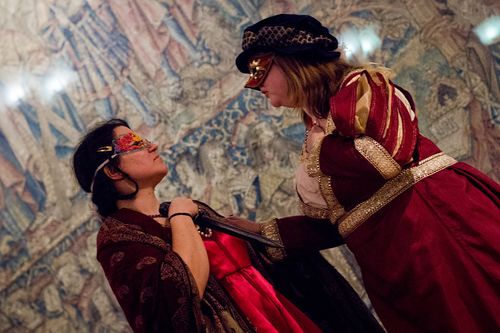 The blade is one of the instruments or dramaturgy. As such it often represents the method used in a magical ritual. A troupe will often have a specific prop that they use for the blade whenever it appears, and may in time come to treat the inanimate object a little like a member of the cast.

Appearance: A real weapon or a painted wooden prop, the Blade represents conflict, war and suffering. Some very theatrical troupes construct hinged or spring-loaded props which can transform rapidly from knife to sword and back again as it is handed back and forth. Some especially self-satisfied troupes have taken to replacing the blade with a letter, pamphlet or quill pen. This is more common in Sarvos than anywhere else and is sometimes called The Sarvosan Conceit when it is observed by troupes from other cities.

Meanings: The blade deals with conflict, war, suffering and combat but it also deals with healing and removal of obstacles. It has an element of sacrifice in it, and is a key to rituals such as Sorin's Rite of Agony that specifically involve a sacrifice,

When carried by The Captain, it represents individual combat, and powers that enhance combat skills such as The Swan's Cruel Wing. With The Prince it represents armies and nations at war, and so has a role in rituals such as Clarity of the Master Strategist. With The Bishop, it is often used to represent truth or righteousness, but also things that deal with alliances - Ambassadorial Gatekeeper for example,especially when performed on members of a banner with a strong connection to the Way. In the hands of a Mountebank it is military subterfuge, hidden knives and the like and may be used in a ritual such as Shroud of Mist and Shadow. In hands of The Doctor it becomes the Scalpel and is associated with the process of cutting away something bad to allow necessary and painful healing; it might be used with Black Iron Blade, Renewed Strength of the New Day or Vitality of Rushing Water with equal facility. When carried by The Witch it is called the Aetheme, and signifies magical authority and mastery over foreign spirits - such as those evoked with Clarion Call of Ivory and Dust or Conclave of Trees and Shadow.