Clarity of the Master Strategist

Clarity of the Master Strategist

Performing this ritual takes at least 10 minutes of roleplaying. This ritual targets an Imperial army. The general responsible for the army (or the egregore if the general is not at Anvil) must be present throughout.

During the ritual the casters must be in a strong Day regio.

This ritual places an enchantment on the soldiers of a campaign army that allows them to make and execute strategic and tactical plans more effectively. The target campaign army gains a boost to its combat ability equivalent to 2,000 additional soldiers but only for purposes of determining victory - that is, the army does not inflict additional casualties. The additional army strength granted by this enchantment is affected by the orders given to the army. While the effect is expressed as being equivalent to additional soldiers, this enchantment never reduces casualties suffered by the army.

The general used to focus this ritual experiences a short-lived roleplaying effect: they are immediately made aware of every single soldier and piece of equipment in the target campaign army, their status, readiness and prowess. This rush of information is often sufficient to knock a general off their feet or even cause a loss of consciousness, but fades entirely within around ten seconds. In some cases, a referee might use this opportunity to draw their attention to conditions or circumstances around the campaign army that may have plot implications.

This ritual can affect additional Imperial armies from the same empire. The general responsible for each army must be present throughout the ritual. Each additional target increases the magnitude by 60. 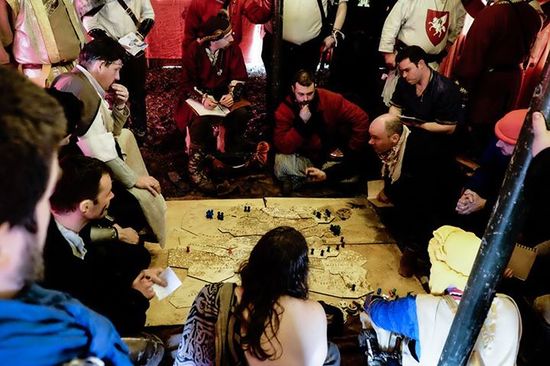 This ritual empowers and enhances an army, using the Imperial general as focus. Every soldier in the target army gains an increased awareness of their role within the army, and the needs of the army as a whole. Officers are aware of the status and needs of the soldiers who fight under them, and gain a much greater understanding of the purpose and goal of strategic and tactical decisions. Captains and commanders receive an even more wide-ranging awareness, being able to understand and collate information about enemy movements and strength, the effects of terrain and weather, and the probabilities of success for any given maneuver. The army does not become infallible, but it gains an unparalleled ability to work as a single unit and to make informed decisions about how best to proceed. This clarity extends to interactions both with other campaign armies and with soldiers who join the army later, helping them to integrate and allowing the commanders to make reasonable decisions about their abilities.

On the battlefield, warriors under this enchantment fight cohesively, and sometimes display a supernatural awareness of their surroundings, their fellow soldiers, and the overall progress of the battle.

When used to affect multiple generals, it draws power from a larger shared strategy. Even if the generals are not participating in the same campaign, they share an awareness of the situation in the other theatres of war that have a bearing - no matter how tenuous - on their own campaign. Including two generals who despise each other and refuse to co-operate may cause the ritual to fail completely.

This ritual is also sometimes called Ascent of the Pyramid, a reference to the Day eternal Sinokenon who is sometimes invoked during this ritual for its ability to perceive the many parts that make up a whole, and to assist in unifying those disparate agencies towards a single aim. More often, it is associated with the eternal Zakalwe whose philosophies of warfare are often expounded while the ritual is performed, and who is known to offer boons that empower its performance. 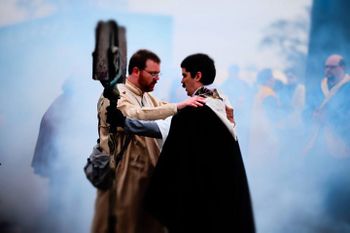 Clarity cuts through the fog of war.

This ritual enhances a campaign army, and the general of the target army serves as a vital focus for delivering the magic. It is common to include a banner or standard that will be used by the target force as a focus for the ritual. Other common elements include the invocation of Paragons and Exemplars of Vigilance and Loyalty, as well as the names of Day eternals associated with information such as Kimus and Sinokenon but most especially Zakalwe. Other elements include girding or crowning the military leader, the rhythmic beat of military drums, the presence of warriors from the same nation as the target as witnesses. Another common element is the use of crystals and mirrors to reflect parts of the ritual, slowly moving them towards a single location to symbolise the coming together of disparate elements.

The rune of thought, Aesh, is favoured for this ritual as are the Autumn runes Queros and Lann. The constellations of The Chain and The Three Sisters might be invoked, as might the characters of The Captain or The Doctor.