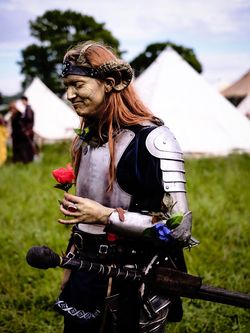 Flowers are often used as a symbol of love - or as a favour.

A favour is an effective talisman that can ward off curses and the pernicious influence of eternals but only if worn openly. The greater the affection that the donor feels for the recipient, the more effective the hearth magic becomes. Favours are also sometimes used to deliver curses, and there are plenty of tales of a stolen favour bringing ruin to the one who loses it.

Favours are almost always hand-made, and almost always by the person who will actually present it. A common favour is a strip of cloth which has been embroidered or painted by the donor, usually with something that symbolises the affection or respect they feel for the recipient. Flowers are sometimes given as favours between romantic partners, and the hearth magic is said to be reinforced by the affection the donor and recipient feel for each other.

A common practice with a favour is to include its presentation as part of a girding ceremony - the favour is usually the last piece of equipment attached during the ceremony. Likewise, ritual magic in Dawn that creates an enchantment is often reinforced by the presentation of a favour from the ritualists to the targets.

A specific example of this hearth magic is the special favour, created by nobles to be used as part of the Dawn senator elections. These favours are infused with the magic of the egregore, and used to show support for a candidate for the title of senator. Their magic fades over the course of a year, and is renewed annually depending on which territory a Dawnish noble calls home. 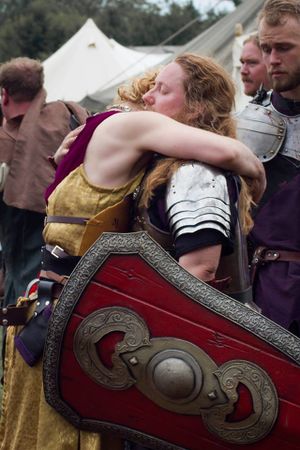 Love has a power all its own

Love is a powerful force in Dawn, and its inclusion in magic can make effects more potent but also more unpredictable. Romantic love is the most powerful and most unpredictable, as seen in some of the marriage customs, but filial love and even platonic love between friends have a power of their own. Dawnish tales talk of lovers or friends who return from death for a few moments to offer comfort or protect their loved ones, or to encourage them to seek vengeance on their betrayers. Love that is betrayed is said to give rise to curses of its own accord. Finally, love is said to be the one force that can bind souls together in the Labyrinth, and bonds of love may mean that two souls are reborn and driven to seek one another out through multiple incarnations. 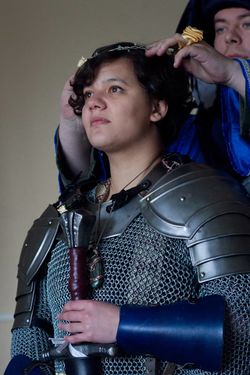 A knight becomes larger than life by girding themselves.

Flowers are often used as a symbol of love; not only romantic love, but also finer feelings such as loyalty or familial affection. Yellow flowers, especially roses, are commonly used as a representation of affection and respect devoid of romantic feelings. Golden flowers are a common element of jewellery given as a gift to a very close friend. In some cases, a Dawnish suitor will present the object of their affection with a flower representing their feelings. If those feelings are not reciprocated, a traditional way to show this is responding with a gift of yellow flowers - yeomen in particular favour a posey of buttercups to express fondness without passionate love.

Armour and shields are a hearth magic connected with identity in Dawn. Donning one's armour and girding oneself with weapons and armour before a battle, particularly with the assistance of friends and trusted companions, is seen as a way of "donning" a glorious persona. A knight becomes larger than life by girding themself in armour, and in a similar way a senator may "gird" themselves with fine robes, documents and a short dagger before addressing the Senate to create a powerful persona so that others can see their glory.

There are stories of people who put on another's armour - again engaging in the ritual of girding themself - and who either gain the strength of the person whose armour they are wearing, or perform some other great deed in their name, or who are mistaken for the person whose armour they don despite the unlikelihood of that actually happening. Most of these stories are romantic in nature, although several are tragedies in which someone dies in the place of their lover. A rare few are cautionary tales in which a villain masquerades as the hero to bring ruin down on her head after she has carelessly left her panoply where it may be stolen by her foe.