Dawn's forebears came from overseas, seeking to carve out a kingdom. Their early history is full of glorious battles, as noble houses fought against the orcs and drove them out of the fertile lands to found the kingdom. Rather than quarrel amongst themselves, the noble houses agreed to settle the throne's succession by tourney. The death of any ruling monarch would be followed by a grand tourney with the Earl of the winning house taking the crown. 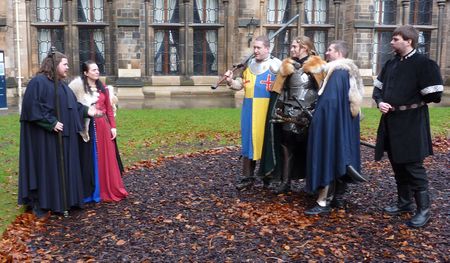 In the years that followed the founding of the Kingdom, a group of disaffected Yeomen chose to leave their lord's lands. They marched across the country, heading for the western borders and the fertile plains beyond. They were joined on their pilgrimage by hundreds more disgruntled yeomen and became known as the Marches. They had no real weapons or armour, and the nobility fully expected them to be slaughtered by orcs or die of starvation. Instead, the Marchers slaughtered the orcs they encountered and created a kingdom for themselves; the Marches, a patchwork of cleared lands controlled by a score of fractious yeoman households.

There were frequent but sporadic conflicts with the Marches in the centuries that followed. Occasionally one or the other would attempt to expand into the neighbouring nation's territory. To this day the westernmost parts of Dawn and the easternmost parts of the Marches are scattered with battlefields and castles that are largely abandoned since the formation of the Empire. Armed conflict is a thing of the past, with both the Marches and Dawn holding equal status within the Empire, but Dawnish who question the validity of their ancient traditions are often gently reminded that they could go and live in the Marches if they don't like it.

The story of Dawn's admittance to the Empire is considered one of the great romantic epics. Numerous songs, poems, stories and plays are written about it. The actual events have probably been blurred by the passage of time and the pens of the troubadours, but all agree that it hinged on the marriage of the First Empress to the former King of Dawn, Rodric of Astolat, called the Lame, a powerful Enchanter. 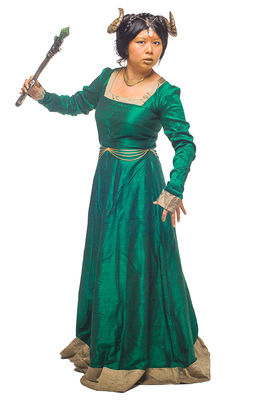 Gown by The Midgard Seamstress

According to the troubadours, Rodric was a bachelor with unreasonably high standards who looked destined to die unwed. When Cien, a naga yeoman with aspirations to be troubadour, came to Rodric for the Test of Mettle, he was challenged to find the king a suitable bride. The task seemed impossible but with the assistance of a Navarr guide, Cien returned with news of a Highguard woman who was the match for any Dawnish noble. Impressed by stories of the woman's prowess and fiery passion and smitten by Cien's description of her beauty, King Rodric vowed to make her his wife.

Acting on Cien's advice, the King ordered a splendid tourney in Astolat and invited all the powerful nobles of Dawn. The Empress arrived at the tourney in the company of Earl Elayne de Cervise but bearing the flag of Dawn, the traditional arms for a knight-errant. The king and everyone present was entranced by her power and bearing. Only nobles may enter the tourney, but before the assembled host, the Empress demanded a test of Mettle from Earl Cervise.

The Empress was challenged to make an impossible leap across the deep river that runs alongside the Castle of Roses, a traditional response for yeomen whose demands for a Test of Mettle were unwelcome. The Empress readily agreed; still wearing her armour she mounted her horse and together they jumped the river. The sight was so impressive - the more so for horses were practically unknown in Dawn - that it was impossible for any to deny her claim and she was accepted into the house of Cervise.

Cien urged his king to declare his ardour for the Empress before any other noble had chance to pledge a troth. Rodric declared his love for her and demanded the Test of Ardour from Earl Cervise. Before the assembled crowd, the Lady demanded the unthinkable - to prove his love for the new scion of the House Cervise, he must give up his throne - and granted Rodric until the start of the tourney to decide his response. The next morning, following a night of discourse with the Empress, Rodric agreed to abdicate his throne. In doing so he won the Test of Ardour and entered House Cervise as the Empress' husband, whereupon she declared her intention to enter the grand tourney to become Queen of Dawn.

In the tourney that followed, Rodric and his bride rallied Earls who favoured entry to the Empire to their side to oppose those Earls who resisted the idea. It was made clear to all that the tourney was not just for the throne but for the fate of Dawn. The battle was fierce, but the Empress' forces claimed the field, and she was crowned Queen.

In the weeks that followed she moved quickly to secure Dawn's place in the Empire, her victory in the grand tourney meant that even those Earls who had opposed her could not deny that she had followed the customs and traditions of Dawn and beaten them fairly.

Dawn has prospered under Imperial rule and grown in strength, gaining land as the barbarians have been driven back. When the Empire began to stagnate, the nation's emphasis on military strength meant that it was able to repulse the invaders. It is a source of enormous pride to the Dawnish that theirs is the only nation that has never lost a territory to the barbarians.

Dawn has often struggled to gain political support in the Senate. When Dawn armies successfully defeated the forces of the city of Holberg, League politicians were able to convince the Senate to assign the territory to League control. Despite support for Dawn from Wintermark and Varushka, a strong coalition of League and Marcher senators were able to convince Urizen and Highguard that the best thing for the Empire would be to allow Holberg to become part of the League.