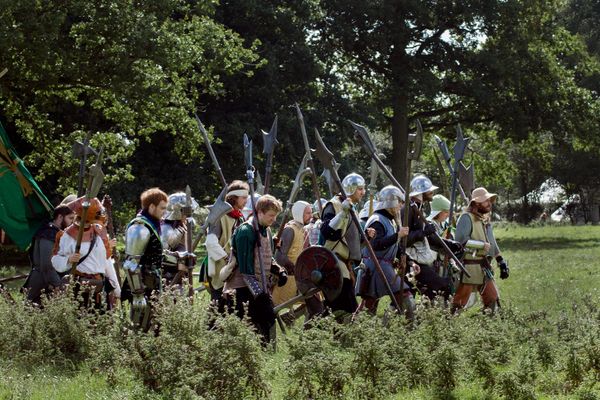 The exodus from Dawn gives the nation its name, and defines their stubborn independence.

The creation of the Marches

The history of the Marchers begins with a rebellion in Dawn of a group of disaffected yeomen determined to leave their lord's lands and make a better life for themselves. With nowhere else to go they marched across the country, heading for the border, intent on claiming land outside of Dawn. They were joined on their pilgrimage by thousands more, until they became known as the Marchers.

The first Marchers had few real weapons or pieces of armour between them. The Dawnish nobility fully expected them to flee the oncoming winter or die at the hands of the orcs. Instead, the Marchers took their farm tools and padded jacks and carved out a kingdom for themselves, slaughtering the orcs they encountered and driving them before them with grim determination. Working together they created the Marches, a patchwork of cleared lands controlled by a score of independent-minded yeoman households.

In the following centuries there were frequent but sporadic conflicts with Dawn. Occasionally one or the other would attempt to expand into the neighbouring nation's territory. To this day the easternmost parts of the Marches and the westernmost parts of Dawn are scattered with battlefields and castles that are largely abandoned since the formation of the Empire. Despite the conflicts and the tension, the two nations often refer to each other; Marchers who put on airs and graces are told to "Piss off to Dawn", while Dawn nobility or yeomen who question the validity of their ancient traditions are given equally earthy advice to move to the Marches.

There were also frequent battles between Marchers. Although Marcher households found it easy to unite against a common enemy, they often fell to quarrelling amongst themselves. Bitter feuds and grudges developed, usually over land and often paid in blood. By the time the Empress began her crusade the Marches was split into half a dozen great households, each supported by the loyalties of countless minor households. 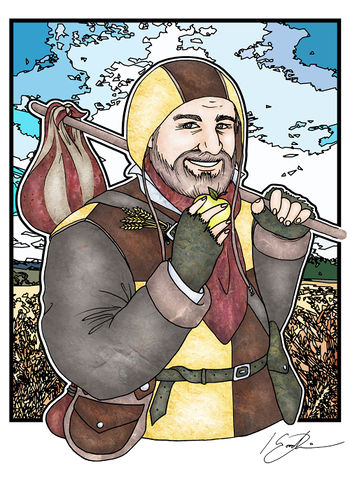 The First Empress did not come to the Marches. One of her advisors, a Landskeeper called Brigit of Dourfen, spread the word of her first gathering to the Marcher Stewards, and while several attended the majority did not. After hearing the Empress speak, the Marcherfolk who were present debated for several days and appointed Henry of Meade to speak for them. Approaching the Empress, he told her that some of the Marchers would join her, but that she would never get all of them. The Empress refused to accept this. "I will take all of you, or none of you." she said, and walked away.

Initially flabbergasted, wise Brigit explained what the Empress probably meant - that the Empire had no use for a divided land. It would not take some of the Marcher Households, and let the others squabble among themselves. If the Marchers were serious about joining, they would need to be united in doing so.

Historians sometimes debate whether the Empress should not simply have used her nascent army to unite the Marches herself, but it is generally agreed that doing so would have been a disaster. The Empire could not afford to become bogged down in a Marcher civil war; and the Marches traditionally are very hard to conquer for any period of time. Their dogged determination and ability to hold grudges would have meant that the Empire would have to have established a military dictatorship in perpetuity to keep the place under control.

The Marchers returned home and a civil war ensued (often referred to as the Cousin's War). Those Marcher Households and Landskeepers who sided with the Empress and her vision of a united humanity used diplomacy where they could, and force of arms where they could not. In the end, the forces of those who sided with the Empress were triumphant. The remaining Households drew up on the fields to the west of Dawn and the Empress marched out to meet them on foot with her standard bearer, and asked if they were prepared to join her Empire.

The Marches in the Empire

Marchers from Upwold were involved in the first campaign of the new Empire. Tom Drake of Redston led his household and the territory's Landskeepers to Varushka. They fought through unfamiliar forests, alongside all those who opposed Alderei the Fair and brought Varushka into the Empire. Some say it was Tom who killed the boyar-king; the Redston folk just point at the broken crown on their livery and let that speak for them.

Entry to the Empire brought some changes. Pious Marcher folk returning from pilgrimages to Highguard founded the monasteries which now dot the landscape. Friars have become an important part of most Households and few powerful Marcher households do not have one or more of these learned folk by their side. Imperial writ created the market towns, outside the control of the households. Yet the traditional beliefs that give the Marchers their strength have endured every transformation brought by the Empire.

Marchers on the Throne

Two Marchers have sat on the Imperial Throne, and their reigns could not have been more different.

The first Marcher to take the Throne was Emperor James of Mournwold. Appointed in 257YE, he was crowned as the Empire was in real danger of being destroyed by the barbarian orcs after decades of fruitless back-and-forth conquest and liberation. He is perhaps most famous for "fixing the borders", making it illegal for the Empire to add new territory until such time as the Senate and the Synod were both in agreement that the Empire was sufficiently strengthened as to be able to hold those territories. His reign issued in the Second Interregnum, just under twenty years of relative peace and prosperity for the entire Empire during which the Throne remained vacant.

The second Marcher Throne was Emperor Walter of Upwold. An effective businessman and Alderman, he was appointed only a short time ago in 371YE. His reign was very short, and very chaotic - he attempted to run the Empire like a business with near disastrous consequences. He is largely viewed as a failure and an embarrassment by the rest of the Marches. About the only good thing to come out of his reign was an awareness of just how much trouble the Empire was in - laying the groundwork for the appointment of Empress Britta and the resurgence that continues to this day.