These hardworked quarries are in Upwold near the border with Mournwold and within sight of the Old Pig in the Mournwold. They have long produced an unusually hard and well wearing creamy-coloured limestone that has become so famed as superb quality building stone that the name of the Quarry itself has become eponymous for all other caches of Sutton Stone that have been found. The limestone is seamed with white granite; while the quarries still produce limestone it is this latter material that the quarries focus on.

The Sutton Stone Quarries are scattered along the southern borders of Upwold. Since the Mournwold fell to the Jotun in 349YE, there have been several attempts by the barbarians to sieze the quarries for themselves. The last, during 372YE, resulted in significant losses to both the Imperial forces and the Jotun armies battling across the Heath. The Imperial forces successfully drove the Jotun back across the border after six months of vicious fighting, leaving several new barbarian burial mounds along the southern borders. 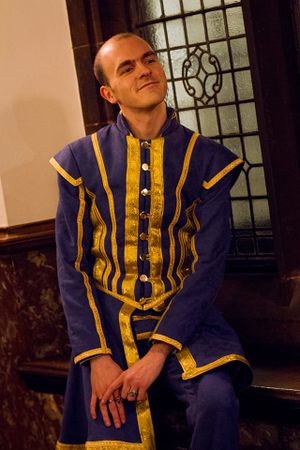 The Seat has no particular responsibilities; they simply receive a bounty of white granite which is theirs to do with as they will. If the Sutton Stone Quarries were to be threatened in any way, it would be the responsibility of the Seat to deal with those threats. Likewise, if any particular opportunity were to arise related to the Sutton Stone Quarries, the Seat would expect to be consulted as to how that opportunity might be resolved.

The Seat has control of a source of white granite and receives Bourse certificates to represent that control. They can dispense this resource as they choose. Production is 23 Imperial wains of white granite every season.

Custodianship of the Sutton Stone Quarries is retained for a year, or until the citizen holding the seat dies, or steps down. An Imperial Bourse seat cannot be revoked by the Imperial Synod.

This title is currently held by Katya Vasillova Reznikov; it will be reelected at Summer Solstice 384YE. The table to the right shows the citizens who have been elected to hold this title in the years since Empress Britta died.