The Marchers take a practical approach to religion.

Long before the foundation of the Empire, the people of the Marches looked to their friars for spiritual guidance. These plain spoken folk were often at the centre of the Marcher households. Although they worked their own land, they also provided spiritual advice and counsel to their fellow yeomen. Many also served as scholars for their communities, acting as a chirurgeon, assisting with the writing and interpretation of formal correspondence, and teaching letters and history to young children. Awareness of, and belief in, reincarnation was a strong component of Marcher faith even before The Way took hold. Today, some of these beliefs are seen as problematic by the Imperial Synod - especially the beliefs to do with reincarnation as trees or vermin - but the Marchers cleave to them with stubborn indifference to the criticism of foreign priests.

Following contact with Highborn wayfarers, many friars and undertook a pilgrimage to Bastion. Marcher folk are not easily impressed, but it is difficult to visit the great white towers of Bastion without being moved and inspired by their majestic spirituality, and soon other Marchers followed in their footsteps. Long discussions between the friars and the Highborn priests saw the legendary Marcher figure, Good Walder, recognised as a Paragon of Prosperity.

Upon returning from Highguard, some of these pilgrims founded the first monastery.

Today there are two distinct priestly traditions in the Marches. The friars live amongst the households and market towns, tend to their spiritual needs and exert gentle but far-reaching influence.

Monks live in politically powerful monasteries, their control of farmland granting them the power and influence of an equivalent household. 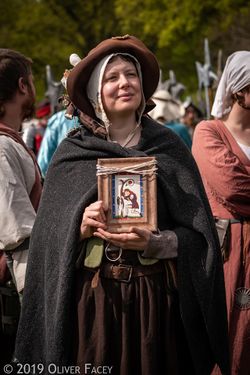 Not everything in the Marches is completely orthodox.

Marchers and the Way of Virtue

As with any adherents of the Way the Marchers believe that unvirtuous behaviour and unworthy thoughts stain the soul, and that a soul that has more dark deeds weighing on its conscience than virtuous deeds is deemed wicked, and faces a dreadful fate after death. However, some of the older pre-Imperial beliefs about reincarnation still linger.

Some of these beliefs are at odds with the orthodox beliefs in the Labyrinth of Ages, but do not directly contradict any of the Doctrines of the Faith and so does not fall under the definition of heresy. Friars who feel the need to defend these practice are often quick to emphasise the role of Pride, Loyalty and Courage that fills them.

A few Marchers continue to believe that a dead soul spends an amount of time being reborn as a non-human between lives. It was once thought that a virtuous soul is reborn as a tree, especially a fruit tree, and rests between lives (see funerals). An unvirtuous soul is reborn as a succession of vermin, vexing their descendants with foul behaviour and stealing the food from their mouths. These old beliefs have mostly been abandoned and few people talk about them openly but some Marcher folk continue to believe them and rats and crows are often killed on sight by Marchers as a consequence.

Another old Marcher tradition holds that dark deeds can be mitigated somewhat through the ceremony of shriving. Marcher folk disavow their actions and try to cleanse their souls through this practice. By unburdening oneself of the misbehaviour and dark thoughts to a willing person, a trusted friar or monk, one makes them complicit in the actions and shares some of the burden. Both souls are then stained by the deed, halving the burden between them. The assumption behind shriving is that the person offering absolution - usually a priest - will pursue a highly virtuous life and thus mitigate the effect of some dark marks on their soul. Following the acceptance of The Way, Friars of the Marches continued to perform shriving, and the practice has occasionally been taken up by priests in other nations.

May your sins be shared,
your burdened halved,
and your spirit guided
by the virtues.

from the Pickham shriving benediction

While liao is sometimes used during shriving, it is not generally accepted as a true liao ceremony in its own right. Rather, some priests adapt the dedication ceremony that allows a priest and a pilgrim to share virtuous dreams to gain greater insight into the darkness within the petitioner, and to gain a clearer understanding of the burden that is to be taken on.

Because of the burden taken on by the confessor, pious Marchers expect to pay for this service, and contributions to pay for the shared guilt have helped swell the coffers of the monasteries.

Another way to deal with unvirtuous behaviour, which has not traveled quite so well, is through sacrifice, most often in a wicker man. This sacrifice also allows for one person to take the spiritual taint of failure and unvirtous behaviour from several people and then absolve themselves - and their companions - through self-sacrifice. A Marcher who offers themselves as a sacrifice is believed by fellow Marcher to be completely purified by the act, passing immediately to their next life.

Initially our efforts to spread the Way in the Marches were fruitful.


Though they show little interest in the immortality of their soul
or the nature of the Labyrinth of Ages, there is clear evidence that
virtue, especially Loyalty, informs much of their culture. There are
also tales of a man they call Good Walder whose legend I would
submit to the Assembly as possible Exemplar of Prosperity. We
had even encouraged some to undertake a pilgrimage to Highguard.

Regrettably, the situation has become complicated when Sister
Ashara burned one of the false idols that they insist that their
children carry with them. Upon the child’s cry, a mob descended
upon the inn we are staying at. They beat upon the door as I write…

From the Epistles of Wayfarer Lucien


to the Winds of Virtue Chapter, 12BE